Damage to your DNA is unavoidable. Every day our cells are bombarded by gene-splitting UV radiation or chemical carcinogens. Regular water inside our bodies can cause DNA damage. DNA damage is as natural as waking up. Changes to our genes form the basis of evolution, but too many can cause fatal diseases, like cancer.

Yet our cells aren’t passive victims. This year’s Nobel Prize in chemistry has been awarded to Tomas Lindahl, Paul Modrich and Aziz Sancar — three scientists who helped unravel how our cells fight back. The discoveries were crucial to our understanding of hereditary disorders and cancer.

“This story has unraveled step by step, and the enormous importance has become more clear in recent years,” said Göran K. Hansson, Permanent Secretary of the Royal Swedish Academy of Sciences, who presented the prize this morning in Stockholm. 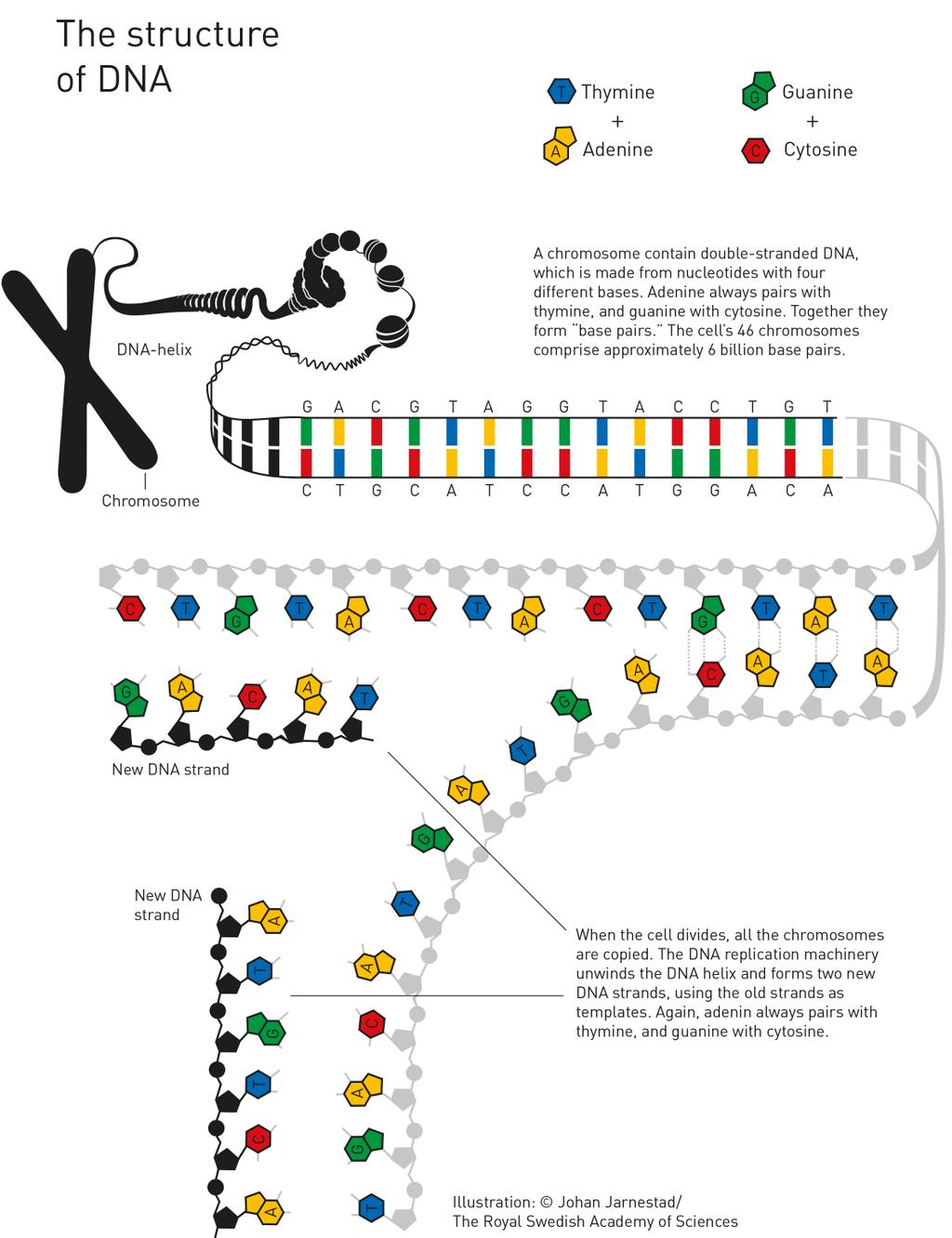 DNA replication explainer. DNA is like a long railroad track with base pairs as the individual rails. When a cell multiplies, it has machinery that unzips your DNA, splits the individual rails, and then tries to make copies of each side of the original tracks. Illustration by the Royal Swedish Academy of Sciences

Lindahl’s work came in the early 1970s, while he was investigating how fast our DNA decays.

“Lindahl estimated that there were thousands of potentially devastating injuries to the genome every day, a frequency that was clearly incompatible with human existence on Earth,” the Nobel committee wrote in an explainer.

Since life on Earth hasn’t devolved into a pile of mutated mush, Lindhal and his team suspected that cells in our bodies must have a method for repairing their DNA. By studying bacteria, these researchers discovered that DNA has a weakness where one of its base pairs — the characters in the genetic code — is easily mutated. Even normal water inside our cells can chemically react with DNA base pairs on a regular basis to trigger mutations. Lindhal’s team found a bacterial enzyme that excises and repairs these damaged links. This process was ultimately dubbed base excision repair. 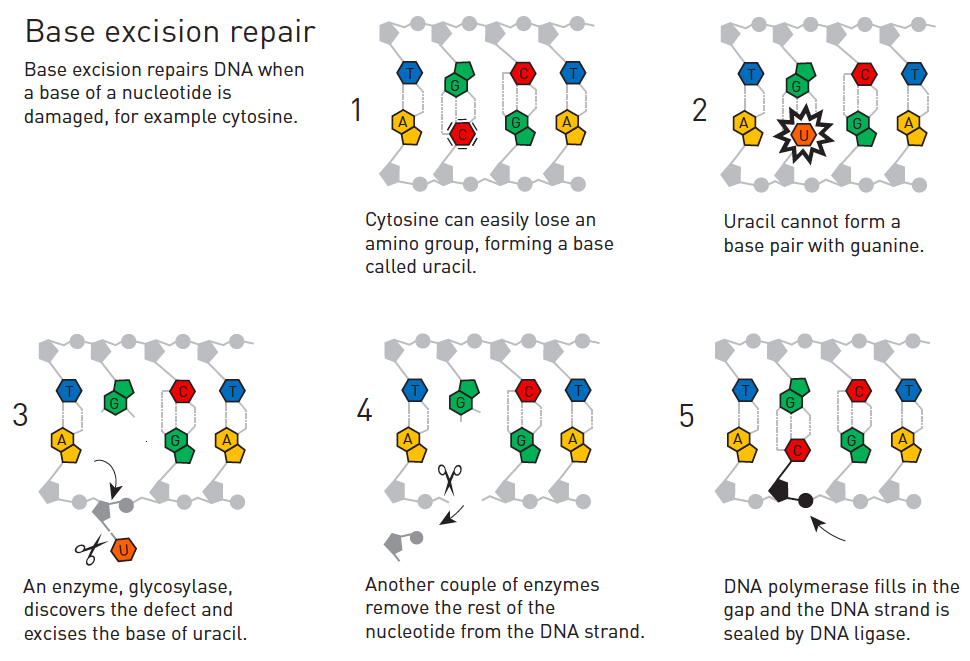 Base excision repair. Illustration by the Royal Swedish Academy of Sciences

Turkish scientist Aziz Sancar expanded this field by looking at how the environment influences DNA. His work would ultimately explain why tanning booths or too much time at the beach can be hazardous for your skin cells.

Sancar’s studies uncovered nucleotide excision repair, or the tools that cells use to repair DNA damaged by UV light. His investigation began as a graduate student at University of Texas in Dallas, where he isolated an enzyme in 1976 called photolyase that fixed DNA harmed by UV light. His early work was largely overlooked, and after failing to land a post-doctoral position, he joined a lab at Yale University as a technician.

Photolyase requires light to work, but Sancar’s colleagues at Yale were working with three genes for DNA repair that only work in the dark. The genes went by uvrA, uvrB and uvrC.

“Within a few years he had managed to identify, isolate and characterise the enzymes coded by the genes uvrA, uvrB and uvrC,” the Nobel committee wrote. “In ground-breaking…experiments he showed that these enzymes can identify a UV-damage, then making two incisions in the DNA strand, one on each side of the damaged part. A fragment of 12-13 nucleotides, including the injury, is then removed.”

Sancar published the work in 1983, which led to a professorship at the University of North Carolina at Chapel Hill, where he works today. 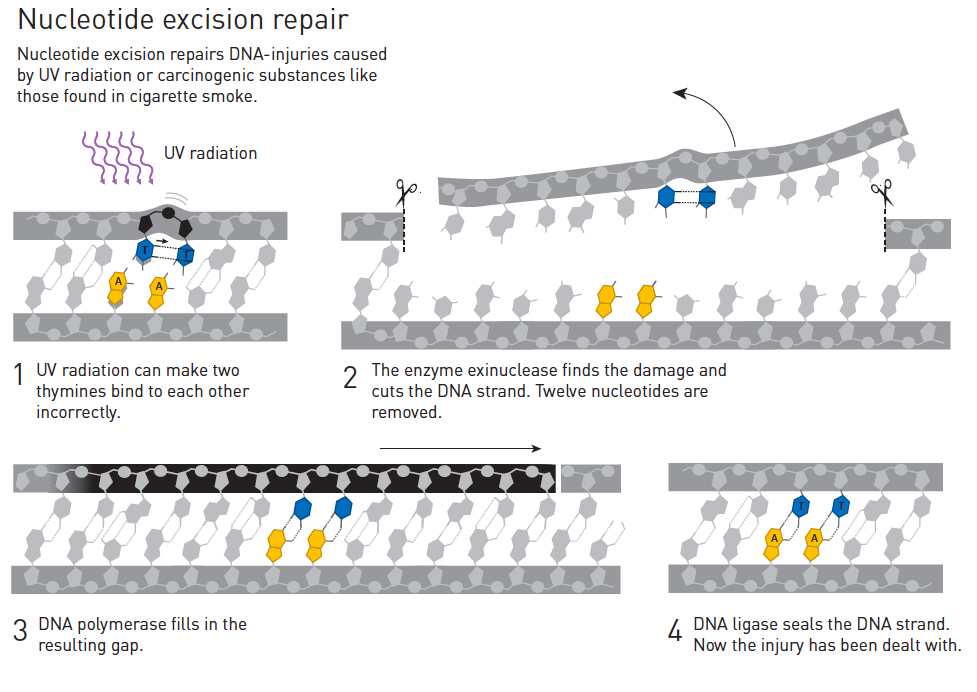 Paul Modrich’s motivation to study genes came from advice from this his father: “You should learn about this DNA stuff.”

Those words came in 1963, the year after James Watson and Francis Crick won the Nobel Prize for resolving the structure of DNA. Over the next three decades, Modrich and Harvard University molecular biologist Matthew Meselson would unpack what’s now known as “DNA mismatch repair.”

Paul Modrich got the news through e-mail that he had been awarded the 2015 #NobelPrize in Chemistry. INTERVIEW: https://t.co/bs1FWJ2CGt

DNA is like a long railroad track with base pairs as the individual rails. If placed in a single line, all of the DNA in an adult would stretch to the sun and back 250 times. When a cell multiplies, it has machinery that unzips your DNA, splits the individual rails, and then tries to make copies of each side of the original tracks. Together, Modrich and Meselson revealed that an enzyme in bacteria — Dam methylase — denotes the original sides of the DNA through a process called methylation. By doing so, other cellular systems can determine if any errors occur during the copying process. These errors are called mismatches.

“This mechanism, mismatch repair, reduces the error frequency during DNA replication by about a thousandfold,” the Nobel committee wrote. “Congenital defects in mismatch repair are known, for example, to cause a hereditary variant of colon cancer.” 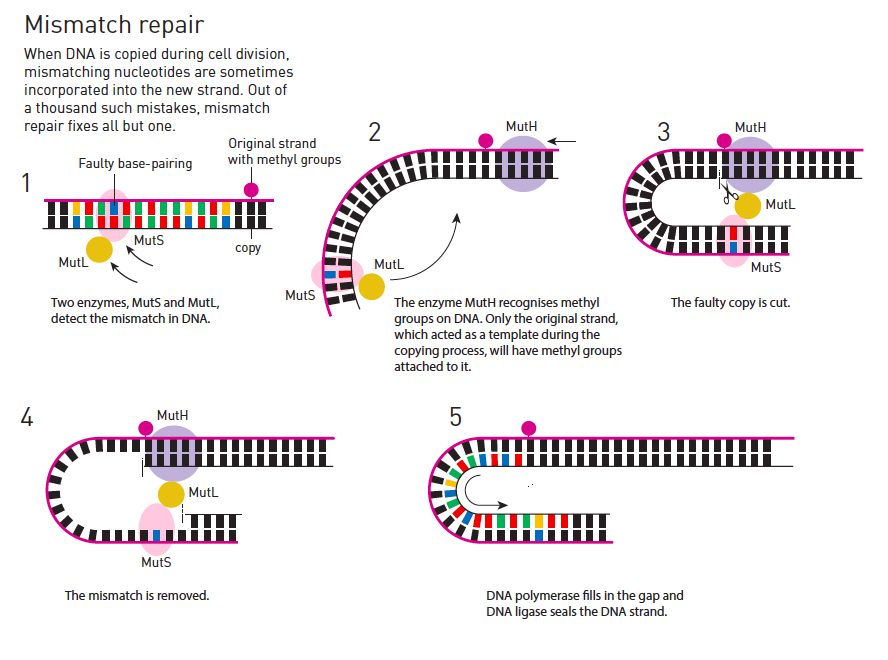 Mismatch repair. Illustration by the Royal Swedish Academy of Sciences

Modrich would continue his investigation into mismatch repair, and by the end of the 1980s, his lab had isolated several enzymes involved in the process. However, to this day, it’s still unknown how the original strands of DNA are identified in human cells, given our bodies use methylation for other purposes, such as silencing one of the two X-chromosomes in mammalian females.

All three projects played crucial roles in understanding how DNA repair influences human disease. Cancer, for instance, plays both sides of the DNA repair game. Cancer cells profit from abnormal DNA mutations, yet at the same time, these malignant cells keep their DNA repair systems intact, so they don’t die. By understanding that basic principle, this work allowed scientists to explain how environmental assaults, like cigarette smoke, trigger cancer.

“Cigarette smoke contains reactive small chemicals. They bind DNA and prevent DNA from being replicated properly. They are mutagens,” Lindhal said. “This can result in a number of diseases, including cancer.”