It’s been more than 12 years since NASA’s New Horizons probe left Earth on an expedition to Pluto, which at the time was the solar system’s ninth planet, and nearly three years since we saw the first images of the “planetary wonder.”

Yet there’s a bevy of details we’re only now still learning from New Horizons, according to those leading the mission — including the fact that visiting the dwarf planet almost never happened.

“There were many defeats along the way.”

In their new book “Chasing New Horizons,” mission leader Alan Stern and astrobiologist David Grinspoon divulge the most intimate accounts of the decades of planning needed for the Pluto probe.

The book recounts the mission’s emotional turbulence and seemingly endless roadblocks, such as when officials zeroed out funding for the project right when its proposal took off or when New Horizons went offline right before its flyby.

To give you a taste of their previously untold narrative–published on May 1— the PBS NewsHour compiled five aspects of New Horizons that you might not have known. 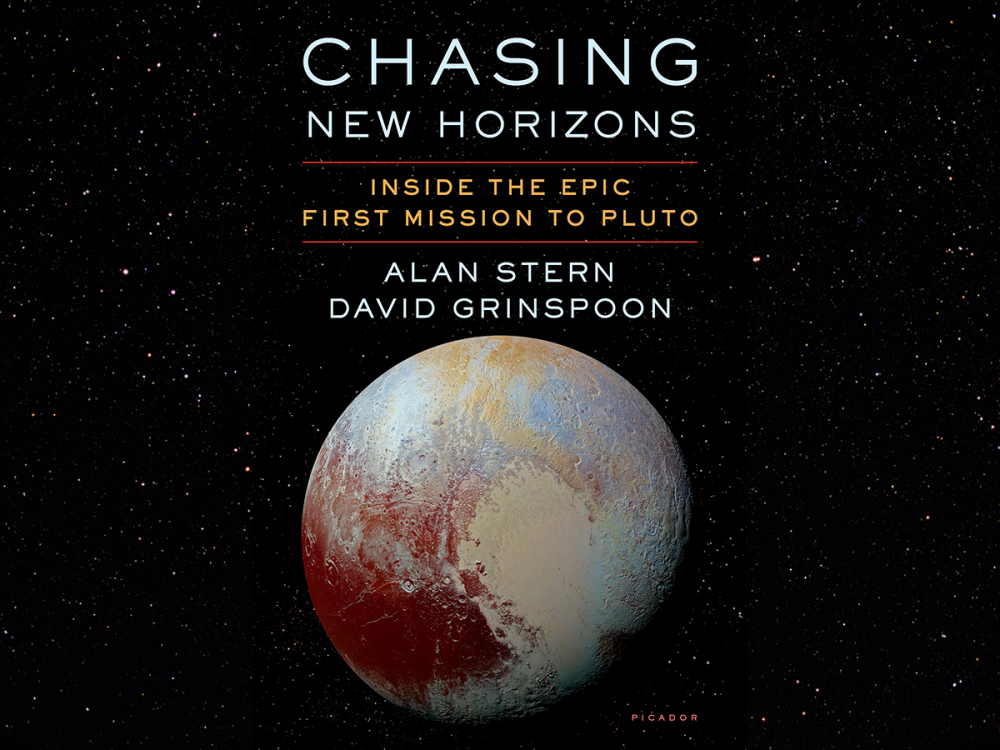 “Chasing New Horizons” was published May 1, 2018. Image provided by the National Air and Space Museum

Scientists at NASA’s Jet Propulsion Laboratory (JPL) proposed Pluto flybys as early as the 1960s, around the time the Voyager program came to fruition. They wanted to conduct a “Grand Tour” of the outer solar system: Jupiter, Saturn, Uranus, Neptune and Pluto.

Since that fateful day when New Horizons flew by Pluto, studies continue to spring up and new, stunning photos inspire fantasies about this small underexplored world. In their book, “Chasing New Horizons,” Stern and Grinspoon showcase some of NASA and the New Horizons team’s favorite discoveries. Here are their favorites:

Somewhere along the way, the scientists behind the Voyager dropped Pluto to study Saturn’s moon Titan — a world with a thick atmosphere and signs of organic molecules that could indicate life — instead. A mission to Pluto idled for years afterward.

Then, in the late 1970s, planetary scientists discovered that Pluto had a moon, Charon, boosting the then-ninth planet’s importance. By 1989, Stern and a group of NASA scientists — known as the “Pluto Underground” — agreed that they should shoot for a Pluto mission. But NASA’s upper management was skeptical on how worthwhile this mission could be.

Unlike Titan or other geologically active bodies known at the time, Pluto seemed like a hunk of rock. Was it worth millions of dollars to send a probe that far into the solar system for what might be a celestial dud?

“It was disappointing to me to learn that senior scientists insisted that a mission to Pluto wasn’t justified simply for its exploration value,” Stern wrote.

Thirteen years and six failed mission concepts later, engineers and scientists started working on New Horizons. During that period, JPL and Johns Hopkins University Applied Physics Laboratory (APL) battled over which probe design would lead the mission. APL’s design won, but was in a hard race against time: they had four years to construct and launch the vessel, while funding cuts and canned proposals throughout the George W. Bush and Clinton administrations kept threatening the mission.

Though interplanetary space exploration of Pluto stalled for a generation, Stern never let his dream of exploring Pluto die.

“The biggest quality that it took from all of us in the so-called Pluto Underground was determination,” Stern told the NewsHour. “There were many defeats along the way” that required a lot of labor and persistence, he added.

New Horizons is tiny and made of borrowed parts

Unlike most other early interplanetary missions, such as Pioneer, Mariner and Voyager, New Horizons launched solo. Limited federal funding and short time constraints meant scaling back the mission, so Stern’s team decided to send a single probe to Pluto. This plan was risky, so it had to be perfect.

In the end, New Horizons was built to be tiny by space exploration standards, weighing about as much as a piano. To accomplish so many science experiments on such a small spacecraft, APL engineers joined forces with the Southwest Research Institute (SwRI). They borrowed science instrument designs from other missions, such as the command system on MESSENGER at APL and the Alice ultraviolet spectrometer used for the Rosetta mission at SwRI.

This saved them time, money and resources so the team could put more focus on the new technologies needed for such a long mission. For instance, New Horizons can brag about its telecommunications system, which is one of the longest-range systems using NASA’s Deep Space Network to make long-distance calls back to Earth.

This system allowed the probe and ground-based crews to send streams of data back and forth at a relatively fast speed; each dispatch took nine hours to transmit. By mission’s end, the information collected during the Pluto flyby required more than a year of constant to communication to download to Earth. 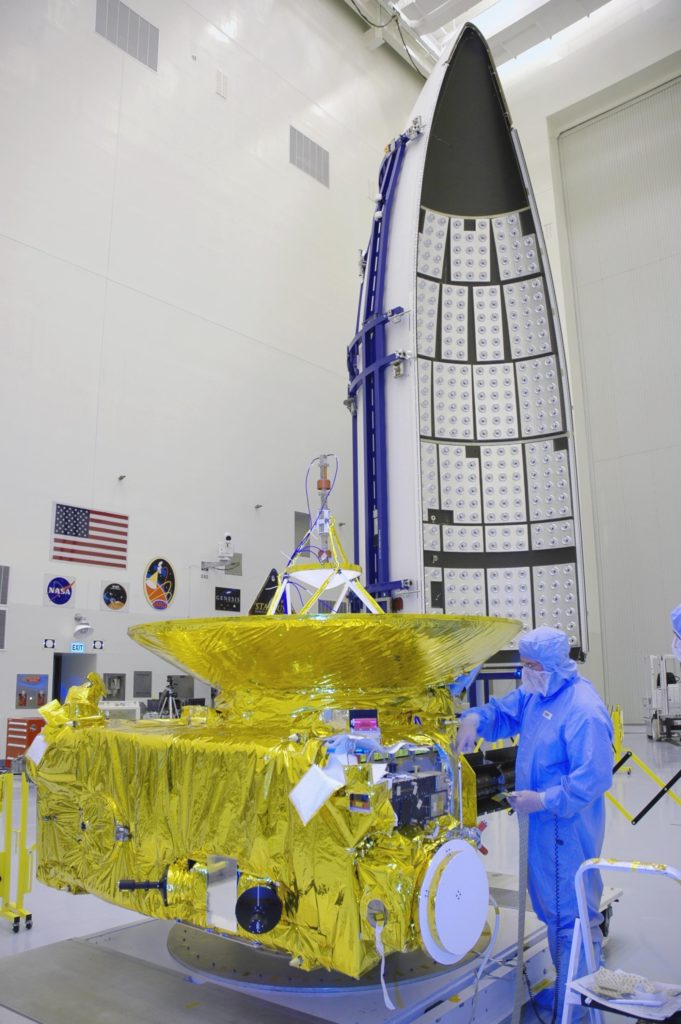 New Horizons in the clean room prior to launch in 2006. Photo provided by NASA

Pluto dwells in the Kuiper Belt, an outer region of the solar system filled with comets, asteroids and small bodies of rock. New Horizons had to avoid hitting these object as it zoomed through the belt at a speed of 10 miles per second. Colliding with something as small as a grain of rice could destroy the probe.

Unsure of what loomed in the darkness surrounding the dwarf planet, Stern wondered: What if Pluto “is really a black widow?”

To protect against the worst case scenario, Stern’s team had to create a “fail-safe” data transfer system, so New Horizons could send them data well before it reached Pluto, or encountered dangerous objects. This transmission would happen far enough from Pluto “that there was no significant possibility of lethal impact” that would hurt the probe, Grinspoon wrote.

So far, New Horizons has continued to avoid all of the chaos en route to the solar system’s Kuiper Belt to investigate a celestial object called Ultima Thule (pronounced “ultima thoo-lee”).

Navigating through this death trap wasn’t the only challenge. On July 14, 2015, after traveling for nine and a half years, New Horizons had no more than nine minutes to get the best, most centered photos of Pluto. On Earth terms, that’s like a flight traveling from Los Angeles to New York and landing within four milliseconds of its scheduled time.

On top of that, the probe had to get close enough to Pluto (within 7,800 miles) and be no more than 60 miles off course. “This was the equivalent of hitting a golf ball from L.A. to New York and landing it in a target the size of a soup can!” Stern and Grinspoon wrote.

Yes, there was a New Horizons’ wake-up song

Scientists woke up New Horizons on December 6, 2014, after a monthslong stint of hibernation, to prepare for the flyby. NASA has a long-standing tradition of playing a “wake-up song” when a mission reaches a new milestone. (Back in 1965, for instance, astronauts on Gemini 6 woke up to “Hello, Dolly!”)

For New Horizons, Stern chose the Star Trek: Enterprise theme “Faith of the Heart.” It was a perfect song for the arduous journey the New Horizons team endured, Stern and Grinspoon said, especially these lines: “It’s been a long road, getting from there to here. It’s been a long time, but my time is finally near … I can reach any star. I´ve got faith. I´ve got faith of the heart.”

Clyde Tombaugh’s ashes were affixed to the New Horizons probe. In 1930, he discovered Pluto. Now he has visited it. Photo provided by Alan Stern

This song wasn’t the only piece of sentiment accompanying the mission. New Horizons carried nine mementos, including the ashes of Clyde Tombaugh, who discovered Pluto in 1930, and a U.S. stamp from 1991 stating “Pluto: Not Yet Explored.” Each of these keepsakes symbolized the decades spent reaching for the little planet.

Left: In 2006, as NASA’s New Horizons probe zoomed toward Pluto, scientists demoted it to a dwarf planet. Upon arrival, the spacecraft discovered a world of wonders, with some features never before seen on other planets. We asked New Horizons mission leader Alan Stern, and planetary scientist David Grinspoon, authors of the new book —“Chasing New Horizons”—why this dwarf planet remains so worthy of our attention. Video by Rashmi Shivni