WATCH LIVE: SpaceX to launch Bangabandhu-1 satellite atop Block 5, the most powerful Falcon 9 rocket to date

Editor’s note: SpaceX’s launch of Bangabandhu-1 was scrubbed Thursday evening and postponed until Friday. Just after the Falcon 9 rocket entered startup mode, it threw an abort about two minutes before liftoff. The launch window will reopen Friday, May 11 at 4:14 p.m. ET. Watch live in the player above.

The solar-powered satellite will venture into geostationary orbit around Earth to offer radio, internet and worldwide television broadcasts to rural areas throughout the country for the first time.

But Block 5 — the souped-up SpaceX rocket carrying the satellite — may be the real headliner.

What is Block 5? The Block 5 is the most powerful (and ostensibly most recyclable) version of SpaceX’s Falcon 9, the private space company’s flagship rocket. Standing at more than 250 feet tall, the new rocket system is 40 percent bigger than the initial Falcon 9 launched back in 2010. 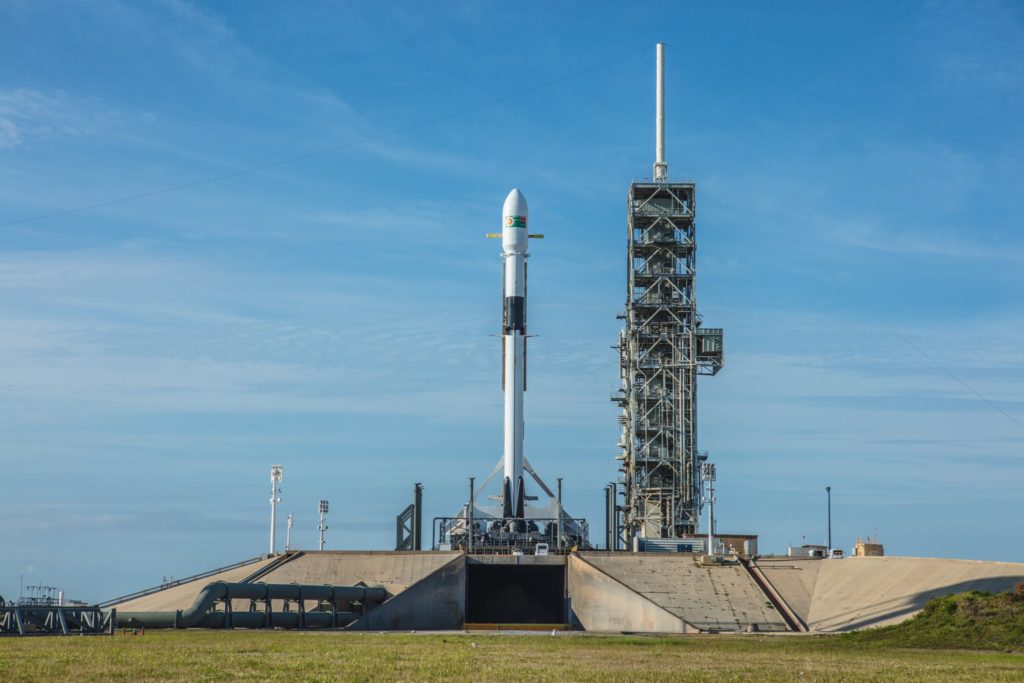 Bangabandhu Satellite-1 prepares for launch atop SpaceX’s Falcon 9 Block 5. rocket at NASA at Cape Canaveral in Florida. Photo by SpaceX

Elon Musk, the founder, CEO and lead designer of SpaceX, said the Block 5’s engines produce a thrust that is 7 to 8 percent stronger than the Falcon 9’s. This boost almost doubles the rocket’s potential payload to 50,000 pounds, according to Business Insider’s Dave Mosher. (Bangabandhu-1 weighs 7,700 pounds). The engines are also bolted — rather than welded — onto the boosters to reduce the time needed for inspections and repairs

The rocket’s first stage — the section that returns to Earth for reuse — is where most of the shielding improvements were made. The biggest switch involves the material used for the grid fins, which guides the first stage during its descent to the landing pad on the SpaceX droneship. Those fins are now made from titanium, rather than aluminum, which should prevent melting during reentry.

The first stage “gets so hot that it lights on fire a little bit, which is not great for reuse,” Musk said in March 2017. “The new grid fins should be capable of taking a scorching and being fine.”

The new first stage is covered in a thermal protective coating rather than ordinary white paint. SpaceX engineers have also included extra shielding at the base of the rocket to protect the booster’s propulsion systems as they reenter the atmosphere.

Why it matters: Previous incarnations of the Falcon 9 could be relaunched two times. Block 5’s design should allow for up to 10 relaunches — or up to 100 times if the rockets are refurbished. For Musk, rocket reusability is the key to SpaceX’s long-term ambition of colonizing Mars.

All of these changes aim to reduce the cost of launches, which Mosher estimates could drop by $20 million or more. Block 5 will also likely be the final upgrade to Falcon 9.

Left: Measuring at more than 250 feet, the latest (and potentially last) upgrade to SpaceX's Falcon 9 rocket -- the Block 5 -- is 40 percent bigger than the original version launched back in 2010.