Why Aedes aegypti are so good at transmitting Zika, and other FAQs

There are nearly 200 types of mosquitoes in the U.S., but only one of them has been making headlines for transmitting Zika virus more frequently than any of the others have so far.

The Aedes aegypti belongs to the Aedes family (which rhymes with “ladies,” one scientist pointed out). The mosquitoes have a reputation that precedes Zika: They arrived in the Americas aboard African slave ships and brought yellow fever virus with it, evoking the common name “yellow fever mosquito.”

It conquered wherever the environment was warm and wet, with females laying as many as 1,000 eggs in their short lifetimes, quickly spreading from northern Argentina to the American South. On top of yellow fever, Aedes ladies (males don’t bite) soon developed a reputation for being some of the most efficient at transmitting other flaviviruses such as dengue fever, West Nile and now Zika. The Aedes agypti has helped Zika explode through South America, up through Mexico and Puerto Rico and now into Florida, where at least six people have acquired it from a mosquito, according to the Centers for Disease Control and Prevention (CDC).

The virus’ symptoms are fairly elusive, but it poses a threat to pregnant women, because lab tests show it can attack fetal stem cells and cause birth defects like microcephaly, a disorder that stunts the development of its brain and prevents its head from growing. The CDC issued a travel advisory suggesting pregnant women stay away from Miami.

But why are the Aedes aegypti, of the thousands of species of mosquitoes in the world and 176 in the U.S., so good at transmitting Zika virus? PBS NewsHour Weekend talked to Sadie Ryan, a medical geographer at the University of Florida, and parsed the science to try answer that and other questions. 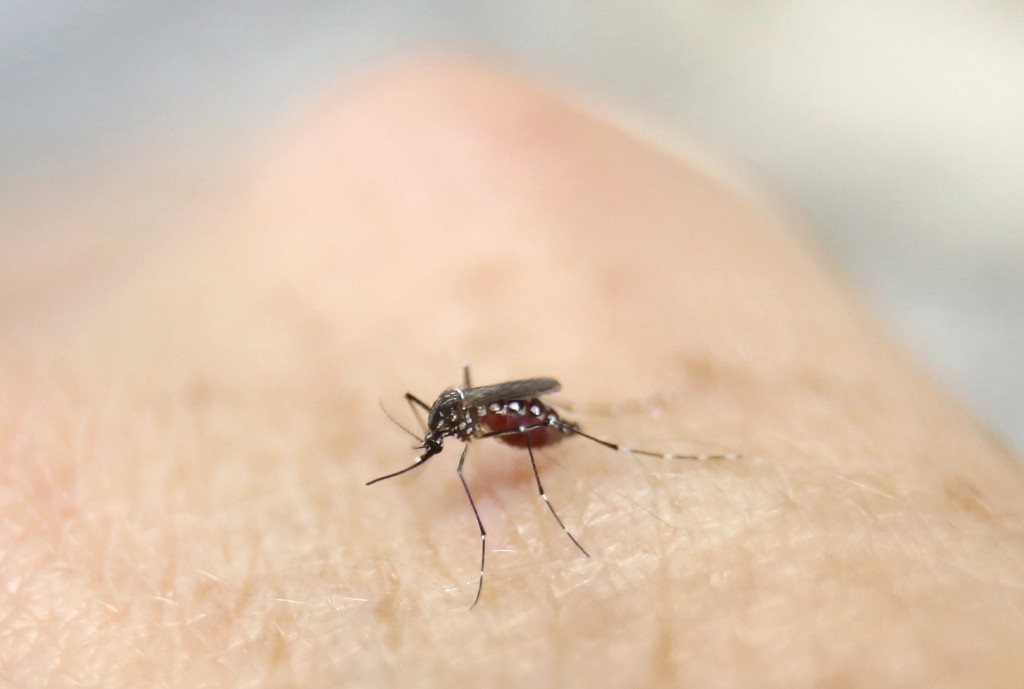 An Aedes aegypti mosquito is seen on human hand in a laboratory of the International Training and Medical Research Training Center (CIDEIM) in Cali, Colombia. These mosquitoes are a primary transporter of Zika virus in tropical regions. Photo by Jaime Saldarriaga/REUTERS

Why are Aedes aegypti so good at transmitting disease-causing flaviviruses such as Zika?

Many of the viruses they transmit are blood-borne and replicate well inside an Aedes aegypti’s stomach, in part because the mosquito prefers human blood, which has proven to increase the virus’ reproduction rate. It’s also a sneaky biter that attacks subtle places such as the ankles, and feeds several times before it is full, increasing the risk for transmission with every bite. Because it prefers humans, it lives near them and lays as many as 200 eggs per batch up to five times in a lifetime, often in man-made puddles of still water that can be as slight as a teaspoon.

How does an Aedes aegypti mosquito transmit Zika?

An Aedes aegypti has to feed off of something or someone who is infected to get the virus. While researchers are still studying Zika’s mechanisms, many flaviviruses such dengue have to break through the lining of the mosquito’s stomach and infiltrate the mosquito’s salivary glands. Then, the saliva can infect humans when it takes a bite.

Why do Aedes aegypti ladies feed off of humans?

Aedes ladies, like some disease-carrying ticks, are anthropophilic, which means they prefer human blood to all other animals. There are many insects that would rather eat animals that aren’t humans, which makes them zoophilic. But studies show that Aedes ladies’ diets are almost primarily humans, possibly because their blood increases the mosquito’s fitness and exponentially boosts the basic reproduction rate of viruses.

Where do the Aedes aegypti live in the U.S.?

Data from the CDC show that Aedes aegypti span across the lower third of the U.S. on the west but that they have gained more ground as they span to the east, reaching as far north as New York and Connecticut. They prefer warm, wet weather, so as the climate changes, they can cover more area.

Are there other mosquitoes in the Aedes family that can transmit Zika?

Yes. The Aedes albopictus, cousin to the aegypti and also known as the Asian tiger mosquito, arrived in Texas from Japan in the mid-1980s through commerce. It looks similar, and its geographical reach in the U.S. covers more area that the Aedes aegypti, extending further north in the northeast. But it’s seen as the inferior vector for Zika, at least in the U.S., because it doesn’t bite as much, it doesn’t always prefer humans, and it doesn’t always lay eggs near them. Regardless, there are so many other mosquitoes in the world, it’s unclear if the Aedes family is the only one that can transmit it. 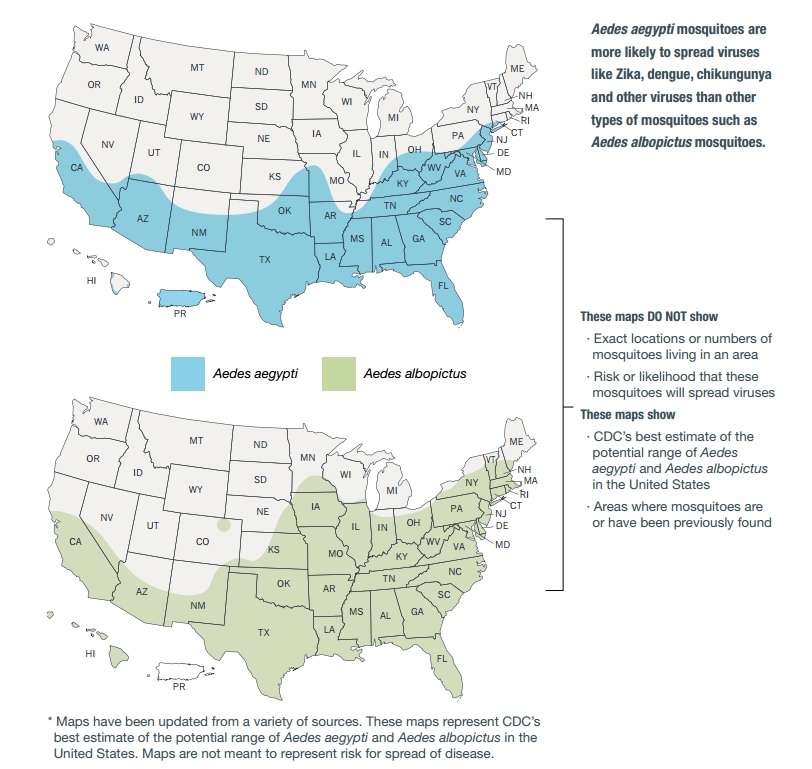 A comparison of where Aedes aegypti and Aedes albopictus live. Both can transmit Zika, but the Aedes aegypti is especially good at it in the U.S. Graphic by CDC

How can I tell if a mosquito in the Aedes family is biting me?

The most distinguishing trait about the Aedes ladies that have transmitted Zika so far (Aedes aegypti and Aedes albopictus) is their hind legs. If you can see that they are striped in black and white, then it is probably a mosquito that can carry and transmit flaviviruses such as Zika and dengue. But that means you’ll catch them mid-bite and “by then, it’s too late,” Ryan said.

What do they contribute to the ecosystem?

Ryan said that’s a tough question to answer mostly because they thrive in urban environments. Some mosquitoes can be helpful pollinators and food for other animals such as bats and birds. But they are an invasive species, and since their voyage to the U.S. on slave ships, they have been biting and infecting humans here. “We’ve been trying to do vector control for forever,” she said. Their place in the ecosystem is “very human-centric.”