Agriculture emits a ‘forgotten greenhouse gas.’ Scientists are looking for solutions in the soil

As nations and industries try to cut greenhouse gas emissions to tackle climate change, agricultural practices are in the spotlight. There’s good reason for that: Agriculture accounts for 16 to 27 percent of human-caused climate-warming emissions, according to the Intergovernmental Panel on Climate Change (IPCC). But much of these emissions are not from carbon dioxide, that familiar climate change villain. They’re from another gas altogether: nitrous oxide.

N2O, also known as laughing gas, does not get nearly the attention it deserves, says David Kanter, a nutrient pollution researcher at New York University and vice chair of the International Nitrogen Initiative, an organization focused on nitrogen pollution research and policy making. “It’s a forgotten greenhouse gas,” he says. Yet molecule for molecule, N 2O is about 300 times as potent as carbon dioxide at heating the atmosphere. And like CO 2, it is long-lived, spending  an average of 114 years in the sky before disintegrating. It also depletes the ozone layer. In all, the climate impact of laughing gas is no joke. IPCC scientists have estimated that nitrous oxide comprises roughly 6 percent of greenhouse gas emissions, and about three-quarters of those N 2O emissions come from agriculture.

But despite its important contribution to climate change, policy makers have not directly addressed N2O emissions. And the gas continues to accumulate. A 2020 review of nitrous oxide sources and sinks found that  emissions rose 30 percent in the last four decades and are exceeding all but the highest potential emissions scenarios described by the IPCC. Agricultural soil — especially because of the globe’s heavy use of synthetic nitrogen fertilizer — is the principal culprit.

Today, scientists are looking at an array of ways to treat the soil or adjust farming practices to cut back on N2O production.

“Anything that can be done to improve fertilizer use efficiency would be big,” says Michael Castellano, an agroecologist and soil scientist at Iowa State University.

Humanity has tipped the Earth’s nitrogen cycle out of balance. Before the rise of modern agriculture, most plant-available nitrogen on farms came from compost, manure and nitrogen-fixing microbes that take nitrogen gas (N2) and convert it to ammonium, a soluble nutrient that plants can take up through their roots. That all changed in the early 1900s with the debut of the  Haber-Bosch process that provided an industrial method to produce massive amounts of ammonia fertilizer.

In these plots of corn at Iowa State University, researchers are testing a microbe-based fertilizer that is intended to supply the plants with enough nitrogen to keep yields high with much less nitrous oxide production. Photo courtesy of Pivot Bio

This abundance of synthetic fertilizer has boosted crop yields and helped to feed people around the globe, but this surplus nitrate and ammonium comes with environmental costs. Producing ammonia fertilizer accounts for about 1 percent of all global energy use and 1.4 percent of CO 2 emissions (the process requires heating nitrogen gas and subjecting it to pressures of up to 400 atmospheres, so it’s very energy-intensive). More importantly, the fertilizer drives increased emissions of nitrous oxide because farmers tend to apply the nitrogen to their fields in a few large batches during the year, and crops can’t use it all.

When plant roots don’t mop up that fertilizer, some of it runs off the field and pollutes waterways. What remains is consumed by a succession of soil microbes that convert the ammonia to nitrite, then nitrate and, finally, back to N2 gas. N 2O  is made as a by-product at a couple of points during this process.

Carefully dispensing fertilizer right when plants need it or finding ways to maintain yields with reduced nitrogen fertilizer would reduce these N2O emissions, and scientists are looking at various ways to do that. One strategy under investigation is to harness precision agriculture techniques that use remote sensing technology to determine where and when to add nitrogen to fields, and how much. Another is to use nitrification inhibitors, chemicals that suppress the ability of microbes to turn ammonia into nitrate, impeding the creation of N 2O and keeping the nitrogen in the soil for plants to use over a longer span of time.

Widely adopting these two practices would reduce nitrous oxide emissions about 26 percent from their current trajectory by 2030, according to a 2018 estimate by researchers at the International Institute for Applied Systems Analysis in Austria. But the authors say it will take more than that to help meet greenhouse gas targets such as those set forth in the Paris climate agreement. So scientists are exploring additional strategies.

One potential method involves harnessing the potential of certain microbes to directly supply nitrogen to plants, much as nitrogen-fixing bacteria already do in partnership with beans, peanuts and other legumes. “There’s really a gold mine living in the soil,” says Isai Salas-González, coauthor of an article on the plant microbiome in the 2020  Annual Review of Microbiology and a computational biologist who recently completed a PhD at the University of North Carolina at Chapel Hill. 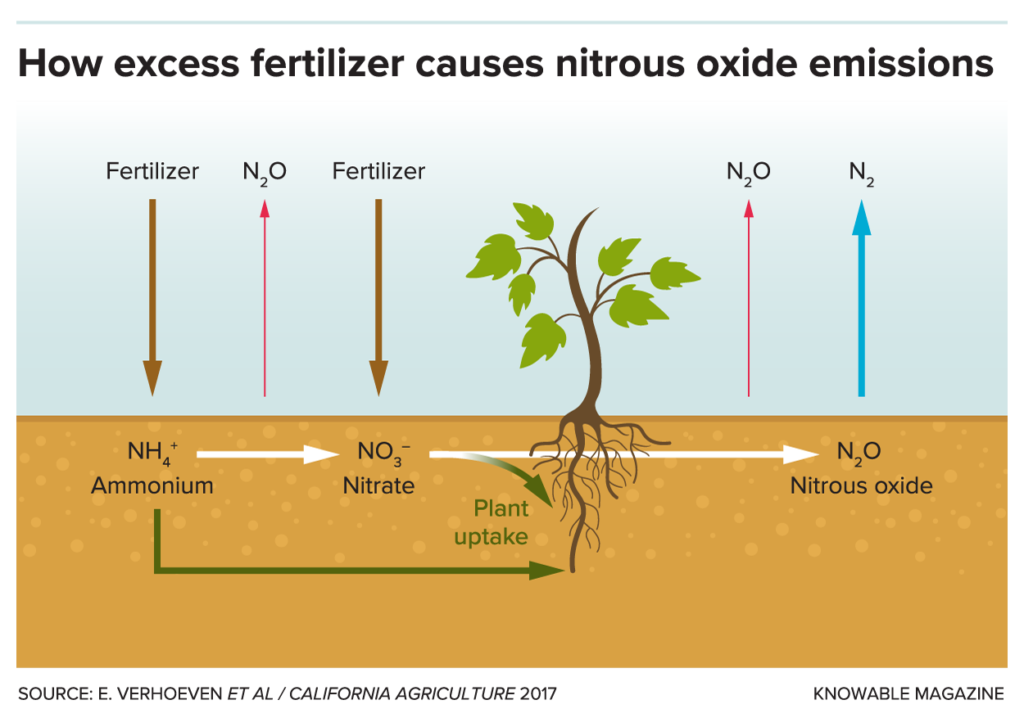 Excess fertilizer leads to pollution, including nitrous oxide formation. Fertilizers can be ammonium- or nitrate-based. When plant roots don’t take up all the nutrients, they undergo a series of microbe-mediated transformations. Ultimately, the nitrogen re-enters the atmosphere as nitrogen gas (N2) and — in smaller part — as N2O, a potent greenhouse gas.

In that vein, since 2019 the company Pivot Bio has marketed a microbial product called Pivot Bio Proven that, they say, forms a symbiosis with crops’ roots after an inoculant is poured in the furrows where corn seeds are planted. (The company plans to release similar products for sorghum, wheat, barley and rice.) The microbes spoon-feed nitrogen a little at a time in exchange for sugars leaked by the plant, reducing the need for synthetic fertilizer, says Karsten Temme, CEO of Pivot Bio.

Temme says that company scientists created the inoculant by isolating a strain of the bacterium Kosakonia sacchari that already had nitrogen-fixing capabilities in its genome, although the genes in question were not naturally active under field conditions. Using gene editing technology, the scientists were able to reactivate a set of 18 genes so  that the enzyme nitrogenase is made even in the presence of synthetic fertilizer. “We coax them to start making this enzyme,” Temme says.

Steven Hall, a biogeochemist at Iowa State University, is now testing the product in large, dumpster-sized containers with corn growing in them. Researchers apply the inoculant, along with different amounts of synthetic fertilizer, to the soil and measure corn yields, nitrous oxide production and how much nitrate leaches from the base of the containers. Though results of the trial are not yet out, Hall says there’s “good initial support” for the hypothesis that the microbes reduce the need for fertilizer, thereby reducing nitrous oxide emissions.

But some soil scientists and microbiologists are skeptical of a quick microbial fix. “Biofertilizers” like these have had mixed success, depending on the soil and environment in which they are applied, says Tolu Mafa-Attoye, an environmental microbiology graduate student at the University of Guelph in Canada. In one field study of wheat, for example, inoculating the crops with beneficial microbes enhanced growth of the plants but only resulted in slightly greater yields. Unknowns abound, Mafa-Attoye’s Guelph colleagues wrote in February in  Frontiers in Sustainable Food Systems — such as whether the microbes will negatively affect the soil ecology or be outcompeted by native microbes.

Instead of adding in a microbe, it may make more sense to encourage the growth of desirable microbes that already exist in the soil, says Caroline Orr, a microbiologist at Teesside University in the UK. She has found that cutting back on pesticide use led to a more diverse microbial community and a greater amount of natural nitrogen fixation. In addition, production of nitrous oxide is influenced by the availability of carbon, oxygen and nitrogen — and all are affected by adjusting fertilizer use, irrigation and plowing. 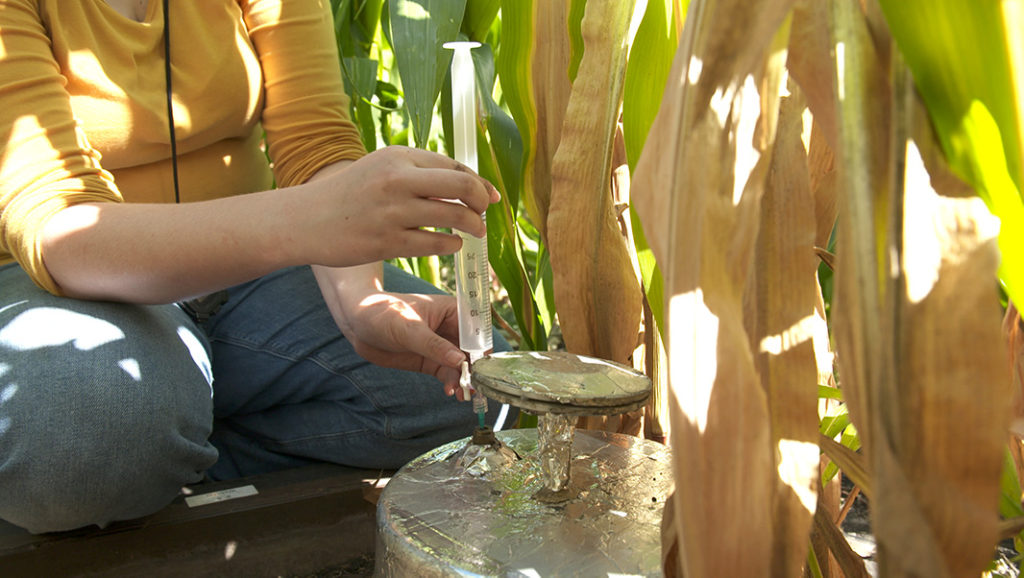 A researcher at work in a field at Iowa State. To measure nitrous oxide release, scientists use chambers to concentrate soil emissions and then extract samples from them. Photo courtesy of Pivot Bio

Take tillage, for example. An analysis of more than 200 studies found that nitrous oxide emissions increased in the first 10 years after farmers stopped or cut back on plowing their land. But after that, emissions fell. Johan Six, a coauthor of the analysis and an agroecologist at ETH Zürich in Switzerland, thinks that’s because the soils start out in a heavily compacted state after years of equipment driving over them. Over time, though, the undisturbed soil forms a cookie-crumb-like structure that allows more air to flow in. And in high oxygen environments, microbes produce less nitrous oxide. Such no-till systems also result in more carbon storage because less plowing means reduced conversion of organic carbon to CO 2 — providing an additional climate benefit.

It may even be possible for farmers to save money on fertilizer and water and reduce emissions, all while maintaining yields. In research on tomato farms in California’s Central Valley, Six found that study plots with reduced tillage and a drip irrigation system that slowly oozed nitrogen to plants — reducing how much of the nutrient pooled in the soil — lowered N2O emissions by 70 percent compared with conventionally managed plots. The farmer who implemented those changes was also compensated for his greenhouse gas reduction through the state’s cap-and-trade program. With the right incentives, persuading farmers to cut their emissions might not be that hard, says Six.

In Missouri, farmer Andrew McCrea grows 2,000 acres of corn and soy in a no-till system. This year, he plans to trim back his fertilizer use and see if the Pivot Bio inoculant can keep his yields more or less the same. “I think all farmers certainly care about the soil,” he says. “If we can cut costs, that’s great too.”

And if policy makers turn to tackling nitrous oxide, there should be rippling benefits for all of us, says Kanter of New York University. Some of them could be more rapid and tangible than addressing climate change. The same measures that lower N2O levels also reduce local air and water pollution as well as biodiversity losses. “Those are things that people will see and feel immediately,” Kanter says, “within years as opposed to within decades or centuries.”

This article originally appeared in Knowable Magazine, an independent journalistic endeavor from Annual Reviews. Sign up for the newsletter.

Left: The sun lights a corn field waiting to be harvested near Akron, Iowa, U.S., October 28, 2017. Photo by Lucas Jackson/Reuters

Ula Chrobak is a freelance science journalist based in Reno, Nevada.