Airplane Turbulence: Is It Dangerous? 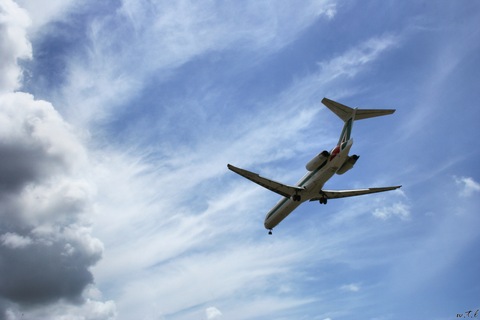 No frequent flyer is a stranger to turbulence. But what causes it, and how dangerous is it?

Turbulence is the random, chaotic motion of air, caused by changes in air currents. From inside an airplane, it can range from minor bumpiness that can jostle the cranberry juice on your tray to powerful jolts that can structurally damage the plane and injure its passengers. Each year, pilots report about 65,000 accounts of moderate or greater turbulence and 5,500 accounts of severe turbulence. Turbulence is responsible for roughly 75 percent of all weather-related accidents and incidents, according to the National Transportation Safety Board.

But modern planes are hardy, and built to withstand even severe turbulence. Turbulence extreme enough to damage a commercial airplane is extremely rare, and pilots have ways of both handling and avoiding it.

“Aircraft reaction to turbulence varies with the difference in windspeed in adjacent currents, size of aircraft, wing loading, airspeed, and aircraft altitude, according to a text on aviation weather, published by the FAA. “When an aircraft travels rapidly from one current to another, it undergoes abrupt changes in acceleration.”

Most turbulence is weather related, said Alan Yurman, a retired air safety investigator with the National Transportation Safety Board and an aviation consultant. Yurman said you can understand turbulence by visualizing a boat. As the boat goes through water, it causes ripples, waves and eddies. Air is the same way. Air currents, weather patterns and even other planes can make the air rough and bumpy.

Pilots are taught to slow down when they encounter turbulence. “What you don’t want to do is fight the turbulence,” Yurman said. “If turbulence is causing you to go up, you don’t want to push down hard on the controls, you want to try to slow down and ride it out to the other side. You don’t make any sudden control moves, because that could cause you to overstress the airplane.”

Here are some of the different kinds of turbulence that planes encounter:

Clear-air turbulence, known in the industry as CAT, is common at high altitudes but hard to predict since it’s invisible to weather radar, which can only see inside of clouds. It’s usually caused by shifting jet streams.

Jet streams are fast rivers of air. Below and above these rivers are wind shears, or rapid changes in wind speed. Where there’s a jet stream, there’s shear, and where there’s shear there’s turbulence, said Bob Sharman, a project scientist at the National Center for Atmospheric Research. “The worst turbulence isn’t right at the heart of the jet stream, it’s at the sides of the jet stream. That’s where the shear is largest, and the shear kind of rips apart the air and causes turbulence.”

USA Today’s John Cox, a retired airline captain with U.S. Airways and a consultant, talks about it here. Today’s modern planes are very capable of handling this kind of turbulence, he says.

While wind shears in the upper atmosphere are usually vertical, they tend to be horizontal closer to the runway. Horizontal wind shears can create eddies or swirls, of air that cause turbulence. A microburst is a type of wind shear associated with a thunderstorm and caused by a current of sinking air. The problem with microbursts is that they often occur as an airplane is departing or landing, creating little room for error, said Corey Ferguson, a Boeing 777 captain and a consultant for Aviation Experts.

“At altitude, if you were to lose 1,000 feet, no problem,” Ferguson said. “There are no mountains up there. But if at 500 feet, you lose 1,000 feet of altitude, you’d be 500 feet underground. The bottom line is you don’t have the potential energy or safety of additional room above the ground. There’s less room for error and recovery from a wind shear encounter.”

For this reason, a warning about a wind shear during descent could prompt a pilot to climb away from the airport rather than land. “Go arounds” such as this occur about once every 300 to 500 landings, Ferguson added.

Wind blowing across a mountain pass can take on the form of a wave as it comes in contact with the mountain, forcing air over it and setting it in oscillation. These atmospheric waves may become turbulent, like a breaking ocean wave. The waves can extend 100 miles or more downwind from the mountain and well above even the highest peaks, sometimes into the lower stratosphere. Turbulence in a mountain wave can range from very mild to violent enough to damage an airplane.

It’s common to encounter this kind of turbulence while flying over the Rocky Mountains, the Sierra Nevada or Wasatch mountain range. Mountain wave turbulence is also common over Greenland, often encountered en route from Europe to the United States.

“Some of the worst turbulence we see is associated with breaking mountain waves,” Sharman said. “Even if the wave is not breaking, it can cause an airplane to go up and down more than a pilot would like, and that can be dangerous.” Planes can rise or plummet as far as 1,000 feet, he said, which could land them at the flight level of another aircraft.

Like clear-air turbulence, this kind often has no visual indicator, and it’s highly transient as it moves around, making reports by other pilots unreliable.

In 1992, a package carrier struck a mountain wave while flying over Evergreen, Colo. The wave was so violent, it ripped off part of the plane’s wing and outboard engine. Still, the pilot managed to land safely in Denver.

But that was very unusual. Aviation experts said that only in extremely rare events have mountain waves caused crashes. “I don’t know of any commercial airliner that’s gone down because of one,” Sharman said.

Planes themselves can also cause turbulence. Just like a ski boat creates eddies and waves in the water, rapidly spinning air currents can develop off the wing tips of an aircraft. These vortices can cause a following plane to roll. Such air currents decay fairly rapidly, so if planes are far enough apart, it’s not a problem.

“It’s encountered normally when on approach to an airport with closely-spaced runways, Ferguson said.

Convective currents, most active on warm summer afternoons, are a common cause of turbulence at low altitudes and can impact planes during take-off or landing. Air that is heated near the ground rises, but since different surfaces have a hotter surface area than others — think sandy wasteland or plowed fields versus cooler forest or water — the air heats unevenly, causing different hot spots and abrupt changes in airspeed that can be dangerous at low altitudes.

This can be a problem in a place like Phoenix that has a lot of surface area heating during the day.

Thunderstorms can also create severe turbulence that pilots are taught to avoid. “It can be very violent, going up and down,” Yurman said. “You can have currents going up in some places and coming down suddenly — vertical, shearing-type currents. These are really dangerous. They’ve torn planes apart.”

While turbulence can occur inside thunderstorms, it can also occur in the clear air around the storm. This is called convectively-induced turbulence.

Fortunately, there are many warning systems for pilots. Ground radar, airplane radar and pilot reports will all alert a pilot to thunderstorms.

Thunderstorms create turbulence by pulling large amounts of air in and sending it upwards very rapidly. Once this air cools, it has to come down, as it is heavier than the surrounding air. When it does, it can create microburst and very turbulent conditions. Pilots avoid thunderstorms by using weather radar which shows the precipitation within the storm. Newer generation radar can also show areas of turbulence. Each airline has specific guidance to pilots on minimum distances from storms.

Turbulence is disturbing because you can’t control it, you can only maneuver around it, Ferguson said, but stresses that damage to a plane from turbulence is extremely rare.

“Sometimes, from point A to point B, turbulence is everywhere,” he said. “We know we’re going to get through it, and it’s not going to be a fun ride today. But at altitude we’ve had a very very small number of problems as a result of turbulence.”

More often, airplane injuries are a result of people getting banged around the cabin, a problem with a simple solution, Sharman said: “If people can just keep their seatbelts fastened all the time, it would cut down on the number of incidents.”