Americans predict what the future looks like for technology

Over the past 50 years, Americans have witnessed the first man walk on the moon, the birth of the Internet and cellphones, large and small and large again. What will the future of technology and science hold in the next 50 years? Controlled weather? Space colonization? Personal drone use?

Pew Research Center recently asked the American public about their predictions and hopes for the future of technology. The “U.S. Views of Technology and the Future” report, released Thursday, found that a majority of the more than 1,000 Americans surveyed believe that the next five decades will see the custom creation of transplantable organs, and computer-developed art, music and novels rivaling human talent. And while most don’t believe the United States will see teleportation, space colonization or controlled weather, more people found those first two ideas more likely scenarios than the ability to choose which way the wind blows. 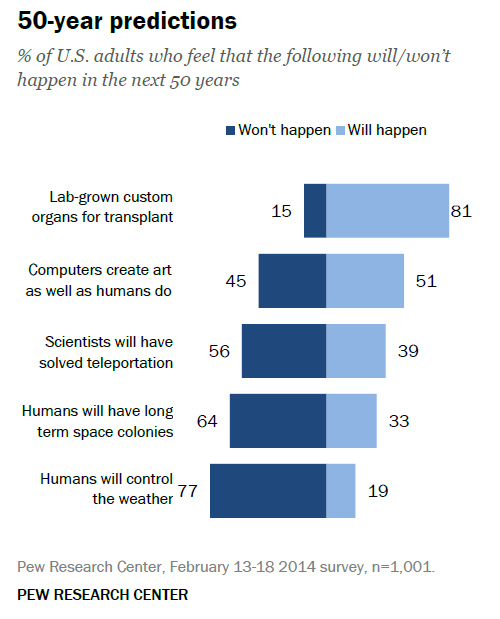 Most Americans don’t think humans will be able to control the weather in the 50-year future.

“Clearly nature holds a place in the popular imagination that even some of the most challenging engineering projects can’t match,” said senior researcher of Pew Research Center’s Internet Project Aaron Smith.

When it comes to short-term changes regarding some controversial technological advancements, the majority is wary:

Pew notes it’s not that everyone is completely opposed to trying new technology. They’re just “inclined to let others take the first step.”

Getting brain implants to improve memory or eating lab-grown meat, on the other hand, might not have many takers at all. Just twenty-six percent would (literally) change their minds, and only 20 percent were willing to try Franken-meat. But the opinion was nearly split on riding driverless cars, with 48 percent up for the challenge and 50 percent uninterested.

We’re asking: What technological advancements are you looking forward to in the future? Tell us in the comments below.