In the beginning of the 13th century, Genghis Khan conquered much of Asia and Eastern Europe, forming the largest contiguous land empire the world has ever known, spanning modern China, Korea, Russia, India, much of Eastern Europe, the Middle East and Southeast Asia. He united warring tribes and became the great khan of the Mongol Empire — and nice weather might have helped him succeed.

In a new study published in the Proceedings of the National Academy of Sciences, American climate researchers, who studied the rings of ancient trees in central Mongolia, say Genghis Khan’s rise to power coincided with a bout of mild, wet weather. It turns out nice weather is great for empire building.

“When Genghis Khan was coming to power, Mongol tribes were fighting amongst each other. This coincidentally is a time of one of the worst droughts we see on record for the last 1,100 years,” explained Neil Pederson, a tree-ring scientist at Columbia University’s Lamont-Doherty Earth Observatory. He has spent the last two decades studying climate in Mongolia.

“Then as he is emerging and uniting the tribes, the weather turns positive.” 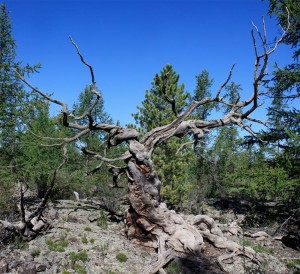 An ancient Siberian pine in Khorgo lava field in central Mongolia was discovered in 2010. This long dead tree is similar to those researchers used to dissect a millennium’s worth of tree-ring records. Image courtesy of Neil Pederson.

Pederson and co-author Amy Hessel of West Virginia University found a group of ancient Siberian pine trees in central Mongolian lava fields, containing centuries of climate history tucked away in growth patterns. The scientists read the climate data like a history book, dating back over 1,100 years, and noticed a growth spurt in local fauna exactly at the time when Genghis Khan’s 13th century empire began.

“A period of abundant moisture should translate into above average grass (productivity). When the trees are growing well, the grasslands are growing well, and that is translated into energy. You feel it all the way up the food chain,” Pederson said.

Nichola Di Cosmo, a professor of East Asian Studies at the Institute for Advanced Study, says that there are not many sources contemporary to Genghis Khan for historians to look back on. “The Secret History of the Mongols,” is a 13th century text written in Mongolian, probably based on the oral traditions passed down about the rise of Genghis Khan. It influences much of what we assume to be true about the conqueror and his armies. The climate data gave Di Cosmo new insight. 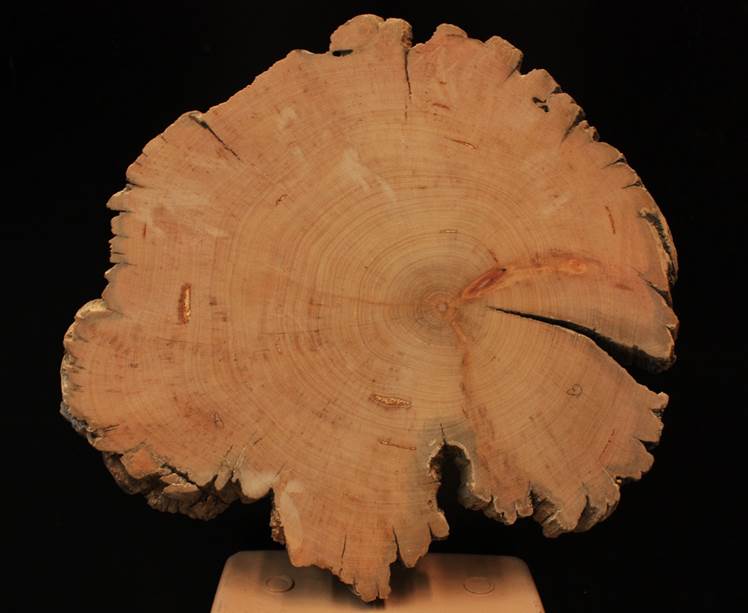 The first cross-section of Siberian pine from the Khorgo lava field that dated into and through the Mongol Empire of the 13th century. Photo by Neil Pederson

“There’s quite a lot of research on correlations between climatic downturns and competition over resources,” Di Cosmo said. “So it looks like the situation in the end of the 12th century is pretty dire in Mongolia. At some point a new political order emerges. This happens when the climate is very favorable, strengthening the command structure created by Genghis Khan.”

Genghis Khan’s military was dependent on horses and livestock. The rains and mild temperatures would have encouraged grass growth.

“Every warrior needed horses and a steady supply of military mounds, and obviously if the grassland is more productive it allows for more horses to graze and reproduce,” Di Cosmo said.

The natural abundance allowed the army to rebound quickly, centralize power and go on to conquer.

It wasn’t all weather though.

“He was an exceptional leader, and we need to make sure people understand that,” said Pederson, “Just because the climate changed in a positive way, it doesn’t mean that if there was a different leader that this would have happened.”

Left: New research suggests that one of the greatest conquerors in all of history, may have been given an advantage by Mother Nature. Photo by Ludovic Hirlimann/Flickr