There’s a 363-foot rocket ready to launch in the middle of Washington, D.C.

The life-sized animation of NASA’s Saturn V will loom above the National Mall every night this week, projected onto the Washington Monument. The after-dark light show is a gigantic tribute from the Smithsonian’s National Air and Space Museum to honor the 50th anniversary of the Apollo 11 mission that put two astronauts on the moon.

“Nothing like this had ever been done before,” said executive producer Nick Partridge of the projection.

To pull off the feat, he and co-executive producer Katie Moyer needed special permission from the U.S. Congress, buy-in from the White House, and collaboration with the Department of the Interior. Partridge and Moyer partnered with the design studio 59 Productions, best known for their work at the London Summer Olympics opening ceremony in 2012.

What if a real rocket took off from the Washington Monument?

The Saturn V rocket generated 7.6 million pounds of thrust at launch, rattling the ground beneath it as it created more power than 85 Hoover Dams working at peak capacity.

Big rockets like the Saturn V could wreck buildings with the force of the sound they emitted. For a smaller rocket, the Saturn C-1, NASA estimated that the sound it made would be physically painful to human ears almost two miles away.

The steps of the Capitol are about 1.2 miles from the Washington Monument, and the White House is considerably closer than that. A full Saturn V launch would likely shatter windows and damage eardrums across the National Mall and beyond!

Dozens of designers and technicians worked several late nights and early mornings to set up a bank of 24 carefully calibrated projectors in the days before the rocket was first revealed to the public on July 16.

“I’m personally being sustained by a really precise balance of coffee, sugar and adrenaline,” Partridge said via phone call on Wednesday afternoon.

Workers also erected two large screens and a 40-foot countdown clock that mimics the original at the Kennedy Space Center. According to Partridge, the setup is “not quite as complicated as an actual launch pad, but it’s actually its own kind of technical marvel.”

Onlookers agreed that the spectacle was impressive.

“It’s super amazing,” said Adriana Desa, 10, who was among an estimated 4,000 viewers on Tuesday night. She took in the spectacle with her family, who were visiting from Florida.

“Hopefully people will look at it and be inspired to go back to the moon,” said Aaron Levis, 23, of Arlington, Virginia. Levis, who works as an aerospace engineer for Northrop Grumman Innovation Systems, continued, “It’s human nature to explore, and it’s valuable to do — you don’t see borders when you’re millions of miles away.”

That sense of inspirational unity wasn’t an accident.

“The moon landing was one of history’s greatest adventures,” Partridge said. Combining an icon of that event with another from American history “creates this really powerful visual to symbolize and emphasize the position of the moon landing in American identity.” 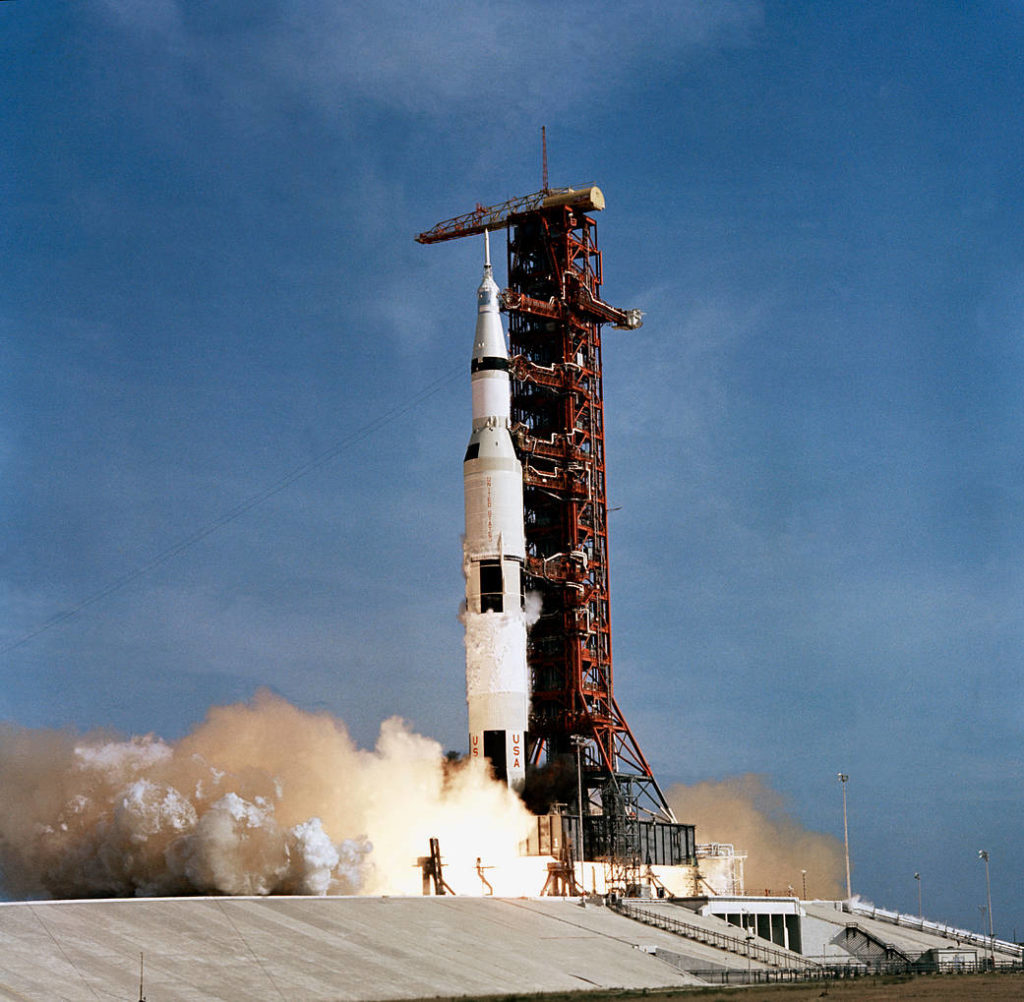 The Saturn V rocket that carried astronauts to the moon in 1969 is still the most powerful rocket to ever have launched. Image courtesy of NASA

Another onlooker saw even more symbolism in the display.

“If you look at where we are right now,” said Cody Collins, 31, of Falls Church, VA, “we’re between the Holocaust Museum and the Black History Museum,” referring to the United States Holocaust Memorial Museum and the National Museum of African American History and Culture. “This shows the worst of what we as people can do, and the best too.”

Left: The 555-foot-tall Washington Monument makes a perfect canvas for a 363-foot rocket and launch platform. Image by Vicky Stein