Birds Tumbling From the Sky; Fish Floating Dead in the Water: How Unusual Are These Animal Die-Offs? 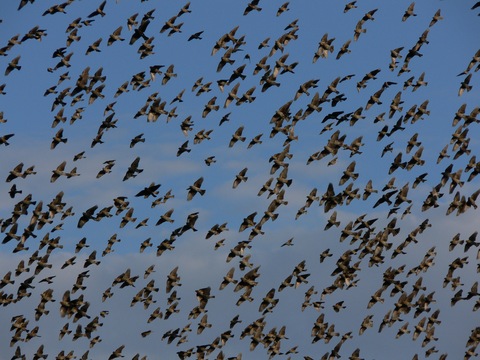 On New Years Day, residents of Beebe, Ark., awoke to find some 5,000 dead blackbirds strewn across roads, lawns and rooftops. Three days later, 125 miles from Beebe, thousands of fish were found dead on riverbanks and floating along the Arkansas River. And Tuesday, the bodies of 500 redwing blackbirds, European starlings and cowbirds were found along a stretch of highway near Baton Rouge, La., after plummeting to their death.

All three mass die-offs are a mystery, but despite the proximity, they don’t appear to be linked, scientists say.

So how unusual are these events?

“We just think it’s a rather strange coincidence,” she said.

The most likely explanation for what caused the birds to plunge from the Arkansas sky is sudden trauma. Roosting birds probably panicked at the sound of holiday fireworks, flew into a frenzy and then crashed into each other at high speeds, scientists say. White said the Louisiana birds probably flew into a power line.

“Blackbirds will naturally, at this time of year, spend the night in large roosts, in thousands,” said Doug Inkley, senior scientist at the National Wildlife Federation. “If they are frightened, which easily could be the case with fireworks, they could panic.” And birds colliding at 40 miles per hour could easily kill each other.

The fish kill may be even more mysterious. Frank Leone, a fisheries management biologist at the Arkansas Game and Fish Commission arrived at the bank of the Arkansas River after dark on Dec 29 to find nearly 2,000 freshwater drum fish washed up on a small stretch of sand and rocks. The next morning, on the main river channel, they found scores of fish floating dead in the main river channel.

“I knew then that it was a bigger kill than what we’d thought the night before,” Leone said.

Scientists estimate that about 83,000 fish died along a 17-mile stretch of the Arkansas River, a kill bigger than any Leone has seen in his 10 years as a local biologist. Chris Racey, the commission’s assistant chief of fisheries, also characterized the magnitude of the die-off as fairly rare.

But Inkley says that fish kills are more common than many realize and often human-caused.

Common culprits include toxic chemicals released into rivers and overfertilization, usually from farm runoff, he says. Both can cause oxygen depletion and dead zones in rivers and oceans. But such pollution would impact more than one fish, and in this case, 99 percent of the fish found dead were drum fish, with an occasional yellow bass, white bass and sauger fish affected.

Samples have been sent to the lab for analysis, and while results from the necropsies won’t be complete for another three weeks, disease is considered a top contender. “Many diseases are host-specific, so it’s a reasonable speculation on the part of the agencies,” Inkley says.

Drum fish are bottom feeders; they feed on mollusks, mussels and aquatic insects. The average adult size ranges from 12 to 20 inches, and while most weigh in at about 33 pounds, they’ve been known to get much bigger. A 45-pounder was caught once in 2004.

“We’re running a gamut of tests on the fish,” Racey said. “I think the diagnostics we’re conducting will help point us in a direction that may give us more answers as to why this occurred.”