How a brain gets hooked on opioids

Pain and pleasure rank among nature’s strongest motivators, but when mixed, the two can become irresistible. This is how opioids brew a potent and deadly addiction in the brain.

Societies have coveted the euphoria and pain relief provided by opioids since Ancient Sumerians referred to opium poppies as the “joy plant” circa 3400 B.C. But the repercussions of using the drugs were ever present, too. For centuries, Chinese patients swallowed opium cocktails before major surgeries, but by 1500, they described the recreational use of opium pipes as subversive. The Chinese emperor Yung Cheng eventually restricted the use of opium for medical purposes in 1729.

Less than 100 years later, a German chemist purified morphine from poppies, creating the go-to pain reliever for anxiety and respiratory conditions. But the Civil War and its many wounds spawned mass addiction to the drugs, a syndrome dubbed Soldier’s Disease. A cough syrup was concocted in the late 1800s — called heroin — to remedy these morphine addictions.

Today, prescription and synthetic opioids crowd America’s medicine cabinets and streets, driving a modern crisis that may kill half a million people over the next decade. Image by Lead Pipe Productions Pty Ltd

Doctors thought the syrup would be “non-addictive.” Instead, it turned into a low-cost habit that spread internationally. More than 70 percent of the world’s opium — 3,410 tons — goes to heroin production, a number that has more than doubled since 1985. Approximately 17 million people around the globe used heroin, opium or morphine in 2016.

Today, prescription and synthetic opioids crowd America’s medicine cabinets and streets, driving a modern crisis that may kill half a million people over the next decade. Opioids claimed 53,000 lives in the U.S. last year, according to preliminary estimates from the Centers for Disease Control and Prevention — more than those killed in motor vehicle accidents.

How did we arrive here? Here’s a look at why our brains get hooked on opioids.

Let’s start with the two types of pain. They go by different names depending on which scientist you ask. Peripheral versus central pain. Nociceptive versus neuropathic pain.

The distinction is the sensation of actual damage to your body versus your mind’s perception of this injury.

Your body quiets your pain nerves through the production of natural opioids called endorphins.

Stuff that damages your skin and muscles — pin pricks and stove burns — is considered peripheral/nociceptive pain.

Pain fibers sense these injuries and pass the signal onto nerve cells — or neurons — in your spine and brain, the duo that makes up your central nervous system.

In a normal situation, your pain fibers work in concert with your central nervous system. Someone punches you, and your brain thinks “ow” and tells your body how to react. Stress-relieving hormones get released. Your immune system counteracts the inflammation in your wounded arm.

Your body quiets your pain nerves through the production of natural opioids called endorphins. The trouble is when these pain pathways become overloaded or uncoupled.

One receptor to rule them all

Say you have chronic back pain. Your muscles are inflamed, constantly beaming pain signals to your brain. Your natural endorphins aren’t enough and your back won’t let up, so your doctor prescribes an opioid painkiller like oxycodone.

Prescription opioids and natural endorphins both land on tiny docking stations — called receptors — at the ends of your nerves. Most receptors catch chemical messengers — called neurotransmitters — to activate your nerve cells, triggering electric pulses that carry the signal forward.

Opioids and their receptors are inhibitory. Rather than spark electric pulses in our nerves, opioids dampen them. Image by Adam Sarraf

But opioid receptors do the opposite. They stop electric pulses from traveling through your nerve cells in the first place. To do this, opioids bind to three major receptors, called Mu, Kappa and Delta. But the Mu receptor is the one that really sets everything in motion.

The Mu-opiate receptor is responsible for the major effects of all opiates, whether it’s heroin, prescription pills like oxycodone or synthetic opioids like fentanyl.

The Mu-opiate receptor is responsible for the major effects of all opiates, whether it’s heroin, prescription pills like oxycodone or synthetic opioids like fentanyl, said Chris Evans, director of Brain Research Institute at UCLA. “The depression, the analgesia [pain numbing], the constipation and the euphoria — if you take away the Mu-opioid receptor, and you give morphine, then you don’t have any of those effects,” Evans said.

Opioids receptors trigger such widespread effects because they govern more than just pain pathways. When opioid drugs infiltrate a part of the brain stem called the locus ceruleus, their receptors slow respiration, cause constipation, lower blood pressure and decrease alertness.

Addiction begins in the midbrain, where opioids receptors switch off a batch of nerve cells called GABAergic neurons.

GABAergic neurons are themselves an off-switch for the brain’s euphoria and pleasure networks.

When it comes to addiction, opioids are an off-switch for an off-switch. Opioids hold back GABAergic neurons, which in turn keep dopamine from flooding a brain’s pleasure circuits. Image by Adam Sarraf

Once opioids shut off GABAergic neurons, the pleasure circuits fill with another neurotransmitter called dopamine. At one stop on this pleasure highway — the nucleus accumbens — dopamine triggers a surge of happiness. When the dopamine rolls into amygdala, the brain’s fear center, it relieves anxiety and stress. Both of these events reinforce the idea that opioids are rewarding.

These areas of the brain are constantly communicating with decision-making hubs in the prefrontal cortex, which make value judgments about good and bad. When it hears “This pill feels good. Let’s do more,” the mind begins to develop habits and cravings.

Taking the drug soon becomes second nature or habitual, Evans said, much like when your mind zones out while driving home from work. The decision to seek out the drugs, rather than participate in other life activities, becomes automatic.

The opioid pendulum: When feeling good starts to feel bad

It is the surge of withdrawal from opioids that makes the drugs so inescapable.

Opioid addiction becomes entrenched after a person’s neurons adapt to the drugs. The GABAergic neurons and other nerves in the brain still want to send messages, so they begin to adjust. They produce three to four times more cyclic AMP, a compound that primes the neuron to fire electric pulses, said Thomas Kosten, director of the division of alcohol and addiction psychiatry at the Baylor College of Medicine.

That means even when you take away the opioids, Kosten says, “the neurons fire extensively.”

The pendulum swings back. Now, rather than causing constipation and slowing respiration, the brain stem triggers diarrhea and elevates blood pressure. Instead of triggering happiness, the nucleus accumbens and amygdala reinforce feelings of dysphoria and anxiety. All of this negativity feeds into the prefrontal cortex, further pushing a desire for opioids.

While other drugs like cocaine and alcohol can also feed addiction through the brain’s pleasure circuits, it is the surge of withdrawal from opioids that makes the drugs so inescapable.

Could opioid addiction be driven in part by people’s moods? 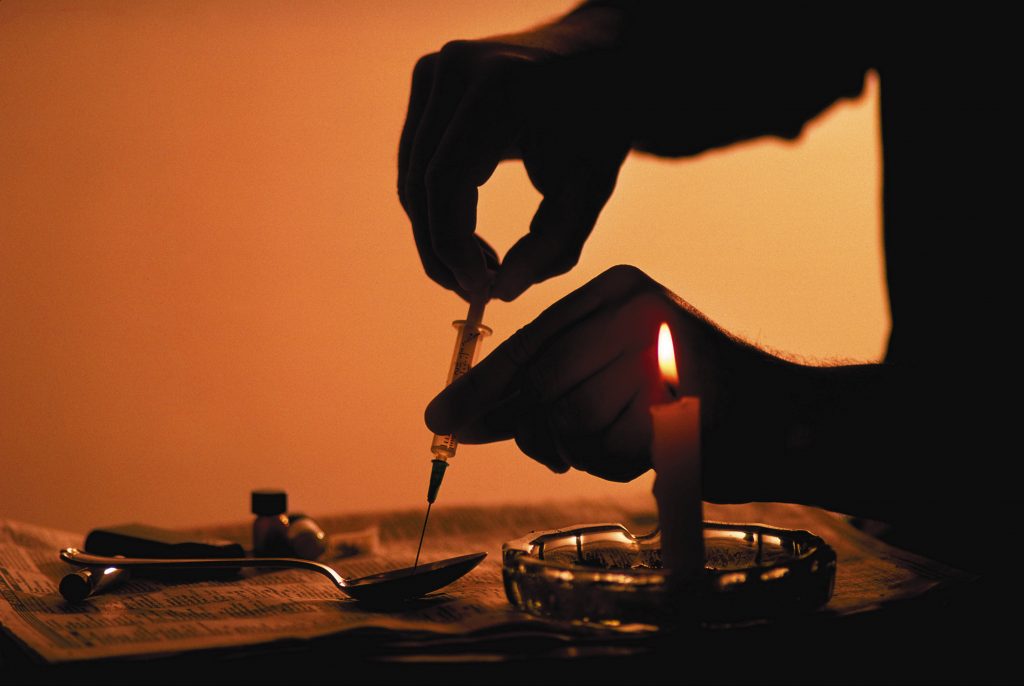 Chronic pain patients have a very high risk of becoming addicted to opioids if they are also coping with a mood disorder. Photo by Roy Morsch/via Getty

Cathy Cahill, a pain and addiction researcher at UCLA, said these big swings in emotions likely factor into the learned behaviors of opioid addiction, especially with those with chronic pain. A person with opioid use disorder becomes preoccupied with the search for the drugs. Certain contexts become triggers for their cravings, and those triggers start overlapping in their minds.

“The basic view is some people start with the pain trigger [the chronic back problem], but it gets partially substituted with the negative reinforcement of the opioid withdrawal,” Cahill said.

That’s why Cahill, Evans and other scientists think the opioid addiction epidemic might be driven, in part, by our moods.

Patients on morphine experience 40 percent less pain relief from the drug if they have mood disorder.

Chronic pain patients have a very high risk of becoming addicted to opioids if they are also coping with a mood disorder. A 2017 study found most patients — 81 percent — whose addiction started with a chronic pain problem also had a mental health disorder. Another study found patients on morphine experience 40 percent less pain relief from the drug if they have mood disorder. They need more drugs to get the same benefits.

People with mood disorders alone are also more likely to abuse opioids. A 2012 survey found patients with depression were twice as likely to misuse their opioid medications.

“So, not only does a mood disorder affect a person’s addiction potential, but it also influences if the opioids will successfully treat their pain,” Cahill said.

Meanwhile, the country is living through sad times. Some research suggests social isolation is on the rise. While the opioid epidemic started long before the recession, job loss has been linked to a higher likelihood of addiction, with every 1 percent increase in unemployment linked to a 3.6 percent rise in the opioid-death rate.

Can the brain swing back?

As an opioid disorder progresses, a person needs a higher quantity of the drugs to keep withdrawal at bay. A person typically overdoses when they take so much of the drug that the brain stem slows breathing until it stops, Kosten said.

Many physicians have turned to opioid replacement therapy, a technique that swaps highly potent and addictive drugs like heroin with compounds like methadone or buprenorphine (an ingredient in Suboxone).

These substitutes outcompete heroin when they reach the opioid receptors, but do not activate the receptors to the same degree. By doing so, they reduce a person’s chances for overdosing. These replacement medications also stick to the receptors for a longer period of time, which curtails withdrawal symptoms. Buprenorphine, for instance, binds to a receptor for 80 minutes while morphine only hangs on for a few milliseconds.

For some, this solution is not perfect. The patients need to remain on the replacements for the foreseeable future, and some recovery communities are divided over whether treating opioids with more opioids can solve the crisis.

Plus, opioid replacement therapy does not work for fentanyl, the synthetic opioid that now kills more Americans than heroin. Kosten’s lab is one of many working on a opioid vaccine that would direct a person’s immune system to clear drugs like fentanyl before they can enter the brain. But those are years away from use in humans.

And Evans and Cahill said many clinics in Southern California are combining psychological therapy with opioid replacement prescriptions to combat the mood aspects of the epidemic.

“I don’t think there’s going to be a magic bullet on this one,” Evans said. “It’s really an issue of looking after society and looking after of people’s psyches rather than just treatment.”