Step aside, poppy. Biologists in California and Canada have created strains of yeast that can feast on sugar and make opiates – the key ingredients in pain relievers like morphine.

The new study, published today in the journal Nature Chemical Biology, represents a coup for scientists and drug companies that currently rely on extracting drugs like morphine and codeine directly from poppies and other plants, a process that’s expensive and can yield impurities that cause harmful side-effects. The discovery could mean cheaper medications — where biochemists brew large batches of pure opiates overnight rather than waiting months for poppy fields to grow. It could also have dangerous consequences if it falls into the wrong hands.

“This work is going to enable the production of novel [pain-relieving] analgesics that are safer and less addictive,” said MIT political scientist Kenneth Oye, who co-wrote an accompanying commentary for Nature Chemical Biology about possible regulations and was not involved with the research. “The other part of the equation is if those yeast strains work their way into broad circulation, then you’re talking about fundamental changes in illicit drug production and distribution.”

Yeast could streamline the drug-making process by bypassing plants, which grow slowly and produce only small amounts of chemicals, and move the process instead to a beaker, where scientists could brew larger quantities of the drug.

To envision how researchers moved the opiate-making process from plants to yeast, picture a staircase with 15 steps. Glucose, a sugar compound, sits at the bottom, while the top level is filled with morphine, codeine and other members of a drug family known as benzylisoquinoline alkaloids (BIAs). At each step up, a different enzyme transforms sugar into a new compound, adding to the complexity of the chemical structure.

In the past, scientists relied on yeast for only the final steps, fabricating the opiates from the compounds created at the intermediate steps.

Scientists have known that yeast could also make the early stages of the process more efficient, but they’ve never isolated the right enzyme to make it work. At that stage, a compound is required called L-dopa, which is made by the enzyme tyrosine hydroxlase. Despite years of searching, scientists had never found a version of the tyrosine hydroxylase enzyme in plants, animals or bacteria that could work in yeast. And using yeast in both the early and late stages of the process would simplify the process.

Then in January 2014, William DeLoache — a biologist and graduate student at the University of California, Berkeley and lead author of the study – devised a way to fill the L-dopa void. At the time, DeLoache was working with the plant Mirabalis jalapa – the four o’clock flower, whose petals contain a protein that converts L-dopa into a highly fluorescent and colorful pigment, ostensibly to attract insect pollinators.

“William saw that this protein could serve as a means for detecting when L-dopa is present in yeast cells,” said John Dueber, a synthetic biologist and DeLoache’s thesis mentor at UC Berkeley.

For today’s study, DeLoache took the four o’clock flower protein and genetically added it to a yeast strain, creating a biosensor for L-dopa, a way for scientists to identify its presence.

“To me, the heart of the study is the sensor that they developed,” said biochemist Pamela Peralta-Yahya of the Georgia Institute of Technology. And that sensor, she explained, allowed them to identify the enzyme they needed to fill the gap in opiate synthesis. On a hunch, they spotted the enzyme in sugar beets.

“It’s known that L-dopa is an intermediate in the pathway that produces the pigment responsible for the beet’s violet color,” Dueber said. “So [DeLoache] took a guess at the beet’s gene [for tyrosine hydroxylase], inserted it into the biosensor yeast strain, and the cells glowed.” 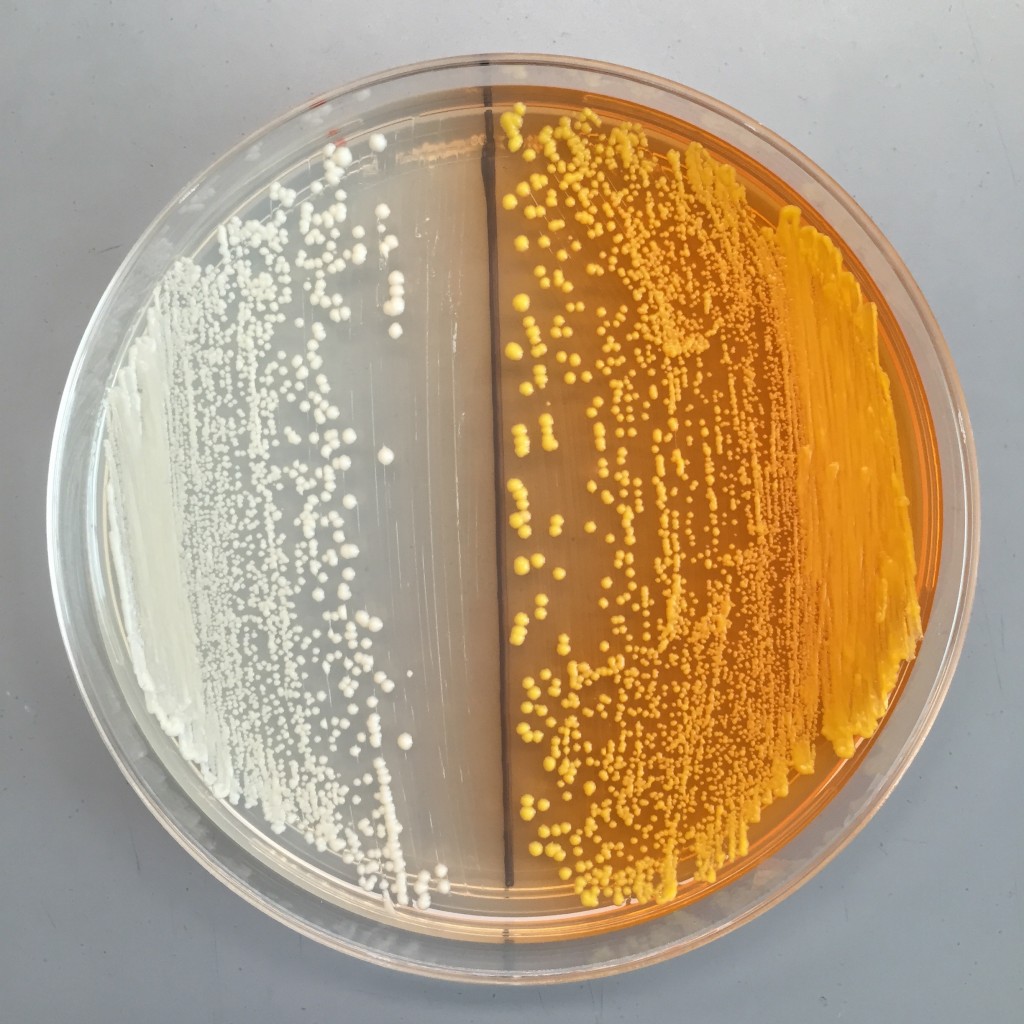 Yeast cells producing the yellow beet pigment betaxanthin, which UC Berkeley researchers used to quickly identify key enzymes in the production of benzylisoquinoline alkaloids (BIAs), the metabolites in the poppy plant that could lead to morphine, antibiotics and other pharmaceutical agents. (Photo by William DeLoache)

Colorful yeast cells were a neat trick, but their real mission was alkaloid production. So they took the glowing yeast and removed the protein that turned L-dopa into a bright dye. They tried replacing this pigment with a string of enzymes that could yield opiates.

At first, they struggled, so they reached out to co-author and microbial engineer Vincent Martin of Concordia University in Montréal.

“Vincent’s lab had demonstrated that they could execute these [first steps] in yeast to synthesize an anti-cancer drug,” Dueber said.

In the end, by collaborating with Martin’s team, the researchers built a yeast strain that could take glucose and pump out (S)-reticuline, the chemical predecessor for the entire family of benzylisoquinoline alkaloids – whose 2,500 members includes the painkillers morphine and codeine, the antibiotics sanguinarine and berberine, the muscle relaxant papaverine and the cough suppressant noscapine.

The final brewer’s yeast produces very low amounts of alkaloid, and right now, it is highly unlikely that a drug trafficker possesses the technology or scientists to recreate this study, Dueber said. Even if they did, they would get nearly undetectable amounts of opium.

But more potent strains are inevitable, he added.

“Whereas a year ago, I thought that putting all of these enzymes together into a single yeast cell might take a decade, now we’re thinking that high-producing opiate strains might be completed in two to three years,” Dueber said. “The regulations need to be reconsidered because they’re not currently written for microbial factories that produce a controlled substance.”

Worried by this accelerated timeline, the team took the initiative to contact Oye and other policy experts, so the latter could start an independent discussion on how to regulate illicit use, while still maintaining the ability to make alkaloids that could lower the cost of medicines or even create new, safer opiate drugs.

The fact that these scientists were even willing to talk about the risks at such an early stage was something that I hadn’t seen before, Oye said. Stricter regulatory policy might stifle the researcher’s ability to do future work.

Oye’s op-ed calls for licenses for producers and security systems to prevent misuse or theft. In addition, they recommend that DNA tags be added to opiate yeast, so if law enforcement confiscates a stolen strain, then they can trace the original source.

“You want to make these strains less appealing for illicit use, and at the same time, you want to make release of the strains into the general public far less likely,” Oye said. “We’ve taken an unusual step by contacting two regulatory authorities — the International Narcotics Control Board and International Experts Group on Biosafety and Biosecurity Regulation — to get this on the agenda as soon as possible.”

“The debate and discussion needs to take place before people fully realize the concept,” he said.

Left: Synthetic biologist at the University of California, Berkeley show off their brewer's yeast for opiates. The beaker on the left contains a yeast strain that changes color when a key ingredient for opiates is ready. This color-coded biosensor allowed the researchers to make (S)-reticuline (right beaker; white liquid), an important chemical predecessor of opiates like codeine and morphine.