Fossilized bubbles could expand our search for habitable planets

Look closely at the photo above. See the white spots in the rock. Those are the remnants of bubbles trapped in ancient lava, and they may be rewriting Earth’s history. New analysis of these bubbles suggest Earth’s early atmosphere had half the air pressure found today, making it almost as thin as the conditions atop Mount Kilimanjaro.

Catch your breath, because there’s more. If future studies replicate the findings, then it might dramatically revise the conditions believed necessary for supporting life — and change how we search for future habitable worlds.

You might be thinking, “Poppycock! How could holes twice the size of the tip of a ballpoint pen reveal anything about the cosmos?” Let’s start 2.7 billion years ago, when these bubbles formed. Earth at this stage, known as the Neoarchean era, was unrecognizable.

The sun was a wimp,” It emitted about 70 percent of the energy felt today.

“No grass, no animals, no trees,” said study leader and astrobiologist Sanjoy Som. “The moon was a lot closer, so the tides were stronger. The planet was spinning faster, and there was no oxygen. For all intents and purposes, it’s essentially an exoplanet.”

Plus the sun was a wimp. It emitted about 70 percent of the energy felt today.

“If the Earth back then had the same atmosphere as today, the planet would have been completely frozen over,” said Som, who also directs the Blue Marble Space Institute of Science. “But that was not the case. It was warm enough for liquid water to be present. There’s plenty of evidence in the rock record for rivers, for beaches, for rain.”

Plus, our planet was warm enough to breed life. The oceans teemed with microbes, the sole lifeforms on the planet, which were in the midst of transitioning to terrestrial habitats. Much like modern organisms, these microbes depended on warmth from the sun to stay alive.

This discrepancy is known as the faint young sun paradox, and researchers like Som believe greenhouse gases were the key. These gases could have trapped the weak warmth offered by the sun and maintained the planet’s early harmony. However, researchers disagree on what this ancient air looked like. 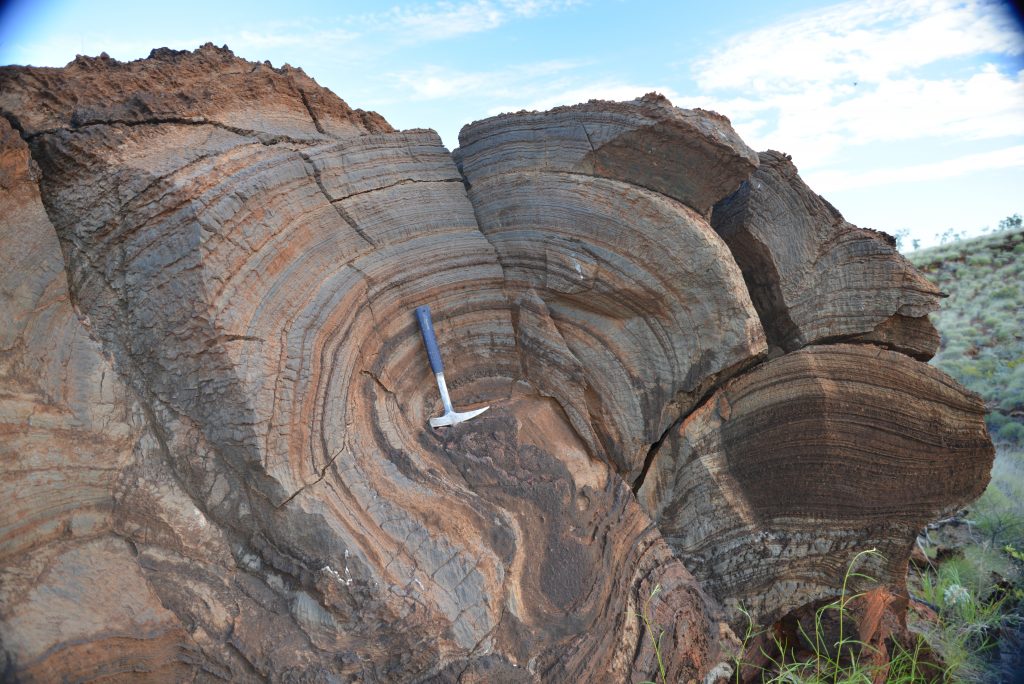 The layers on this 2.7 billion-year-old rock, a stromatolite from Western Australia, show evidence of single-celled, photosynthetic life on the shore of a large lake. The new result suggests that this microbial life thrived despite an extremely thin atmosphere. Photo by Roger Buick/University of Washington

Until recently, the leading hypothesis argued that extra nitrogen gas (N2) filled the skies, doubling the thickness of Earth’s air. Known as pressure broadening, the process could have created greenhouse gas effect that warmed the planet.

In 2012, raindrops began to erode this idea. Som published a report as a University of Washington graduate student, where he and his colleagues examined the imprints of 2.7 billion-year-old raindrops left in South African volcanic ash.

Thicker air causes raindrops to fall slower and make smaller impressions in the ground. By comparing the 2.7 billion-year-old impressions with those left by modern water droplets, the researchers could calculate the air density and air pressure of Neoarchean times. 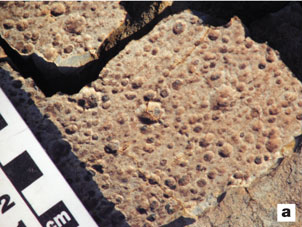 The team’s calculations suggested that ancient air pressure was most likely half of today’s levels. However, the project yielded a wide margin of error, and the absolute upper limit could still support the concept of higher pressures and loads of nitrogen gas in Earth’s ancient skies.

Still, Som’s early paper left a crack in the pressure broadening theory, and a year later, a separate group of European researchers added backup. They looked at quartz crystals that had been buried in the sea floor 2.7 billion years ago. These rocks trapped gas bubbles emitted by hydrothermal vents. Using chemical analysis, the researchers isolated pockets with nitrogen and measured the air pressure. Their math mimicked Som’s conservative estimates, suggesting a thinner ancient atmosphere.

All the while, Som and his partners had been testing an experimental technique that turned lava into a barometer.

“We did the fieldwork a long time ago actually, in 2005,” Som said. “But it took time to really be convinced by the answer.”

When lava flows, it cools rapidly from the top down and the bottom up. The cooling causes pockets to emerge inside the molten goop, which fill with gases. But the bubbles trapped at the bottom of the final hardened lava are often smaller than those at the top. Why? Air pressure.

“So if you know the size of the bubble at the top and the bottom, and you know the thickness of the lava, you can calculate air pressure,” Som said. He and his mentor geophysicist Roger Buick partnered with geologist Tim Blake at the University of Western Australia to find lava flows that once erupted along the country’s Neoarchean coastline.

Today, because sea levels rise and fall, these rocky deposits sit about 100 miles from the ocean, but they carry clues of a coastal past. One example is lava toes — little protrusions into glassy shards that indicate the molten rock plunged into seawater.

“That implies that virtually all of Earth’s nitrogen was not in the atmosphere back at that time. It had to be in either the crust or the mantle,” said Jim Kasting, a geoscientist at Penn State University who wasn’t involved with the study. Kasting voiced his surprise at the results, but the research made careful and concise estimations in his opinion.

Astrobiologist Colin Goldblatt, who crafted the concept of nitrogen pressure broadening in 2009, described the results as “extraordinary,” but in need of replication.

“Right now we only have one data point. A time series over a long period would make this really powerful,” Goldblatt told New Scientist.

Som agrees and plans to examine lava flows of different ages to map how air pressure evolved over time. Plus, he doesn’t think that his work contradicts Goldblatt’s approximation about high nitrogen levels.

“Colin Goldblatt actually said there was more nitrogen, but at an earlier time period than our rocks. So I think we’re converging on an answer here,” Som said. He thinks Earth’s atmosphere started with oodles of nitrogen, but the first bacteria used the gas for survival. The oldest known microbes date to 3.2 billion years ago and were likely nitrogen fixers that converted the gas into ammonia.

Once these microbes got going, they started pulling nitrogen from the atmosphere, thinning the atmosphere, Som said. This process continued until the Great Oxidation Event, 2.4 billion years ago, when photosynthesis-loving cyanobacteria began pumping oxygen into our atmosphere, replenishing it.

But Som is most excited by the implications this could have in the search for habitable exoplanets.

“By taking snapshots of Earth through time, when things were very different compared to today, it can give you another indication of existing worlds that could host life.” Som said. “The early Earth then becomes a fantastic lab to study habitable planets that are different than modern Earth.”

Left: Researchers compared bubble sizes from the top and bottom of the lava flows to measure the ancient air pressure and to reveal clues about other habitable worlds. Photo by Sanjoy Som/University of Washington