Butterflies are disappearing in Ohio. Here’s what that means for insects everywhere

For my 11th birthday, I received a perfect, weird, road-trip amusement: a book filled with pictures and descriptions to help kids decode the splatters of insects that smacked into the front of a moving vehicle. Whether that sounds like macabre fun or makes you grumble about keeping the windshield clean, a steep decline in reported bug splatters in recent years should actually make us worried, entomologists and ecologists say.

In a new study published Tuesday in PLOS ONE, a group of researchers analyzed one of the rare data sets that tracks butterfly abundance, taken from 21 years of volunteer surveys in Ohio. They found an average population decline of 2 percent per year, which means that over the course of the study, Ohio lost more than a third of its butterfly population.

Some species of butterflies showed no change in abundance, however, and a few others actually became more common.

“Not everything is going to decline in exactly the same way,” said Corrie Moreau, an entomologist and evolutionary biologist from Cornell University who was not involved in the new research. “But we are seeing, in this study and others, that insects are in a rapid fall.” 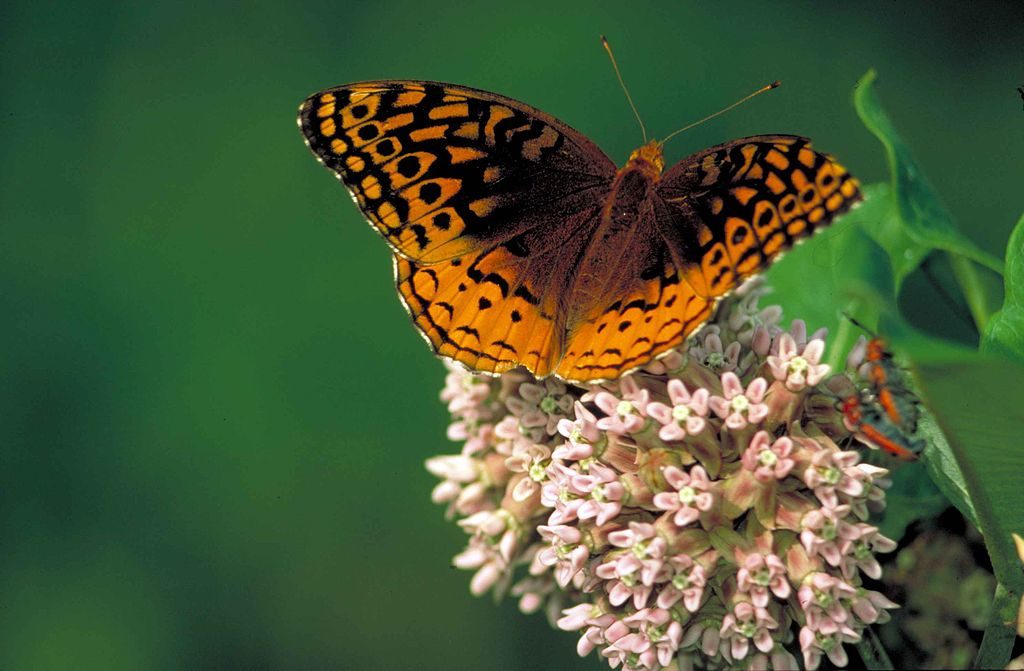 A great spangled fritillary butterfly. Many species are easy for volunteer scientists to identify from a distance with just a little training. Image by Thomas G. Barnes/USGS

Plenty of drivers tell stories about suspiciously clean windshields, and bikers have noted that they’re much less likely these days to swallow a bug while on a ride. Articles decrying a coming “insect apocalypse” have been popping up across news platforms like the New York Times Magazine and National Geographic. The Guardian claimed that the estimated rate of decline meant that insects, as a whole, could go extinct within a century.

The Atlantic, on the other hand, interviewed researchers who were skeptical of the claim. After all, while some insects are hurt by habitat loss, pesticide use and climate change, others benefit from urban environments and human intervention.

Why isn’t there a consensus about what’s happening and how dire the decline is? “We have had a gazillion anecdotes, but few very rigorously collected data sets,” said Arthur Shapiro, an evolutionary ecologist and biogeographer from the University of California, Davis, who has been monitoring butterfly populations in California for half a century. “That means every such data set is exceedingly welcome and exceedingly valuable,” said Shapiro, who was not involved in the new study.

The decline in Ohio’s butterflies is a harbinger of trouble for insects overall — bees, beetles, dragonflies and more. An overall drop in insect numbers and the eventual loss of some insect species would have a severe and significant effect, Moreau said. Trouble for butterflies could indicate trouble for bees, flies and other insects that together are responsible for the pollination and growth of up to three quarters of all human food crops. Meanwhile, we would lose a rich diversity of insect-eating birds, bats and amphibians, with cascading effects through almost every ecosystem on the planet.

Butterflies are a good target for this kind of bug-counting study, according to Moreau. Among the most well-studied groups of insects, “they’re one of the easiest to monitor,” she said.

The insects are often vibrant, easily spotted and easily identified as they fly by — no need to collect and kill them. With other kinds of insects — think tiny wasps, ants and flies — identification can require a specialized trap, an expert curator and a microscope.

Meanwhile, people form emotional attachments to butterflies in a way they often don’t with other invertebrates like spiders or ants. Their broad wings, bright colors and common use as a symbol of hope and change make them an attractive hobby for beginning bug-hunters and volunteer scientists.

Across the state of Ohio, thousands of volunteer scientists have been hiking familiar trails for more than 20 years with a specific task. As they walk their chosen trail each week from April to October, they identify and count every butterfly they can see within a certain distance of their path. Later, they submit that information to The Ohio Lepidopterists, a nonprofit dedicated to conservation and appreciation of butterflies, skippers and moths.

But as public interest in insect declines grew, Wepprich realized that he had an opportunity in the volunteer-led Ohio project.

Wepprich and his team used more than 24,000 volunteer-conducted butterfly surveys to create a picture of butterfly populations in Ohio every year between 1996 and 2016. It’s not as simple as just adding all the surveys up from a particular day, though — one of the challenges of participatory science is that observations can vary drastically as observers learn to identify more species, get replaced by other volunteers or miss weeks of data collection.

Shapiro, the biologist from UC Davis, has been conducting his own butterfly monitoring in California for more than 40 years. His work, visiting 10 sites in central California’s coasts, valleys and mountains, is one of the only other long-term North American insect abundance projects.

“This, in many ways, is a better-designed study than mine, because mine was never intended to be a long-term monitoring study,” Shapiro said. While his data was designed to track short-term variations, the Ohio study was “designed from the beginning” to take advantage of a dedicated volunteer force willing to collect information every year for the foreseeable future.

The overall numbers of butterflies in Ohio have decreased year over year for the past two decades — about 2 percent each year. When the researchers compared that rate to other long-term studies, the general decline matched the results of monitoring programs in the United Kingdom, the Netherlands and Spain.

But the team wanted to understand why some species of butterflies were harder-hit than others, and why some actually increased their populations over the course of the study.

They looked to see if related species of butterflies were all doing better or worse, and did not find a pattern.

On the other hand, they did notice that butterflies more commonly found in southern Ohio tended to do better than the more northern butterflies, perhaps because they are already better suited to respond to the planet’s warming climate. 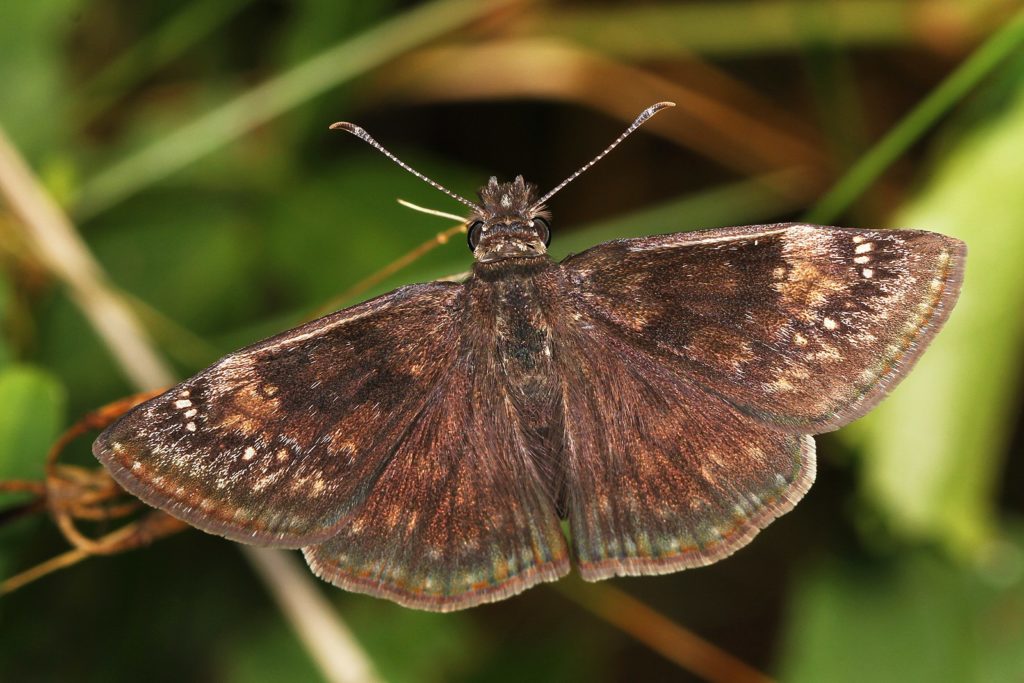 A wild indigo duskywing butterfly. The caterpillars of this species thrive on crown vetch, a plant often used for erosion control during construction projects. Image by Judy Gallagher/Flickr

“There are some weird cases too,” Wepprich said. “The wild indigo dusky-wing,” a brown butterfly with marbled wings that measure about an inch and a half across, “is doing really well in Ohio because a plant it eats is used as erosion control on construction sites. It’s three times more numerous now than it was 20 years ago.”

That’s intriguing, he said, because it demonstrates the massive — and rapid — effect that humans can have on insects with the dedication of relatively minor resources. It’s one note of optimism amidst a general trend of bad news.

Here’s how you can support butterflies and other insect populations where you live, according to the researchers.

Butterflies pollinate flowers, control plant populations by munching on leaves as caterpillars, and provide food for other insects, birds, amphibians and mammals. Their decline could have cascading effects on forests, prairies and even backyards across North America — vital wild habitats for an abundance of living things.

But butterflies also act as big, flashy beautiful warning signs for environmental change. “I think for most of us entomologists, butterfly data are being taken as a proverbial canary in the coal mine,” Shapiro said.

The decline of Ohio’s butterflies has been captured through statistics and recorded data rather than anecdotes, but the scientific literature abounds with anecdotes as well. One recent article from experienced researchers Daniel Janzen and Winnie Hallwachs, a pair who have studied tropical ecology in Mexico and Central America for half a century, warns that insects around the world are in the midst of a “gradual and very visible decline.”

The solution to a worldwide insect decline won’t be simple. “If it was just one thing, we would know how to fix it,” Moreau said. “But I think of the situation as, like, death by a thousand cuts.”

Habitat loss, the use of pesticides on huge swaths of cropland, and climate change all contribute to the disruption of natural systems, and the researchers believe any solution to a general decline in insects will need to address all three.

But the complexity and uncertainty aren’t an excuse for sitting on our hands, Moreau, Shapiro and Wepprich all agreed.

“I think we know enough now to act,” Wepprich said.

Left: A swallowtail butterfly on a flower. Image by Rob Liptak/Ohio Lepidopterists