Going Aboard the Drillship Discoverer Enterprise in the Gulf 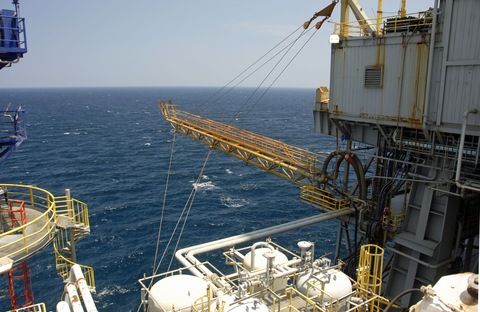 For months, the eyes of the world were focused on the images coming from the drillship Discoverer Enterprise.

Cameras aboard the ship’s ROVs, or remotely operated vehicles, provided part of the video stream from the blown out well, and people all over the world tuned in on television and the Internet to watch that eerie, pulsing flow of red-brown oil as it burst from the sea floor some 5,000 feet below the ship’s keel.

On Saturday, the NewsHour was part of the first media tour of the Discoverer Enterprise. A small group of journalists trudged around the massive vessel, at one point traversing a bridge that soared high above the main deck. That’s when we realized why our tour guides had asked if anyone had “height issues,” because one could see straight through the steel mesh floor to the deck far below.

It was this ship’s crew that finally succeeded in capping the Macondo well on the fourth try on July 15. During all those efforts, the ship was connected to the well, taking aboard and then transferring oil to other vessels. There was also a huge fountain of flame erupting from a steel boom projecting over the ship’s side, as she flared off the natural gas that was mixed in with the oil.

Discoverer Enterprise moved away after the flow was stopped and she’s now keeping station about a half mile away. She’s on standby, dangling an eighth generation containment cap from a steel cable over the side. One of her powerful ROVs is keeping a close eye on it. Should the current cap fail, Discoverer Enterprise is prepared to move back overhead and cap it again.

The ROVs are controlled by men working in a small, darkened room below decks using flat screen monitors and video game-like joysticks and throttles. They played a big part in attaching the containment cap that finally stopped the gusher. Pilot Ron Bretzke said it was “surreal” operating the machines while the oil was bursting from the sea floor, and that he now feels a great sense of relief that the job is nearing completion.

The ship’s captain Jim Stewart said they were well aware of the international attention focused on their ship, and that they heard those who were loudly wondering why it was taking so long to end the oil leak. Stewart told us that each step had to be meticulously planned, and that such planning is why the effort was ultimately successful — at least so far.

A drilling platform called the Q4000 and two support vessels are poised to try what BP and Transocean call a “static kill,” in which heavy drilling mud will be injected into the top of the capped well. If successful, the pressure will force the mud down into the well, pushing the oil back down the hole. Then a slug of concrete would be pushed in after the mud, sealing the well permanently.

We lifted off from Transocean’s helicopter base in Houma, La., flying aboard a large yellow Sikorski helicopter, which was identical to the ones we passed on the flight line. Unlike previous flights I’ve made in smaller helicopters, this chopper taxied from the ramp to the runway for takeoff. Once in position, the pilot lifted off and briefly hovered, doing a final system check before gaining attitude. We took two aerial turns around the flotilla of ships stationed over the blown-out Macondo well. Watch some of that flight here:

During the first portion of the 45-minute flight we passed over the wetlands of south Louisiana, which have been gradually washing away for decades. We also flew over the barge and steel boom barricade that was the subject of a NewsHour report on July 21. Finally we left land behind and flew over the Gulf itself. Two weeks ago it would have been streaked with oil, but on this day it was clear, deep blue — at least from altitude.

The companies still plan to complete one of the two relief wells, which would also inject mud and concrete into the bottom of the well 18,000 feet below the sea floor, sealing it at the point it penetrated the oil reservoir. Engineers believe that will be the ultimate “kill” of the well that created the worst environmental disaster in U.S. history.