Will cancer-sniffing dogs lose their jobs to a machine?

At the Penn Vet Working Dog Center in Philadelphia, Ffoster, a Labrador retriever, is hard at work. The dog sniffs furiously at an array of metal boxes containing blood samples mounted on a metal wheel, pauses by one of the samples, then sits, peering up at her handler Jonathan Ball for approval. “Yes!” Jonathan says, and Ffoster trots to his side for a reward.

Ffoster has detected cancer in less than a minute. More importantly she’s identified ovarian cancer, a disease for which there’s currently no early screening test. She is one of four dogs getting trained to smell this cancer as part of a study at the University of Pennsylvania. So far, when presented with blood samples of patients with and without ovarian cancer, she’s correctly sniffed out the cancer 90 percent of the time, according to Cindy Otto, the director of the Penn Vet Working Dog Center. This study at the University of Pennsylvania and the Monell Chemical Senses Center in Philadelphia is still in the early stages. In May, a group of researchers from Milan announced they had achieved a 98.1% accuracy rate with two dogs detecting prostate cancer. That study has been accepted by the Journal of Urology for publication next year.

Researchers in this field believe that dogs can sniff out changes in the volatile organic compounds (VOCs) that indicate the presence of cancer. George Preti, a researcher at the Monell Chemical Senses Center, published a study in July 2013 on the smells emitted by melanoma and is collaborating with the Penn Vet Center on the ovarian cancer study. He says it’s likely a collection of compounds that the dogs are smelling.

“Kind of like a symphony orchestra, each instrument is playing a part, but together they’re composing the sound you hear,” Preti said. “We are trying to identify the compounds that go into the odor signature. The dogs can hopefully tell us if we’ve picked the right compounds.”

The idea of dogs smelling cancer has been a subject of debate for decades, dating back to a 1989 article published in the medical journal The Lancet, titled “Sniffer dogs in the melanoma clinic?”

But dogs come with a hefty price tag. It costs about $36,000 dollars a year to train a cancer-detecting dog, and the dogs can only smell a limited number of samples each day. 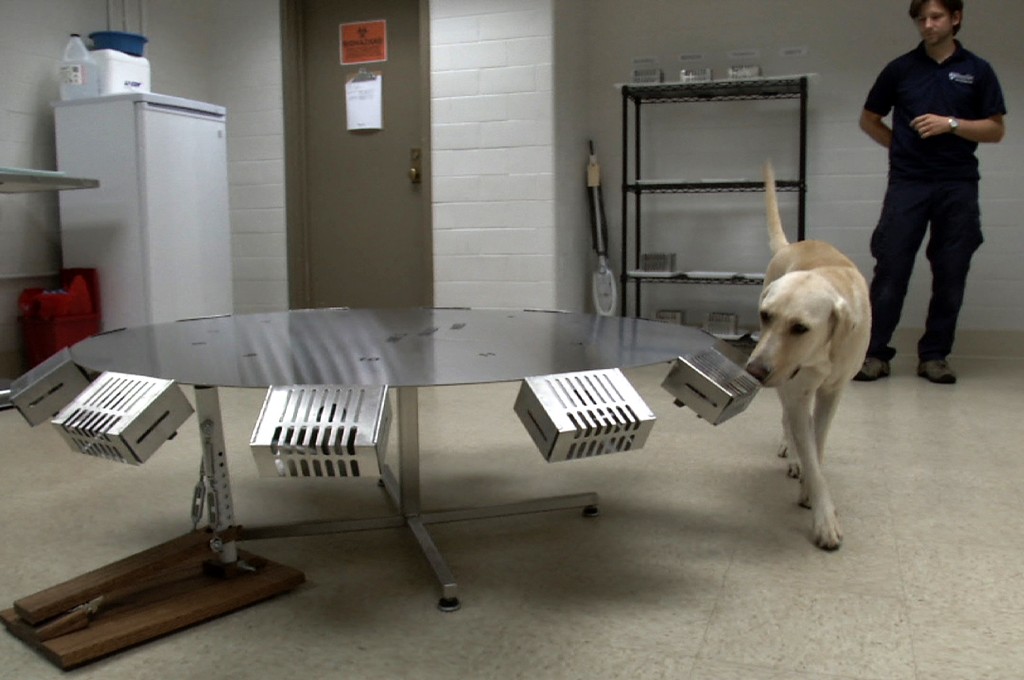 Now researchers are taking the phenomenon a step farther to develop the technological equivalent of the Labrador’s powerful sense of smell: an electronic nose, or e-nose.

A.T. Charlie Johnson, a physicist at the University of Pennsylvania, is studying this technology. His device uses carbon nanotubes: tiny cylinders made of carbon atoms and covered with strands of DNA.

The electronic nose is designed to simulate a human nose. Air inhaled through the nose travels into the nasal cavity, where it encounters the olfactory epithelium, a small strip of tissue containing millions of olfactory receptor neurons, the body’s smell receptors. These olfactory receptors interact with different compounds and send scent messages to the brain.

In the lab, the e-nose device is hooked up to a system of plastic tubes and vials. Through these tubes, researchers pipe in various gases, meant to replicate everyday smells like sweat. The sensor transmits signals to a computer, which reports the type and amount of VOC’s present in each gas. The ultimate goal is to move beyond detecting simple smells like sweat, but also more complex smells like those that represent cancer. Johnson has high hopes for the e-nose, which he thinks could one day be packaged as a test sold at drugstores. 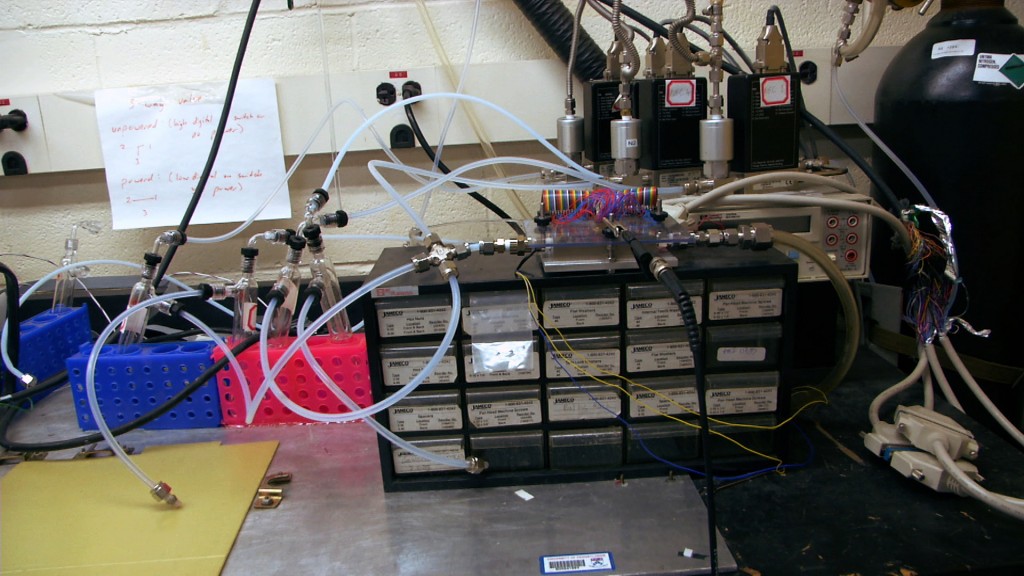 The electronic nose is designed to isolate chemicals in odor signatures in order to help diagnose diseases. Photo by Mori Roth

The goal is for this device to not just detect simple smells like sweat, but also more complex smells like those that represent cancer. Johnson has high hopes for the e-nose, which he thinks could one day be packaged as a test sold at drugstores.

“Basically right now the system is as big as a lab bench,” Johnson said. “It takes up a computer and a stack of electronics. But the whole thing could be miniaturized into a package even smaller than an iPhone.” While such a package may still be years off, other projects have had encouraging results.

At the University of Louisville, for example, Dr. Michael Bousamra thinks he may also be close to developing such a detector. He’s testing a microchip designed to identify lung cancer by isolating the VOC’s in a person’s breath. Bousamra has found four compounds that appeared in higher concentrations among lung cancer patients consistently.

“The probability of cancer was correlated to the number of cancer markers,” Bousamra said. “For example if you had four elevated compounds, it was always cancer. And in people who had advanced cancer, the breath analysis was always positive.”

Bousamra presented his results in January 2014 at the annual meeting of The Society of Thoracic Surgeons and says his test is twice as effective and has far fewer false positives than a Positron Emission Tomography, or PET scan, at a fraction of the cost.

But the test must first go through clinical trials and rigorous testing. Bousamra’s team recently created an improved chip, but they are still studying its ability to find very small tumors and accurately distinguish between benign and malignant cancers.

The technology is being used in other fields as well. In the 1980s, A. Dan Wilson, a plant pathologist at the USDA Forest Service, developed e-nose applications for plant disease detection as well as for a range of other uses. Wilson, who has published many papers on the subject, has since seen the field expand to aid in search and rescue, quality control for food, bomb detection and environmental protection. The e-nose might be useful in detecting other diseases associated with strong smells, such as endocarditis and metabolic disorders, which can result in a fishy or sweet smells in the urine, he said.

“There’s so many things you can do with the human breath,” Wilson said. “You can look at the general health condition of patients, and research says there are about 2,000 chemicals produced by healthy humans and released to the lungs.”

Left: Ffoster, a Labrador retriever, waits for a command from researchers at a University of Pennsylvania lab. Image by Mori Rothman