GIF: Christmas tree to blazing inferno in less than a minute

A dried-out, eight-foot Christmas tree can light, blaze and burn to ash in less than a minute, causing considerable damage in the process, according to research by the National Institute of Standards and Technology.

‘Tis the season for gigantic fire hazards in family homes. The National Fire Prevention Association reports that an average of 230 fires start with Christmas trees every year. Sure, that’s a small number, representing only .1 percent of all annual home fires . But a Christmas tree is a large fuel source, and once it starts burning, it burns fast and mean. According to the NFPA, Christmas tree fires kill six civilians a year, and cost an estimated $18.3 million in property damage.

“What makes them dangerous is they’re very large, and they’re very easy to heat up,” said Isaac Leventon, fire protection engineering graduate student at the University of Maryland. “The tree’s shape is almost optimized for burning, and then you leave it inside your home and let it dry out over weeks.”

Leventon runs An Introduction to Math and Physics through Fire Dynamics, a program for high-school students through the University of Maryland. 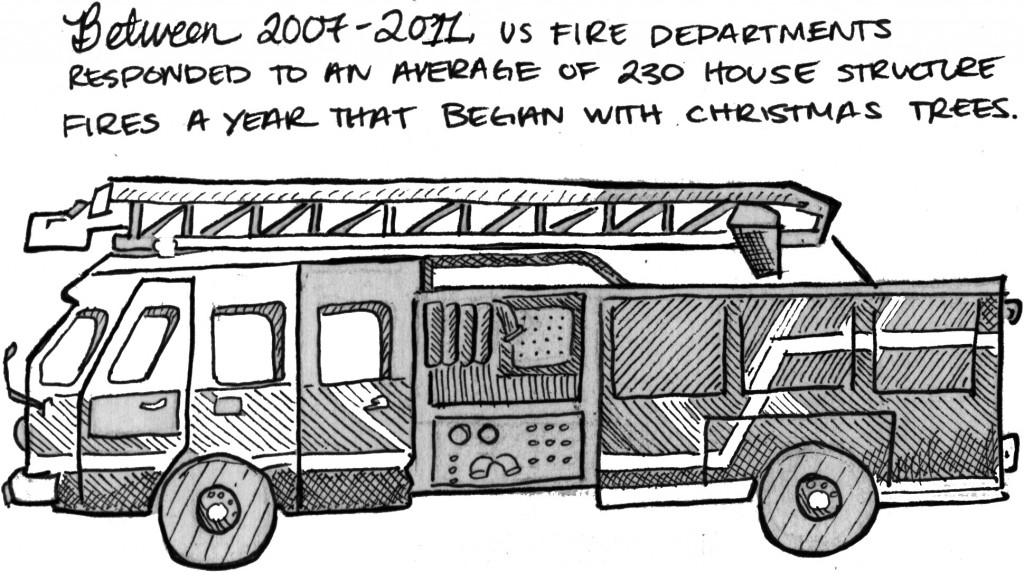 All fires need three things, Leventon said: fuel, an oxidizer and heat or an ignition source. Both natural and artificial trees provide a generous source of fuel. While natural trees are responsible for more fires every year, plastic trees made from PVC can release toxic hydrochloric acid as they burn — not something you want to breathe in, Leventon said. Plastic is a petroleum product, and thin plastic needles can burn just as quickly as a natural tree, he said. Plus, in a blaze, plastic trees can melt, raining liquid plastic onto the floor and forming a pool of fire at the base of the tree.

Real or artificial, the large surface area of the leaves makes them super flammable. Think about burning a book, Leventon said. Toss a closed, hardcover book on a flame, and it will take longer to burn. But if you laid the book open and lit several pages, the volume will burn much more quickly. Burning a tree works the same way, he explained. The widespread needles are thin and as flammable as tissue paper. They also allow air to flow through the tree, feeding the flames and accelerating the burn over the surface.

Once the needles catch fire, the wood begins releasing water vapor and other gases that promote the burning process, said Anthony Hamins, chief of fire research at NIST. The wood ignites and the flames typically spread upward and laterally to other branches. Temperature in the room rises quickly. Within seconds, flames are lapping the ceiling.

There are several factors that affect how fast and how hot the tree will burn. A well-watered tree takes a larger flame to ignite. In NIST’s study, a tree with 36 percent moisture content could not be ignited with a single match; it needed a propane torch to get going. When the torch was removed, the flames went out. Drier trees caught fire with just a few matches. At the zenith of the burn, the trees released between 1.6 and 5.2 megawatts of energy. 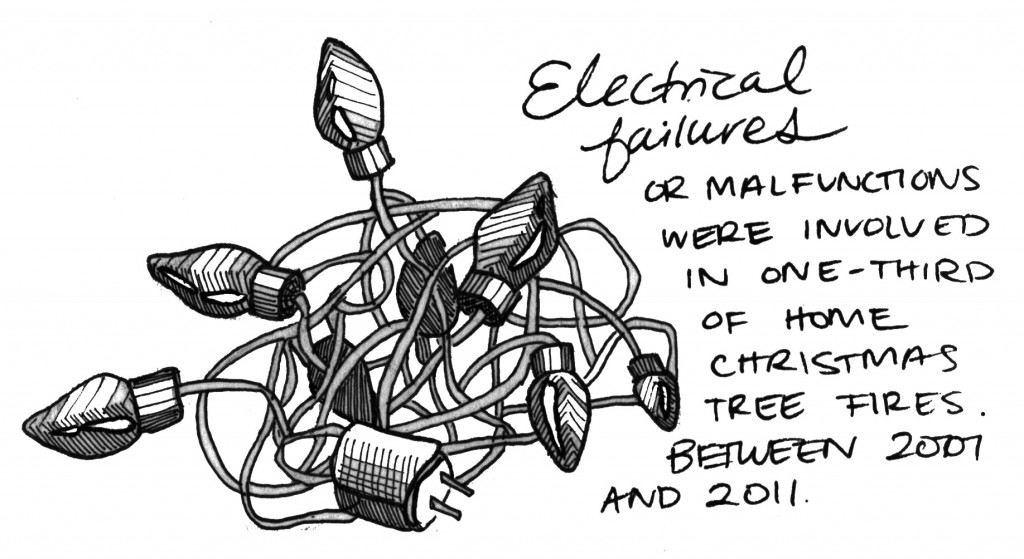 Here are some safety tips from the experts: If you’re getting an artificial tree, make sure it is certified as flame retardant by the manufacturer, said Lorraine Carli, a spokesperson for the NFPA. If you’re getting a natural Christmas tree, pick one with green needles that don’t fall off when you touch them. Before putting the tree in its stand, cut at least two inches off its base; make sure you water it daily. Keep the tree at least three feet from heat sources such as space heaters, candles, fireplaces, heat vents and lights. Throw out old Christmas lights with frayed cords, and don’t connect more than three strings of lights to one outlet. Turn off the lights on the tree before going to bed.

And once the tree dries out, throw it out, Leventon added. Dried Christmas trees can’t be rehydrated, no matter how much water you add, and shouldn’t be kept inside or even next to the house.

Understanding how a tree will burn in your living room helps engineers build models to predict how fires will behave on a much larger scale. But even knowing a tree’s mass and moisture content, these fires are exceptionally tough to model.

“It’s a very difficult problem — there’s fluid mechanics, solid and gas phase chemistry, heat transfer…Do we understand the physics of burning? Yes, but trying to model a tree burning is very difficult,” Hamins said, adding, “It’s shocking to see how fast a tree can burn and can cause fatalities. We need to inform the public.”

Left: Isaac Leventon, graduate student at the University of Maryland, sets fire to a Christmas tree for ﻿a program on fire dynamics for high school students. The tree was purchased free two weeks before when it was fresh and left to dry in normal room temperature and humidity conditions. Video by PBS NewsHour