Just Ask: Stink Bug Invasion; Is a Wasp the Solution to Save Valued Crops? 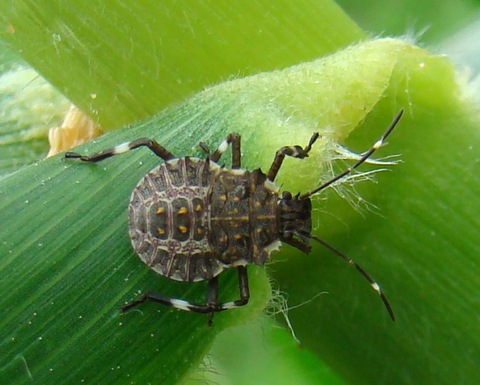 When it comes to fruit and vegetables, brown marmorated stink bugs don’t discriminate. They feast on peaches, plums, apples, and grapes, along with corn, tomatoes, peppers and soybeans. They extract fluid from the apples, turning them dry and corky, and then leave them to rot.

And when threatened, as their name suggests, the stink bugs release a pungent odor that smells like cilantro.

Farmers have been hard hit by stink bug damage since the brown marmorated species was first spotted in Pennsylvania in 2001, but the numbers have exploded in recent years.

Mark Seetin, director of regulatory and industry affairs for the U.S. Apple Association says that in the 40 years that he’s been in the industry, he’s never seen one insect pose such a big threat.

“Unlike a typical insect which focuses on a crop or a narrow range of crops, this bug eats virtually anything,” Seetin said. “The most unique and dangerous thing about this bug is its scope … I’m waiting to hear that it feasts on plastic plants in the hotel lobby.”

Scientists believe that the bug hitchhiked to the United States on a shipment of goods from Asia in the late nineties. It has since spread to 33 states, extending from the east coast all the way to California, Oregon and Washington, wreaking havoc on mid-Atlantic crops. The industry began noticing damaged crops in 2008, but it only recently expanded from a late-season problem to a season-long pest.

In 2010, mid-Atlantic apple growers lost 18 percent of their apple crop to the bugs, resulting in a $37 million loss, Seetin said. And our native predators and pesticides have little success at combating them.

“It is typical of an invasive species that it doesn’t have the natural enemies that it evolved with,” said Tracy Leskey, an entomologist at the U.S. Department of Agriculture’s Appalachian Fruit Research Station in Kearneysville, W. Va. “And a lot of the insecticides labeled as excellent against native stink bugs didn’t work as well as we’d hoped against the brown marmorated.”

“The most unique and dangerous thing about this bug is its scope… I’m waiting to hear that it feasts on plastic plants in the hotel lobby.”
Mark Seetin, U.S. Apple Association

Many are hanging their hopes on a wasp — from the trissolcus genus — that is an effective predator against brown marmorated stink bugs in China, Japan and Korea.

Kim Hoelmer, a research entomologist with the USDA Agricultural Research Service, began studying brown marmorated stink bugs in 2005. His team quickly determined that predators of other North American stink bugs were not switching over to include this new species in their diet. But they identified the parasitic trissolcus wasps in Asia, which eat nothing but these bugs.

“It’s all they can recognize as food,” Hoelmer said. “If they can’t find brown marmorated stink bug eggs, they die.”

These non-stinging wasps hold high promise for controlling stink bugs in the U.S., said Michael Glenn, director of the USDA’s Appalachian Fruit Research Station. “But much testing must occur before it could even be considered for release.”

The wasps attack like creatures from the movie, “Alien,” Hoelmer said. They lay their eggs inside clusters of stink bug eggs. When the wasp eggs hatch, the larva consumes the stink bug egg from the inside out.

“By the time the young wasp is mature and ready to come out, it’s eaten everything inside the brown marmorated egg except for the shell, “Hoelmer said. “Then it chews a hole in the shell and pops out.”

Both are tiny. A mass of stink bug eggs would fit on an adult’s pinky fingernail. The wasps are barely bigger than a pencil tip when they emerge.

Hoelmer is studying four different species of these wasps in a quarantined lab in Delaware. Under current guidelines for introducing an invasive insect into the wild, they won’t consider releasing the wasp unless they know it will only attack the brown marmorated stink bug and not other stink bug species. There are more than 200 species of stink bugs in North America; some are important predators of other insect pests.

But back home, they’ve provento be effective killers. “In Asia, two-thirds of egg masses have been found and killed by these parasitic wasps,” Hoelmer said. “So they really do have the potential to have a real impact on stink bug populations.”

Hoelmer thinks his team is about two years from knowing whether the parasitic wasps can be safely introduced into farms.

Brown marmorated stink bugs are named for the grey and brown marble patterns on their back. They feed by inserting a straw-like mouth part called a stylet, into the fruit. The stylet pierces and sucks sap from the plants, while they inject their own salivary juices. 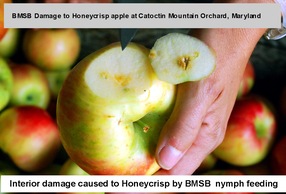 At the Appalachian Fruit Research Station, entomologists study behavior, olfactory cues and pheromones of the bugs, as well as the wavelengths and intensity of light that attract them. They are also researching a computer based vision system that would use near infrared reflectants to assess early damage to fruit.

But those in the field fear that any real solution is still years away. And in the meantime, it is doing a “breathtaking” amount of damage, Seetin said.

“Comparing this thing to the regular stink bugs we have is like comparing a guppy to a great white shark,” he said. “The only thing they have in common is that they’re fish.”