For Fishermen on Louisiana’s Coast, Guarded Optimism on an Oil Fix 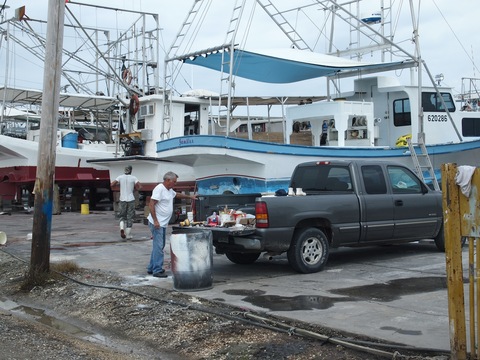 Out-of-work fishermen do maintenance on their boats at the Delta Marina in Empire, La.

“At least we’re taking more oil out of the Gulf than is going in,” says Billy Nungesser, president of Plaquemines Parish.

Been here before, and were disappointed.

We heard all of those phrases Friday morning in Plaquemines Parish in Louisiana. In the space of a couple of hours we interviewed the parish president, a fisherman, a local marina manager, and a cashier, and all expressed similar sentiments about the cap on the Macondo well. They were glad the gushing oil has stopped, but were also well aware that this is a test that could fail, just like other efforts to stop the flow have failed over the last three months.

Plaquemines Parish president Nungesser has been one of the loudest and most consistent critics of both BP and the federal government’s response to the blowout. He says things have improved in recent weeks, but he’s adopting a wait-and-see attitude. And he’s quick to say that even if the well is capped, it will still be months –a nd perhaps years — before the oil is completely cleaned up.

Tony Jennings runs the Delta Marina in Empire. He’s hopeful that news of the cap will send hundreds of sport fishermen to his docks, particularly since some of the recreational fishing grounds in nearby waters have been reopened. He says the test will come about 6:00 a.m. local time Saturday morning. Jennings hopes this is the begging of a return to normalcy.

Tammy Wolfer showed up to work early this morning, hoping an influx of customers would make her cash register in the marina store sing. It didn’t happen today, but she’s still optimistic. She really doesn’t have much choice. She and her husband refurbished a shrimp boat this year, fulfilling a longtime dream. But the dream was shattered when the well blew out, and like all of the other commercial fishers, they’ve been unable to catch shrimp for months. She says they had to let their car go back to the dealer and are barely able to keep groceries on the table.

Louis Barthelemy is a third generation shrimper also unable to take his boat out into the bay. He hopes the federal closures of commercial fishing grounds will be modified soon. In the meantime, he takes any jobs he can find. On Friday, he was scraping paint off of someone else’s boat, doing his best to make enough money so he doesn’t lose his own vessel.

Watch Tom Bearden’s report from the Gulf Coast on Friday’s NewsHour and find his story on efforts to rescue wildlife in the Gulf here.