Studying volcanic eruptions in person can be dangerous, and scientists have died trying. Volcanic lightning — yes, volcanoes make lightning! — by contrast offers a safer opportunity to examine what happens inside a volcano. But these bright bolts still occur in vicious environments, plus the thick, dense plumes of ash can obscure lightning strikes.

Now, scientists have developed a way to analyze volcanic lightning that is cost effective, relatively simple and safe. Rather than get near volcanic lightning or use expensive equipment, researchers at the Ludwig Maximilian University of Munich in Germany gain clues through a byproduct of the lightning: glass.

Volcanic lightning occurs during an eruption, when hot ash particles rise into the air and rub against each other. The heat and friction create a differential in electric charge that sparks a strike.

The lightning zaps in and out of the thick plumes of rising ash, making the ash so hot it sometimes turns into liquid. If the ash particles are heated sufficiently and given enough time to cool, they can morph into tiny glass spheres — no bigger than a dot from a pen tip. The glass particles then fall back to the ground and gather in large deposits.

“If the lightning event is too short, then the particle won’t melt in the first place,” said Fabian Wadsworth, a University of Munich volcanologist who led the study published in the Journal of Geophysical Research: Solid Earth. But if the heat diffuses into the particle and melts it, then two things happen. With enough time, the melting ash will round into a complete sphere thanks to surface tension. Or if the particle cools at a faster rate than the rounding, the final glass will remain jagged and angular.

Fabian Wadsworth and his team used computer simulations to develop a mathematical model that can predict what eruption conditions were necessary to create the various glass spheres.

A scanning electron microscope image of volcanic ash/glass deposit. Arrows point to the rounded glass balls — the ones that have been melted completely by heat. Photo by Wadsworth FB et al., Journal of Geophysical Research: Solid Earth, 2017

The researchers’ model allows them to work backward. By noting a glass particle’s shape, they can determine, the specific lightning conditions of any given eruption. Volcanic lightning strikes vary in temperature and duration. So as a result, the glass particles differ as well.

So simulating the conditions under which these glass particles form provides a better understanding of how the volcano erupted.

“For a long time it was anecdotal, so it’s been interesting to watch that transition develop,” said Stephen McNutt, a volcanologist at the University of South Florida who was not involved in the study. “Now you go to see talks at scientific meetings about volcanoes, and they’re starting to more routinely report lightning.”

In the past, scientists relied on instruments called Lightning Mapping Arrays (LMAs) that detect radio frequencies to resolve the electrical signals from lightning strikes. LMAs, combined with other instruments, allow scientists to create a 3D map of volcanic lightning with an accuracy of within 10 meters, McNutt said. But this technique is expensive and still doesn’t provide all the answers, such as the lightning temperatures. 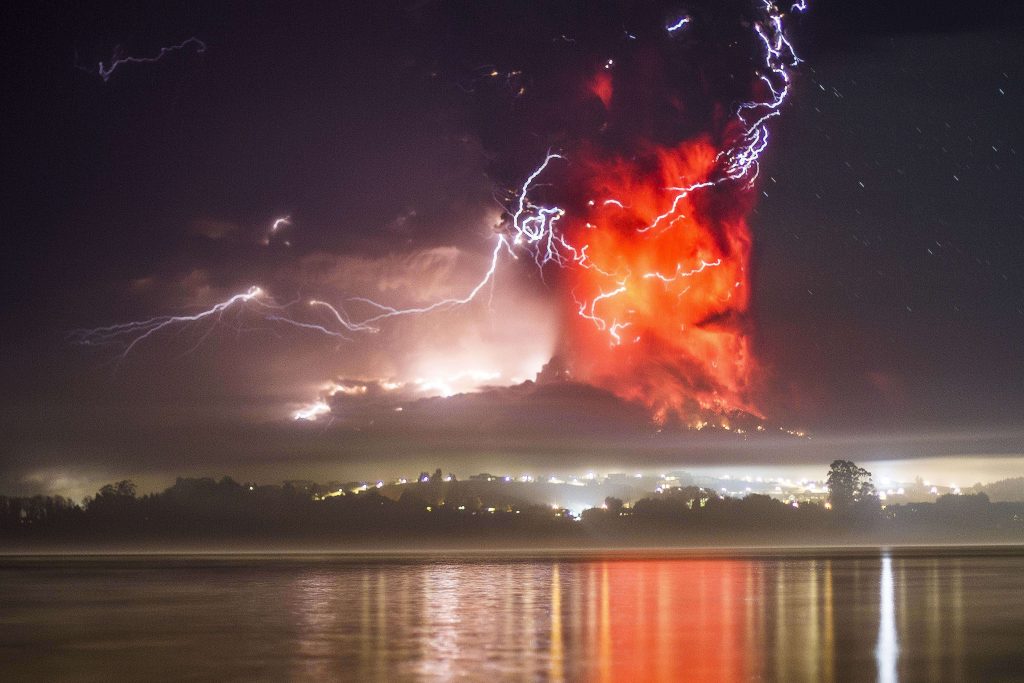 Wadsworth and his team demonstrated that, using mathematical tools, researchers can back track from big scale natural observations — lightning — to decipher detailed parts of the complicated eruption process. The seemingly small, inconsequential aftermath from the eruptions — glass particles — are akin to a new diagnostic test in a doctor’s office that can clear up portions of the bigger picture.

Plus, this work feeds directly into hazard mitigation for volcanic eruptions. When volcanic ash mixes with rainfall, it creates sludge that can collapse roofs. The traveling ash cloud can cause respiratory problems, damage machinery and stymie renewable energy generation by blocking solar panels. Wadsworth and his team have begun to test if and how well ash particles melted by lightning stick to jet engine surfaces. Knowing this information could guide planes around erupting volcanoes.

The ability to quickly analyze plume conditions, for less cost, will help scientists to foresee potential dangers in the aftermath of an eruption.

“Getting information quickly about the plume conditions helps us predict where plumes will go in certain wind conditions, which obviously helps us prepare for ash arriving in certain parts of the world,” Wadsworth said.