Gulf Residents Ask: Will Promises Be Broken on the Oil Spill Response? 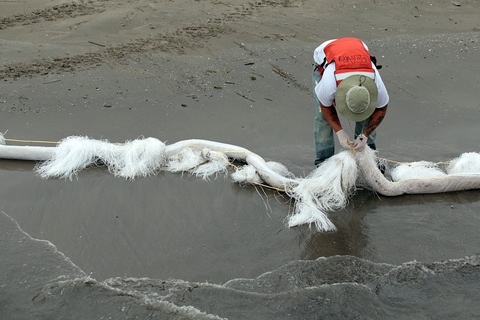 A lot of people in south Louisiana think the rest of the country is about to abandon them.

On Wednesday, the U.S. government announced that most of the oil from the Macondo well blowout is already gone — skimmed up, burned, evaporated — and seemed to imply that the crisis was pretty much over.

Jim Cowan, an LSU marine scientist, is deeply skeptical. When we talked, he was waiting to read the report, but points out that at one time the slick was the size of Kansas, and that scientists have confirmed that a lot of oil never reached the surface. Cowan says, “there’s no way there’s been time to do a full assessment of any of the oil beneath the surface.”

Ryan Lambert, a 30-year veteran charter fishing boat captain, thinks the report is an ominous sign that Washington is about to declare victory, pack up the huge cleanup operation and walk away, leaving Louisiana holding the bag. A lot of people we talked to say that’s exactly what happened after Hurricane Katrina, too.

Lambert believes the dispersant chemicals BP used were effective in getting the oil out of sight temporarily, but he thinks it’s all still there, lying on the floor of the Gulf and on the bottom of the estuaries where he has always made his living fishing. He says one of his guides put his boat into reverse the other day and “oil just came flying up from the bottom.”

Coast Guard Commander Claudia Gelzer, who runs the cleanup operations center in Venice, says if there’s a plan to start wrapping up the cleanup, nobody has told her about it. BP’s cleanup chief in Plaquemines parish said the same thing: He’ll be here until things are back to normal. He showed us an impressively large beach cleanup operation near the mouth of the Mississippi, where thousands of workers are still scooping up puddles of oil on isolated islands accessible only by air boats, and vowed to continue until they’re all free of oil.

But the skeptics ask, “what’s the definition of clean?” Many think the damage to the ecosystem won’t be fully understood for years. Professor Cowan thinks that the whole fishery — the most productive in the country — could be nearing a tipping point. He also thinks that the oil spill, coming on top of decades of marshland erosion and other environmental insults, could cause the entire ecosystem to crash.

Watch Thursday’s NewsHour for more from Tom Bearden on reactions in the Gulf to the latest oil spill developments.

Ryan Lambert’s first name was incorrect in an earlier version of this story.