Abandoned African penguin chicks are easy to spot. Their flippers are too long for their bodies. Their chest bones are visible through their newborn plumage. They haven’t been fed by their parents for weeks because the adult birds are molting and unable to hunt in the ocean.

While adult penguins can survive 21 days without food, baby chicks cannot. Under normal conditions, the chicks would be out of their nests and able to survive the fast. But sparse fish populations around the South African shore limit chick’s growth and keep them nesting when adults reach the critical point when they must molt. 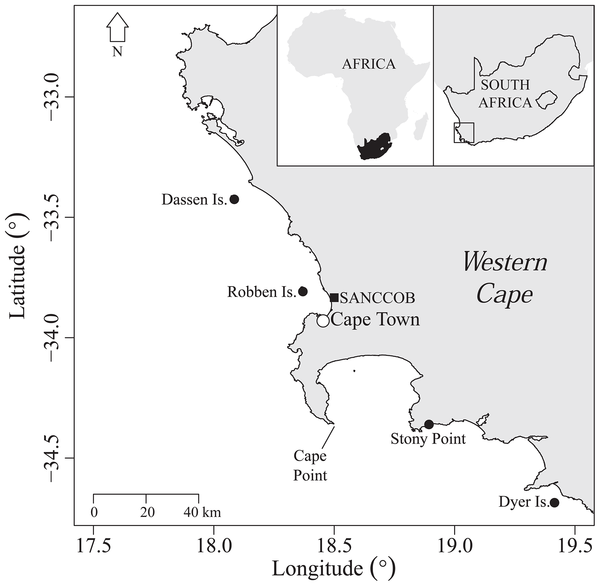 In response, researchers from the University of Cape Town hand-reared hundreds of malnourished chicks from penguin colonies Dyer Island, Robben Island and Stony Point at the South African Foundation for the Conservation of Coastal Birds in Cape Town. The researchers admitted over 800 penguins in 2006 and nearly 500 in 2007.

Most of the chicks were underweight for their age; researchers fed them a formula of liquidized fish and vitamins.

The penguins were marked with flipped bands then released back into the wild after an average month and a half of human care. The hand-raised chicks were just as likely to survive as their naturally-raised counterparts.

This success is promising for other seabird species facing dwindling populations. So long as the birds don’t attach to their surrogate human parents and can cope with living in captivity, humans raising baby birds could be a solution.

African penguin populations have shrunk by more than 70 percent since 2011, and the species has been classified as endangered since 2012.

“Hand-rearing of African penguin chicks is a valuable conservation tool in light of the declining population,” the researchers conclude in the full study, “Hand-Rearing, Release and Survival of African Penguin Chicks Abandoned Before Independence by Moulting Parents,” which was published Tuesday.

In the South African ecosystem, the baby penguins’ problems can be traced back to fish populations. Sardines and anchovies are African penguins’ main food source. Between rising sea temperatures and overfishing, especially of sardines, there aren’t as many fish to feast on as there were in previous decades.

Less fish means smaller or less frequent meals for the fledgling penguins. As a result, the baby birds are growing slower and are still chicks when their parents begin to molt. Unlike some birds, who shed a few feathers at a time, penguins must replace all their feathers at once. Since they don’t have waterproof feathers while molting, they stay on land and don’t hunt for the entire process.

Hand-rearing the chicks could help conserve the species in the short term, but the current colonies can only support so many penguins.

“We’re putting them back out into the colonies from where they came,” he said. “We’re trying to slow down the decline of colonies that are disappearing very rapidly.”

Sherley is curious how the human-raised penguins would fare if they were released as pioneers of new colonies on different parts of the South African shore.

The South African government is also experimenting with fishing regulations. The now-defunct South African Department of Environmental Affairs and Tourism closed fishing around two pairs of islands. The penguin chicks around St. Croix and Bird islands were , and the area will soon be off-limits for fishing permanently. However, data for Robben and Dassen Island were inconclusive, and there is ongoing debate about whether to allow or halt fishing around the second pair of islands.