If all goes according to plan, two spacecraft will commence close encounters of the curious kind with two separate asteroids by the end of August. Their goal: to retrieve samples that may contain organic materials dating back to the solar system’s birth. These building blocks may be key to understanding the origins of the planets and of life on Earth — and could also make future space prospectors very rich.

Japan’s Hayabusa2 probe is on track to arrive at a kilometer-wide asteroid called Ryugu on June 27. On August 17 a NASA craft, OSIRIS-REx, is scheduled to arrive within sight of a roughly 500-meter-wide asteroid called Bennu. These space rocks will be the focus of approximately two years of sensor surveys and efforts to collect samples for scientists back on Earth to analyze.

“There are going to be so many groups around the world that are going to be able to study the samples for decades to come,” said Nancy Chabot, a planetary scientist at the Johns Hopkins University Applied Physics Laboratory, who is not affiliated with either mission.

The new data, she said, are “really going to revolutionize what we understand about the composition and the makeup of these primitive bodies from the early solar system.”

Hayabusa2 and OSIRIS-REx will not be the first missions to retrieve an asteroid sample. That honor went to Japan’s first Hayabusa spacecraft, which in 2010 returned to Earth with a tiny sample from the asteroid Itokawa after an unplanned crash on its surface. Itokawa is representative of so-called S-type asteroids, which consist primarily of stony materials. 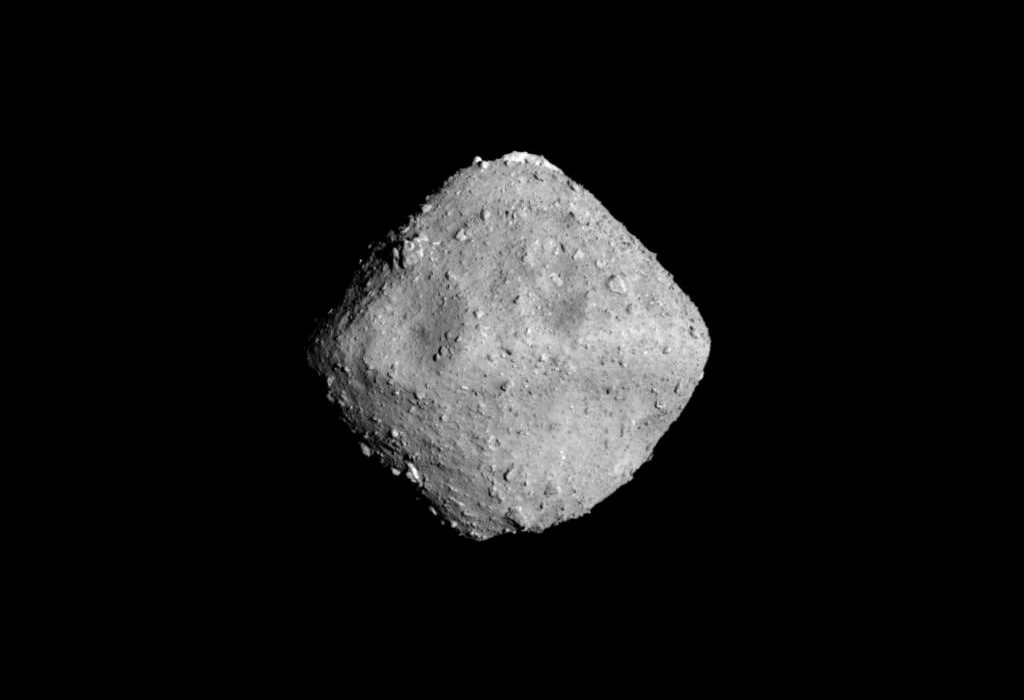 Asteroid Ryugu is photographed by the ONC-T, which is equipped on Hayabusa2 probe, in outer space 280 million kilometer from the Earth, on June 24, 2018. Given its circuitous route, the probe has traveled around 3.2 billion kilometers since its launch in 2014. Photo by JAXA-Tokyo University/Handout via REUTERS

In contrast, Ryugu and Bennu fall into the carbonaceous (C-type), or carbon-containing, class of asteroids—the most common space rocks in the solar system. Taken together, samples delivered by OSIRIS-REx and Hayabusa2 could confirm that these asteroids have a composition similar to those of “carbonaceous chondrite” meteorites discovered on Earth.

Such meteorites contain organic compounds, in addition to water locked inside hydrated minerals. But these meteorites may have been contaminated by Earth’s surface. If the composition of the asteroids matches that of the meteorites, it would suggest the compounds could have been brought here from space.

Carbonaceous meteorites “very well may have been, at least in part, the source of water on Earth and the compounds that lead to life,” according to a joint statement by Harold Connolly, a co-investigator and mission sample scientist for OSIRIS-REx, and Shogo Tachibana, a mission sample scientist for Hayabusa2. This hypothesis could be reinforced by bringing back the first pristine samples from carbonaceous asteroids.

Launching two very similar missions may seem redundant—but it could be informative, Chabot explained. “If the samples [from both asteroids] turn out to be identical, that would be telling us something very fundamental about how homogeneous materials were in the solar system,” she said. “But my money is on the samples showing us some surprising differences.” 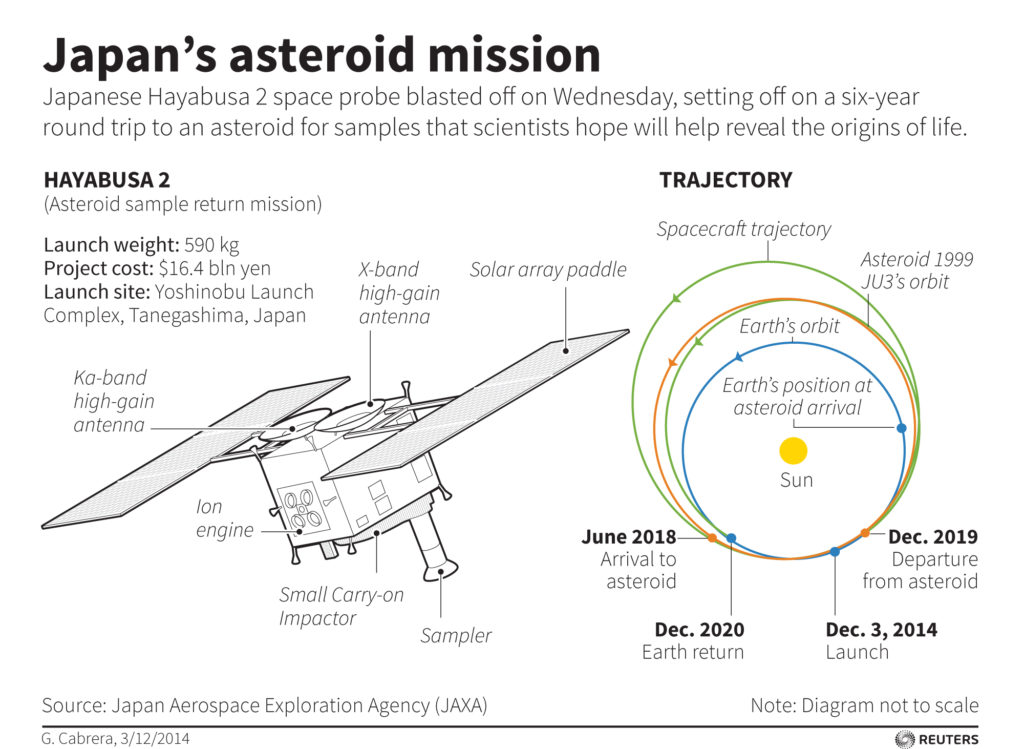 Outline of Japan’s Hayabusa2 mission — a six-year round trip to an asteroid for samples. Chart by Reuters

The two missions also have distinct operational phases. Beyond surveys and collecting samples, Hayabusa2 will attempt to place up to three robotic rovers and a European-built MASCOT lander on Ryugu to explore its surface. The Japanese mission also plans to fire a two-kilogram copper projectile at the asteroid; in this way, scientists hope to create a crater that would reveal its internal composition.

The first Hayabusa mission brought back less than a milligram of asteroid dust from its historic and harrowing journey. The new missions could retrieve a far larger haul of pristine space rock, making it easier for researchers to share and analyze samples.

Hayabusa2 aims to collect three samples from different locations on Ryugu, netting approximately 100 milligrams. OSIRIS-REx will attempt to collect up to two kilograms from a single spot on Bennu’s surface. Scientists from both missions plan to exchange samples and cooperate closely throughout: Connolly even works on both OSIRIS-REx and Hayabusa2.

These missions may also provide valuable information for asteroid-mining operations, Chabot said. She serves as a scientific adviser for Planetary Resources, an aspiring asteroid-mining company based in Redmond, Wash. It is one of several firms hoping to eventually harvest minerals from space rocks, as well as water, which they could convert into rocket fuel to power future missions in the distant solar system.

Hayabusa2 and OSIRIS-REx are not scheduled to return to Earth until 2020 and 2023, respectively, but the payoff will almost certainly be worth the wait. Many labs are still squeezing new science out of the Apollo lunar samples decades later, as improving techniques and instruments allow investigators to reanalyze old specimens.

This article is reproduced with permission from Scientific American. It was first published on June 26, 2018. Find the original story here.