Here’s how Republicans and Democrats feel about science news

Republicans and Democrats are equal consumers of science news, but the latter are 14 percent more likely to be pleased with what they hear or read. This is one of many takeaways from a new survey on “Science News and Information Today” published Wednesday by the Pew Research Center, a nonpartisan fact tank.

Overall, U.S. adults view stories about medicine, health, food and nutrition as the most helpful for their everyday lives.

The survey reveals that science museums were most beloved by the public, while people found general news outlets to be the least trustworthy for accurately portraying science. (Ouch!)

Here’s more about what the study found.

What they measured: From May 30 to June 12, Pew asked approximately 6,700 adults about their views on science communication and the media engagement habits; however, the final pool of participants contained 4,024 people that was nationally representative.

Favorite places to find science: Curiosity was the number one reason that Americans sought science news.

Overall, 54 percent of Americans engage with science content on a regular basis from general news outlets, which was the most popular source for science news. But only 28 percent of respondents think general news outlets get the facts right most of the time. By comparison, 45 percent look to documentaries for science updates, and 52 percent trust the information in those films. 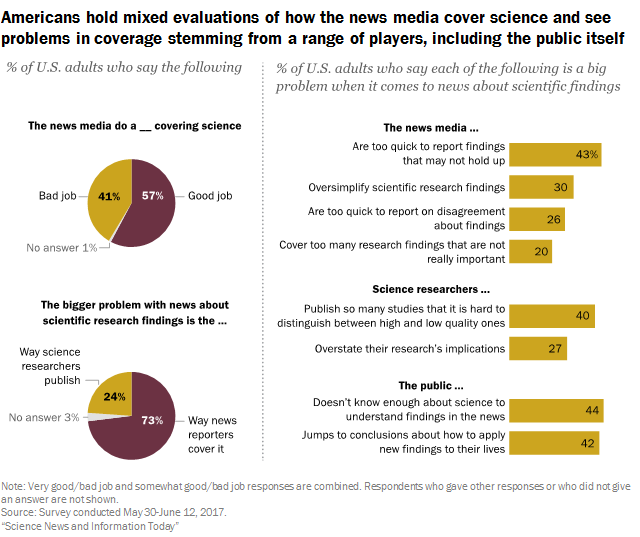 How Americans feels about the ways that news outlets cover science. Chart by Pew Reserach

While few (12 percent) get their science news from museums and zoos on a regular basis, the respondents judged these places to be the most trustworthy for facts. Moreover, most Americans (62 percent) had visited a zoo, science and technology museum or a national, state or county park within the last year.

One-third of Americans get their science news from friends and family, but only 17 percent actually discuss what they read or hear with others.

Et tu, social media? Seventy percent of Americans use social media, but they have mixed opinions about the science news popping into their feeds. 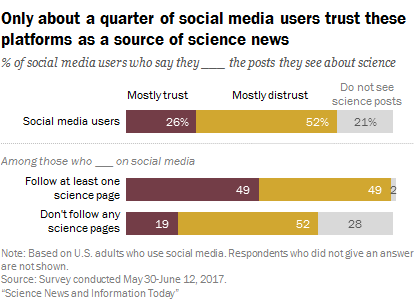 Most social media users do not trust science news that they see on social media platforms. Chart by Pew Research Center

And here’s the kicker. Even when they do see science news in their feeds, most social media users — 52 percent — do not trust it. This trend may be due to the diversity in the quality of what folks post.

Overall, U.S. adults view stories about medicine, health, food and nutrition as the most helpful for their everyday lives.

Politics of science news: A similar proportion of Democrats (17 percent) are as likely to actively consume science news as Republicans (18 percent). But two-thirds of Democrats stated their appreciation for the quality of the coverage, while the number for Republicans was 50 percent. Most Republicans (53 percent) said the news media is too quick to report findings.

Though 97 percent of scientists agree human-caused climate change is happening, the American public views this topic as possessing the most disagreement among scientific experts featured in news stories, by a large margin. Previous Pew studies have noted large political divides in American views on climate change and energy. 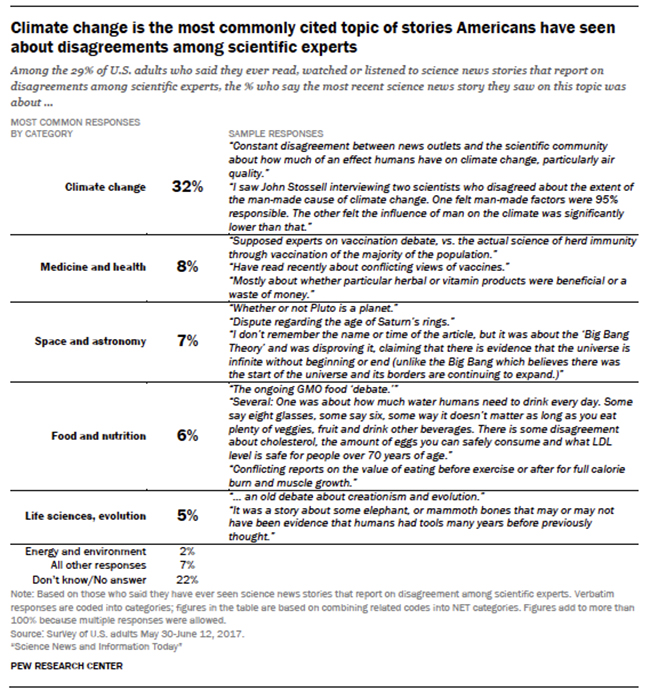 Despite an academic consensus on the issue, Americans feel the most disagreement among scientific experts in news stories occurs with ones focused on climate change. Table by the Pew Research Center