How bad is the measles comeback? Here’s 70 years of data

With 1,044 cases as of June 13, America’s measles outbreak has sent the nation back in time.

In the first few months of 2019, the epidemic reached the worst level in a single calendar year since the disease was declared eliminated in the U.S. in 2000—and then it got worse, matching and then surpassing a 25-year record. The U.S. hasn’t had this many measles cases since “End of the Road” by Boyz II Men and “Baby Got Back” by Sir Mix-a-Lot dominated the Billboard Top-100 in 1992.

Places like New York City and Washington state declared health emergencies. The latter is one of many states—including New York and California—rethinking or eliminating their vaccine exemption policies, which include exceptions for religious belief. 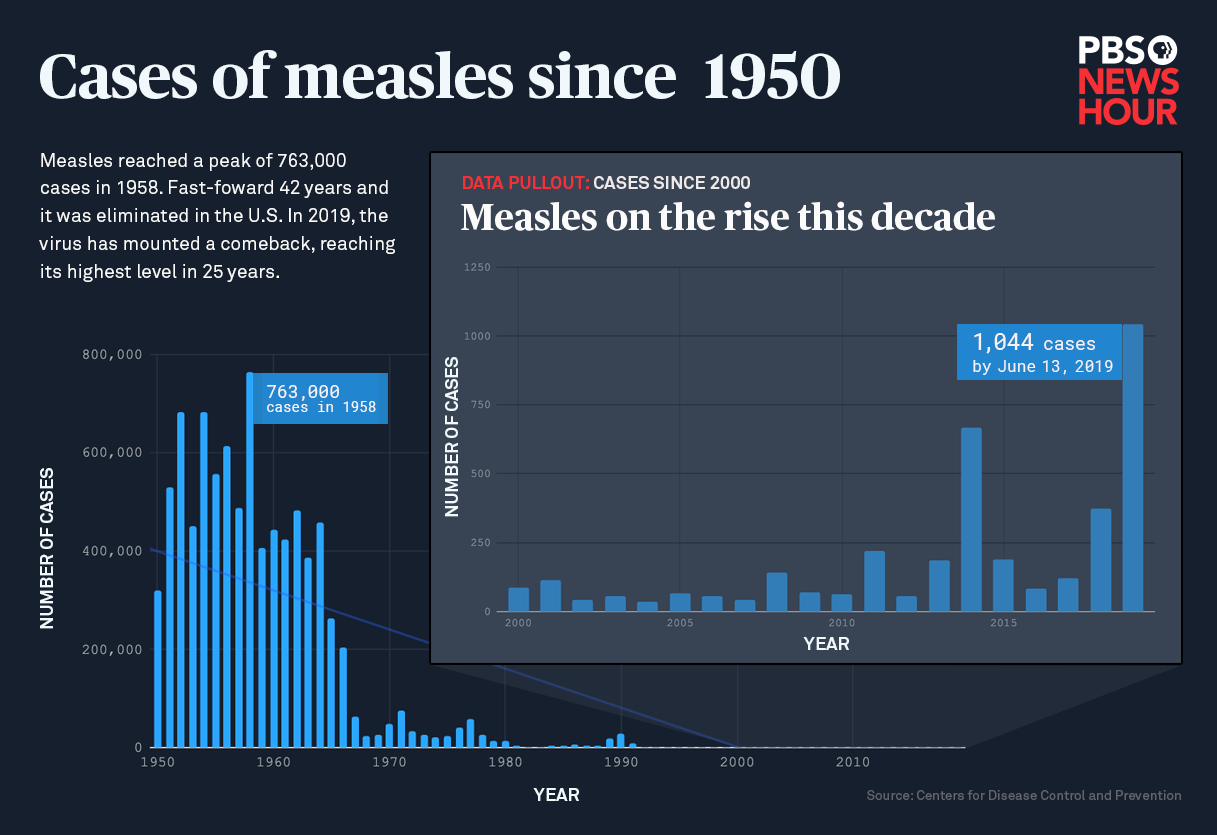 Measles cases in the U.S. since 1950. Infographic by Vanessa Dennis

No deaths have been recorded as a result of this year’s outbreak. Today, patients rarely die of measles, at least not in the U.S. But in pregnant women, the virus is known to cause fetal developmental issues, as well as miscarriages.

READ MORE: There’s a measles outbreak. Do you need another shot?

Every day this outbreak persists, the U.S. ventures closer and closer to the days when measles ran amok due to a lack of public health knowledge and resources. The 1980s, for example, were marked by tens of thousands of people contracting measles. A simple policy switch in 1989—giving people two doses of the vaccine instead of one — helped eliminate the disease by the time the first millennials had grown old enough for college.

We’ve been here before, but many people alive today cannot remember those years filled with school quarantines, stillbirths and deaths. Here are key moments and outbreaks in the nation’s measles history.

Christopher Columbus and the first colonists arrive in the Americas, an event that would ultimately introduce a cornucopia of diseases including influenza, diphtheria, mumps, smallpox and measles to indigenous populations.

The fallout presents a lethal lesson that remains true today about infectious conditions like measles: They spread rapidly among humans who lack previous exposure, including the unvaccinated. One unprotected person with measles can easily spread it to 18 others.

A Boston merchant records the first outbreak of measles.

Officials require all U.S. health care providers and laboratories to report diagnosed measles cases, creating the first somewhat reliable statistics at a national level. During the first decade of measurements, deaths from measles range from 4,700 to 14,500 per year.

The U.S. experiences its highest-known number of measles cases in a single year — 763,094. The same year marks the first test of a measles vaccine, which occurs at a school for students with mental disabilities in Boston.

Such institutions were prone to severe and lethal outbreaks due to the close living quarters. Every parent was informed and gave consent before the children participated.

This first immunization is a “chicken-attenuated vaccine,” made by taking the original pathogen, injecting it into chicken eggs and then inactivating it with heat. Those concoctions were then tested in monkeys — given their genetic similarity to humans — to work out the kinks before administering to humans. This innovative procedure was developed by John F. Enders, Samuel L. Katz, Milan V. Milovanovic and Ann Holloway.

This first trial created antibodies against measles — the tell-tale sign of immunity against the disease — and also spawned mild side effects like moderate fever and rash. The vaccine trial worked. The school stopped experiencing measles outbreaks. Over the next five years, the team would workshop the first vaccine to reduce its side effects.

The first measles vaccine is licenced, based on the work done by Enders and his colleagues. Measles cases in the U.S. drop 95 percent over the next five years, from 385,000 to 22,000.

The modern measles vaccine is released by Merck. 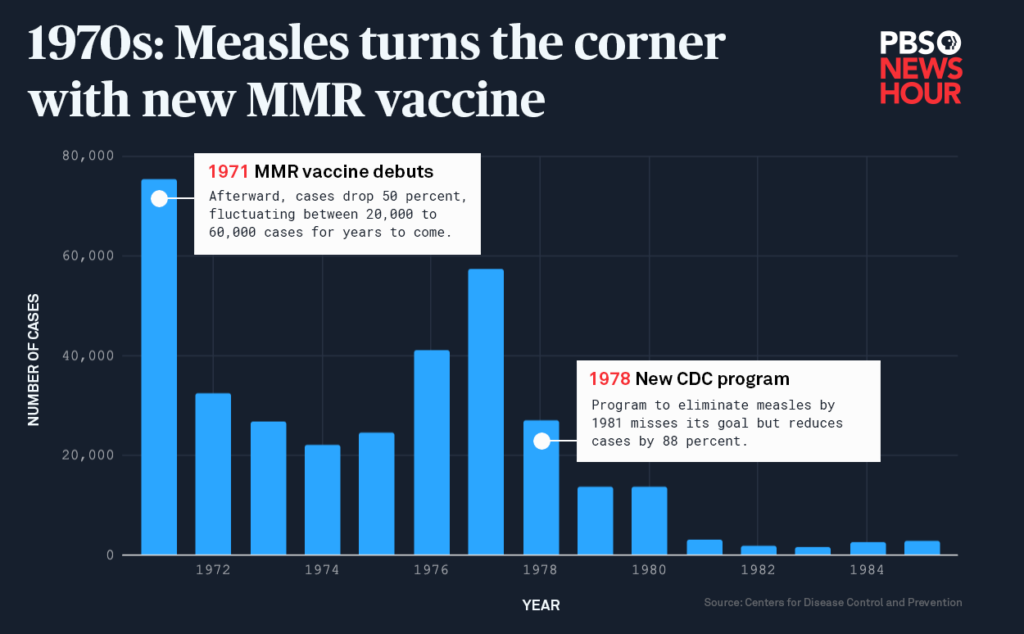 The Measles, Mumps and Rubella vaccine debuts and replaces the measles-solo vaccine. Merck scientists say they developed the MMR vaccine to simplify the childhood vaccination process and reduce the number of times people need to visit the doctor for shots. Measles cases drop 50 percent, but remain stuck between 20,000 to 60,000 cases for years to come.

The Centers for Disease Control and Prevention institute a program to eliminate measles in three years. It misses its goal, but reduces measles cases by 88 percent (3,000 cases in 1981).

The CDC recommends two doses of MMR, following policy implemented in Europe. This guidance arrives just as a measles outbreak hits the U.S., creating 55,000 cases between 1989 to 1991. 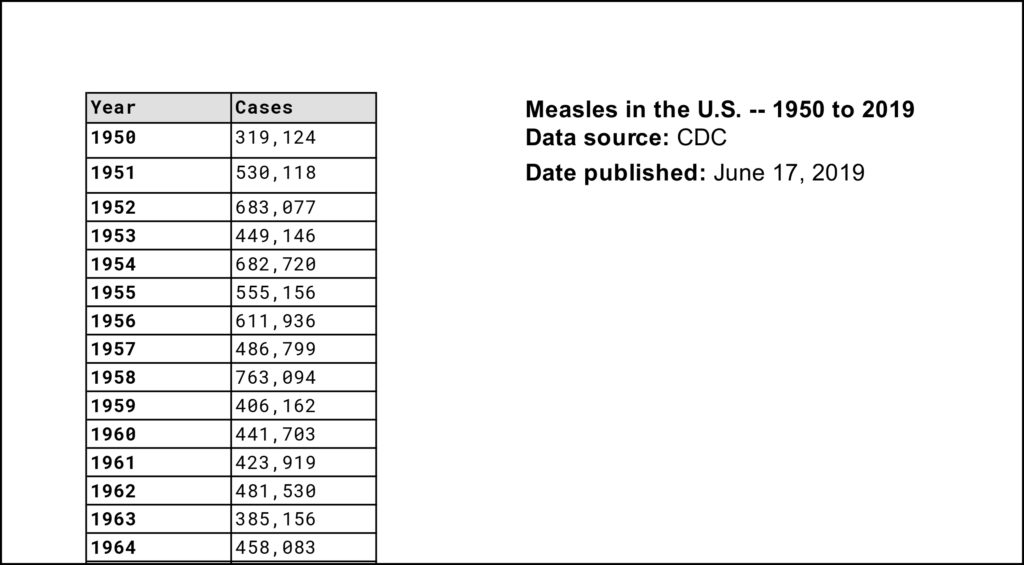 Click the image to see the full record of measles cases in the U.S., 1950 to June 13, 2019. Data via the Centers for Disease Control and Prevention

In a paper that was later retracted and discredited, British researcher Andrew Wakefield questions the safety of the MMR vaccine in Lancet, claiming a connection between immunization and autism. The report receives widespread media coverage. Immunization rates in the United Kingdom plummet in the years after, and the discredited study inspires vaccine hesitancy across the Western world.

Investigations would later reveal that Wakefield had been paid by a lawyer working on a lawsuit against the vaccine producer. Several follow-up studies have failed to find a link between autism and the MMR vaccine. 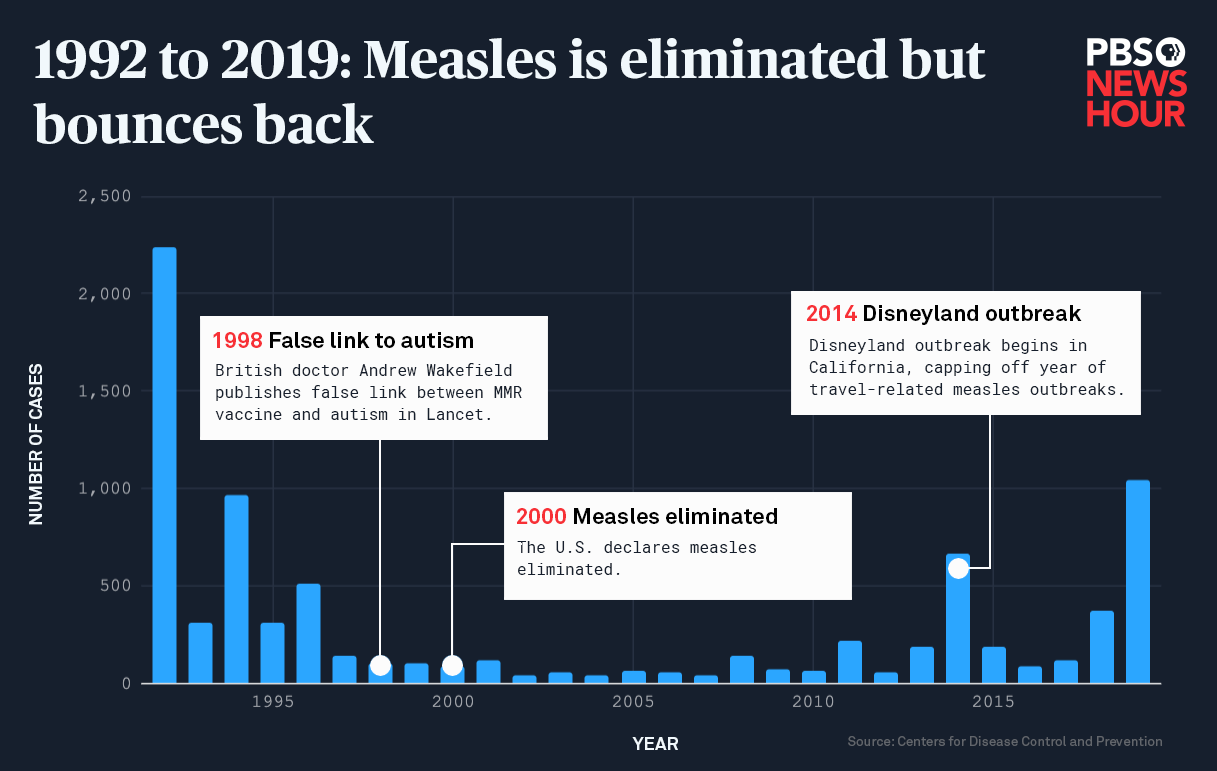 Measles is declared eliminated from the U.S., meaning continuous transmission of the disease has not occurred in the country for more than 12 months.

Measles cases surpass 200 for the first time since elimination, driven by U.S. travelers catching the disease overseas. Measles breaks out in European countries — namely France, Italy, Romania, Spain, and Germany — and ultimately spreads across the continent.

The U.S. records 667 measles cases across multiple outbreaks caused by imports, mostly from the Philippines, raising concerns about the integrity of herd immunity. The year ends with an outbreak at Disneyland in California, which spills into the subsequent year.

Measles reaches a tally not seen in more than 25 years, driven mostly by outbreaks in New York’s Rockland County and New York City.