How Close Are We to Finding an Earthlike Planet? 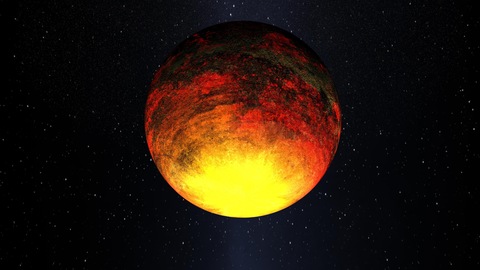 And what constitutes an “earthlike planet” anyway?

The Kepler Space telescope has found a small, rocky planet, the smallest yet found orbiting a star outside our solar system, the Kepler team announced Monday at the annual meeting of the American Astronomical Society. The finding brings us a step closer to the planet scientist’s holy grail: a planet small enough and temperate enough to host life.

Scientists have found some 500 exoplanets beyond the solar system, but most are large gas planets, like Saturn or Jupiter, too gassy to support living things.

“What’s extraordinary and important and unique about this new planet is that it’s definitively solid,” says Geoff Marcy, a University of California, Berkeley astronomer and a co-investigator on the Kepler team. “It’s a big ball of rock like earth, and astronomers have never before discovered a planet that is definitively a solid piece of rock… This new planet reminds us more closely of home than any other before.”

But there’s a big catch. It’s fantastically hot, hot enough in some places to melt iron.

Kepler-10b, which is 560 light years away, is 1.4 times the size of earth, and 4.5 times more massive, but too hot to be habitable. It is tidally locked to its host star, so one side always faces toward the sun. Its star is 11.9 billion years old, more than twice as old as our sun, but similar in mass and radius, and just a smidge cooler in surface temperature.

It was detected using two telescopes. The Kepler Space Telescope measured Kepler-10b’s size by detecting a shift in brightness each time the planet crossed in front of its host star. The Keck telescope studied the gravitational movement, or wobble, of the star to determine the planet’s mass.

“We started taking measurements with Keck in August 2009,” said Natalie Batalha, deputy science team leader of the Kepler Mission and a professor of physics and astronomy at San Jose State. “Every time a new data point came in, it fit perfectly like a puzzle piece into the picture.” Keck measurements showed high frequency variations in the light from vibrations within the star itself – star quakes. Scientists used that information to probe its interior and structure.

Marcy defines an “earthlike planet” as a planet that has roughly the size and mass of the earth. “The darn thing better be solid so that life can form in the ooze and puddles and gook on the surface of the planet,” Marcy said. “So you need a surface. Second…it must have conditions that make it suitable for life. It can’t be scorching hot and it can’t be frigid cold.”

Of the 500 exoplanets discovered, none are truly earthlike. But this rocky world represents a transition planet for the Kepler team, whose mission is to search for earthlike planets, and determine whether they’re abundant in our galaxy.

So does Kepler-10b give scientists more hope that a planet like earth, rocky enough
and temperate enough to support life, is out there?

Not quite, Marcy says.

It’s a step in the right direction, he says, but “only half a step on the Armstrong scale.” The key to the answer is whether the planet formed like earth, as floating dust particles that collided and agglomerated into big chunks of rock, like snowflakes that form to become ice chunks.

If it did form this way, then it is likely part of an enormous population of earthlike planets that orbit other stars — tens of billions of them, Marcy says.

“There’s a whole zoology of planets we expect might emerge between the earths and the venuses and neptunes,” Batalha says. “And we’re calling those super earths. We need to find planets in that super-earth regime.”

But another possibility is that Kepler-10b is the remnant of a giant gas planet, destroyed by radiation from its star and stripped down to its rocky core.

“Does it tell us immediately there are other habitable earths out there,” Marcy says. “It’s a very strong hint, but it ain’t proof at all.”