How Galileo’s groundbreaking works got banned

A brilliant Italian scientist, mathematician and astronomer, Galileo Galilei knew, as few others did in his time, that the Earth revolved around the sun. And when he refused to be silent about it, he spurred his own scientific revolution.

The phrase “Eppur si muove” (“And yet it moves”) is famously attributed to him – the punchline of an apocryphal anecdote that expresses just how sure he was of his research.

Born on this day 458 years ago, Galileo helped perfect the use of a new tool – the telescope – to study our solar system. Starting in 1609 and continuing over the next few years, he would gaze each night at the heavens and report on a multitude of stars formerly invisible to the naked eye. He also identified hills and valleys on our moon’s surface, and four of Jupiter’s largest satellites, among other discoveries.

They accused Galileo, an observant Catholic, of being a heretic who contradicted the veracity of the Holy Scriptures.

From his copious reading, Galileo became a great admirer of the Polish astronomer Nicolaus Copernicus, whose “On the Revolutions of the Heavenly Spheres” is a landmark study in the history of astronomy. In this 1543 book, Copernicus became the first explorer of the skies to posit a concept called heliocentrism, in which the Earth rotates on its own axis each day and, like all the planets in our solar system, revolves around the sun.

Here’s the rub: Copernicus’s theory and, eventually, Galileo’s telescopic proof ran counter to the teachings of the most important authority of his era, the Catholic Church. The clerics, backed by a gaggle of natural philosophers, insisted that our world was at the center of the universe, and that the sun, planets and even distant stars revolved around a stationary Earth. They accused Galileo, who was an observant Catholic, of being a heretic who contradicted the veracity of the Holy Scriptures — an uncomfortable situation to find oneself, especially in Italy during the second decade of the 17th century.

Galileo argued vociferously against the biblical claims refuting the Copernican model. He wrote letters laying out his arguments to his student, Benedetto Castelli, in December of 1613 and to the Grand Duchess Dowager Christina in the spring of 1615. These letters were so incendiary, at least to the churchmen, that Galileo went to Rome in December of 1615 to defend his ideas. His intellectual arguments, mathematical models and telescopic data failed to impress the Catholic authorities, and in February of 1616, Cardinal Robert Bellarmine took him aside and privately warned him to comply with the orders of the Church and stop writing or discussing his ideas—or else.

Galileo had little choice. In March of 1616, the Catholic Church’s “Index of Prohibited Books” published a statement (but without naming or charging Galileo) declaring that any theory suggesting the Earth revolved around the sun was false and, worse, such notions contradicted the ultimate source, the Holy Scriptures. The same decree banned Catholics from reading Copernicus’s book.

Galileo managed to continue his work and keep quiet for almost a decade. But in 1623, the Cardinal Maffeo Barberini was elected pontiff, and the new Pope Urban VIII was an admirer of Galileo’s. The astronomer believed he could finally speak his piece.

In 1632, after several meetings with the pope, Galileo published his “Dialogue Concerning the Two Chief World Systems,” a long discussion between three characters comparing Copernican theory with older models. The Dialogue, Galileo argued, was on safe ground because he had written in hypothetical terms; he convinced himself that he didn’t explicitly “defend” Copernicus in the book because he made certain to include both sides of the debate.

Though it got by church censors, it deeply offended Pope Urban VIII and the Jesuit priests advising him. New charges were raised against the astronomer, not just for the contents of his book challenging the church’s authority, but because he had gone back on his word. 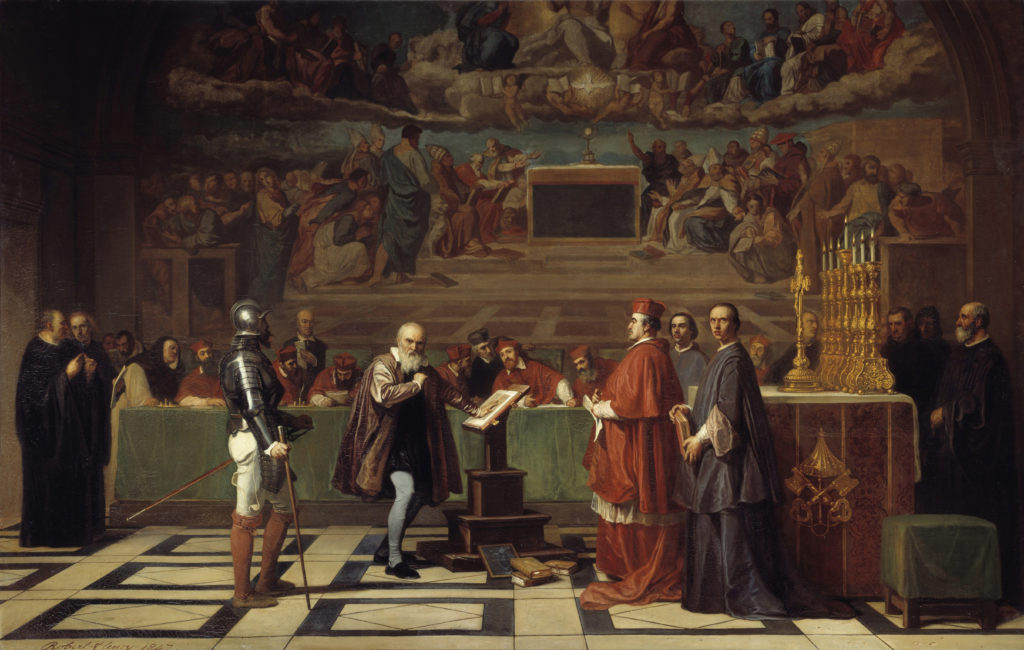 Galileo Galilei before the Holy Office in the Vatican. The astronomer was condemned by the Tribunal of the Inquisition for having defended the theories of Copernicus in 1632. Painting by Joseph Nicolas Robert-Fleury, 1847. Photo by Leemage/Corbis via Getty Images

Galileo was summoned to Rome and tried in April of 1633. At the trial’s end two months later, he was found guilty of “vehement suspicion of heresy” for his treatises on astronomy and for refuting the Bible as the final authority on Renaissance science. His Dialogues were banned, and he was forced to humiliate himself publicly by reciting what was known as an “Abjuration” – in essence, a public statement retracting his work. Historians have argued for centuries over what happened next. Was Galileo physically tortured during the inquisitorial interrogations? How was he intellectually battered by the Church? Was he imprisoned, and for how long?

Maurice A. Finocchiaro, a philosopher of science, spent years studying the rise and fall of Galileo. He has concluded in his two books, “The Galileo Affair: A Documentary History” and “Retrying Galileo, 1633-1992,” that while the astronomer may have been threatened with physical torture, Galileo probably did not experience the real thing—although this hardly rules out the possibility of psychological torture.

The astronomer never went to a formal prison, per se, but was placed under house arrest during the 1633 trial and for the remaining nine years of his life. As anyone in our COVID world can attest, staying in the house for long periods of time is not all it’s cracked up to be.

As anyone in our COVID world can attest, staying in the house for long periods of time is not all it’s cracked up to be.

Did the famed astronomer mutter the phrase “Eppur si muove” to his inquisitors? His saying that the Earth does, indeed, move would have been quite the gutsy move of his own, considering the result would have likely landed him in a world of pain. Most historians of science agree that it is safe to assume those words were, at least, on his mind at that moment.

The phrase, I think, has lived on because it was such a courageous and succinct way of telling his captors that he was on the right side of science and history and they were wrong – even if someone invented those words for him. Galileo died at the age of 77 on Jan. 8, 1642, in his home in Arcetri, near Florence. He developed heart palpitations and a fever but little more is known about his final illness. Due to the reputational damage caused by his heresy trial, Galileo was buried in a tiny room of Basilica di Santa Croce, not far from the chapel for novices. He was moved to the main section of the basilica in 1737, but not before three of his fingers and a tooth were removed from his corpse and given pride of place in the Museo Galileo in Florence.

One of the digits taken from his right hand is now encased in glass – appropriately, it’s his middle finger.

Left: A drawing of Galileo with a diagram of planetary motions. Image via Getty Images