ATHENS, Tenn. — A Tennessee school district has voted to ban a Pulitzer Prize-winning graphic novel about the Holocaust due to “inappropriate language” and an illustration of a nude woman, according to minutes from a board meeting.

The McMinn County School Board decided Jan. 10 to remove “Maus” from its curriculum, news outlets reported.

Art Spiegelman won the Pulitzer Prize in 1992 for the work that tells the story of his Jewish parents living in 1940s Poland and depicts him interviewing his father about his experiences as a Holocaust survivor.

In an interview, Spiegelman told CNBC he was “baffled” by the school board’s decision and called the action “Orwellian.”

The decision comes as conservative officials across the country have increasingly tried to limit the type of books that children are exposed to, including books that address structural racism and LGBTQ issues. The Republican governors in South Carolina and Texas have called on superintendents to perform a systemic review of “inappropriate” materials in their states’ schools

The minutes from the school board meeting indicate objections over some of the language used in “Maus.” At first, Director of Schools Lee Parkison suggested redacting it “to get rid of the eight curse words and the picture of the woman that was objected to.” 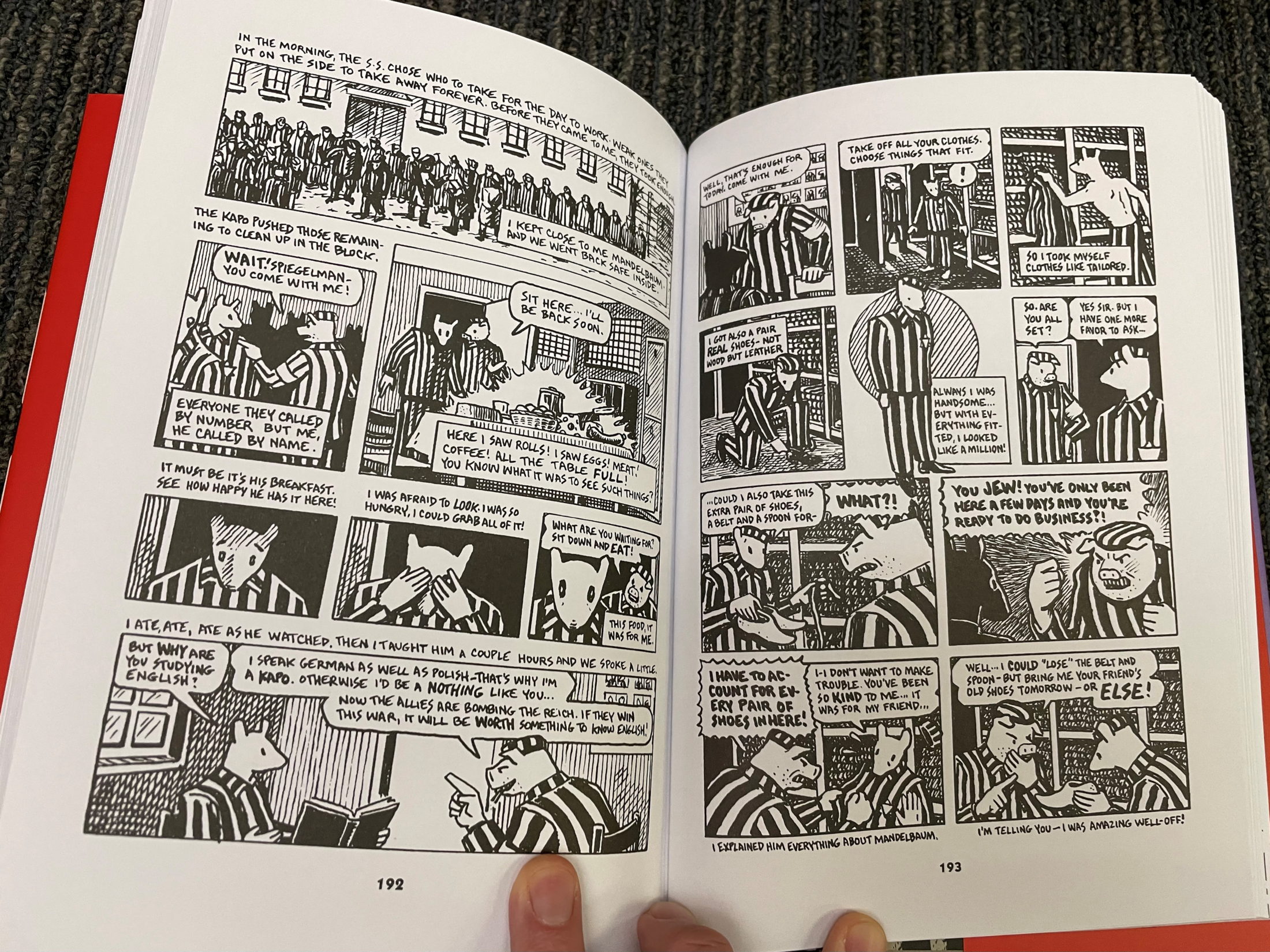 Pages from the graphic novel “Maus” by American cartoonist Art Spiegelman are pictured in this illustration. Photo by IlluMario Anzuoni/Reuters

“It shows people hanging, it shows them killing kids, why does the educational system promote this kind of stuff? It is not wise or healthy,” School Board Member Tony Allman said about the book, which was part of the district’s eighth-grade English language arts curriculum.

Instructional supervisor Julie Goodin, a former history teacher, said she thought the graphic novel was a good way to depict a horrific event.

“It’s hard for this generation, these kids don’t even know 9/11, they were not even born,” Goodin said. “Are the words objectionable? Yes, there is no one that thinks they aren’t. But by taking away the first part, it’s not changing the meaning of what he is trying to portray.”

Randi Weingarten, the president of the American Federation of Teachers, which does not play a role in McMinn County, noted the timing of the news on Twitter. Weingarten, who is Jewish, pointed out that Thursday is International Holocaust Remembrance Day.

“Yes it is uncomfortable to talk about genocide, but it is our history and educating about it helps us not repeat this horror,” Weingarten said.

The U.S. Holocaust Museum tweeted that “Maus has played a vital role in educating about the Holocaust through sharing detailed and personal experiences of victims and survivors.

“Teaching about the Holocaust using books like Maus can inspire students to think critically about the past and their own roles and responsibilities today.”

The Tennessee school board emphasized in the minutes that they did not object to teaching about the Holocaust but some were concerned the work was not age-appropriate.

Although they discussed redacting parts of the book, that led to copyright concerns and board members ultimately decided to look for an alternative book about the subject.

The book isn’t the only one banned recently amid critical race theory controversy.

Left: The cover of the graphic novel "Maus" by Art Spiegelman. A school board in Tennessee has added to a surge in book bans by conservatives with an order to remove the award-winning 1986 graphic novel on the Holocaust, "Maus," from local student libraries. Photo by Maro Siranosian/AFP via Getty Images