How global warming is permanently reshaping the Great Barrier Reef

Most thriving cities boast complex architecture — tall towers looming over narrow alleyways and plenty of nooks and crannies packed with life. Coral reefs are the cities of the undersea world, gradually constructed by the soft-bodied animals that build hard skeletons around themselves.

According to a new study in Nature, the Great Barrier Reef — the world’s largest coral system — experienced two widespread coral bleaching events in 2016 and 2017 that did more than just damage thousands of miles of corals.

The number of newly born corals landing on the reefs dropped 89 percent below average historical levels.

The bleaching and subsequent coral death, caused by unusually warm water, also impaired the reef’s ability to replenish and repair its architecture. The study found that afterward, the number of newly born corals landing on the reefs dropped 89 percent below average historical levels.

Moreover, these recent replacement baby corals weren’t the table-shaped or big branching species that provide the most “city” architecture. Even if the reef is someday covered in coral once again, the structure itself won’t be the same, with consequences for the reef’s biodiversity.

The Great Barrier Reef has rebounded from cyclones and smaller bleaching incidents before, the researchers said. It’s made up of some

“If we don’t control global warming, we’ll still have a tropical ecosystem but it won’t be dominated by corals,” said lead author Terry Hughes, a coral reef ecologist and the director of the ARC Centre of Excellence for Coral Reef Studies in Australia. (Reminder: Here’s how bleaching works.)

The challenge, Hughes said, will be to curtail human carbon emissions to keep the water temperatures down and secure a future for the reef, which harbors a brilliant treasure trove of species, supports 64,000 jobs in Australia and produces more than $6 billion in tourism and fishing annually.

In 1995, over the course of three days prior to the annual coral spawning event in November, five teams of scientists deployed hundreds of unglazed clay tiles across an area nearly the size of Italy. The tiles were meant to catch the remnants of a reef-wide reproductive frenzy.

Corals perform two major types of sexual reproduction: brooding and spawning. Brooding corals fertilize their larvae internally and release babies that are ready to settle down somewhere nearby and start their lives within 24 hours.

Spawning corals often travel from one reef to another, helping tie the separated chunks of the Great Barrier Reef into one enormous living system.

Spawning corals, on the other hand, release sperm and eggs into the water to fertilize on their own. Those more vulnerable coral larvae are produced in much larger numbers, but take up to a week to settle down and spread over larger distances thanks to ocean currents. Spawning corals often travel from one reef to another, helping tie the separated chunks of the Great Barrier Reef into one enormous living system.

Eight weeks after the tiles were first set, the teams brought them back to the lab. Under a microscope, they counted and identified the new tiny coral colonies that had landed, separating brooders from spawners.

They repeated this process on a variety of reefs in 1997, 1998, 2004, 2015 and 2016. Over this time, the Great Barrier Reef experienced smaller coral bleaching events in select areas, namely in 1998, 2002 and 2006. During these events, most reefs recovered quickly and coral mortality was relatively low. They collected yet another set of tiles in January 2018 — after the mass mortality events that occured in 2016 and 2017.

What the researchers found

Historically, Hughes said, each tile had between 50 and 100 baby corals. “But when we retrieved them in January 2018, many of the panels had no recruits at all.”

In the bleached north, the new generation of corals looked bleak. The southernmost third of the Great Barrier Reef hadn’t experienced coral bleaching in 2016 or 2017, so the recruitment of new corals there did not decline.

Where there were baby corals to be found, most of the babies were the offspring of brooding corals. Brooders don’t spread their babies as far as spawners, cutting down on the interconnectivity of the reefs.

Most of the reef architecture on the Great Barrier Reef as we know it was created by spawners — the branching and table corals that grow like forests and create plenty of hiding places for animals. 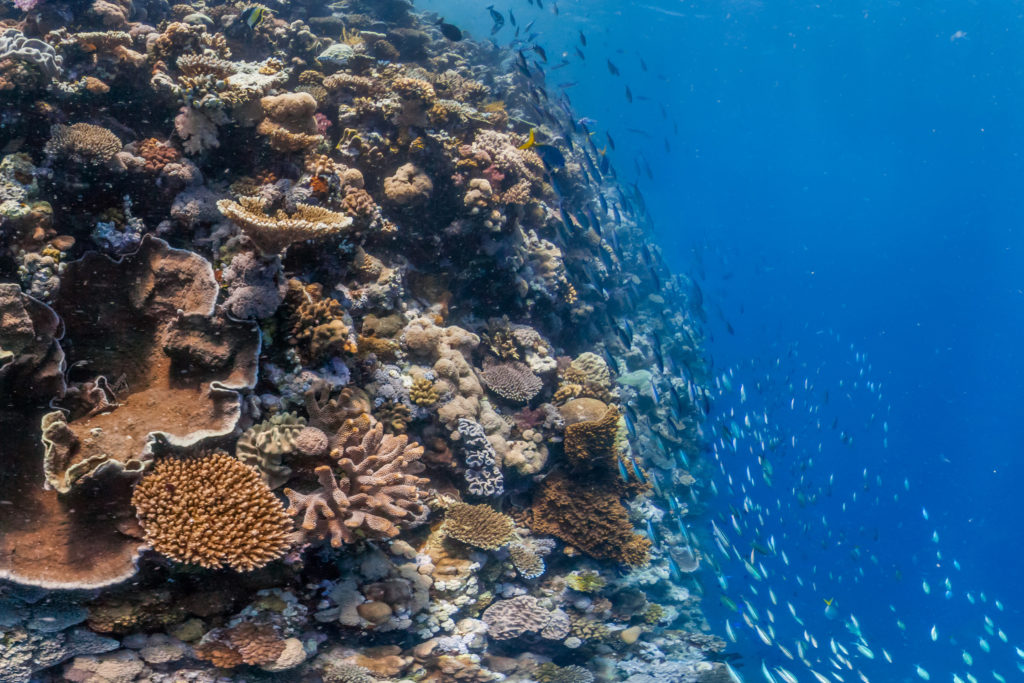 The Great Barrier Reef has historically been dominated by branching and table corals that build enormous structures for other animals to live on. In the future, Hughes said, the reef will be flatter and provide homes for fewer fish and invertebrates. Marine Photobank image courtesy of The Ocean Agency/XL Catlin Seaview Survey

“You can think of it like the number of people you can fit in the suburbs, versus the number of people who could live in downtown Los Angeles in [highrises],” said evolutionary ecologist Carly Kenkel of the University of Southern California, who was not involved in this study.

There is a host of problems facing coral reefs, Kenkel said. Pollution from shore or the sudden spread of coral-eating sea stars called crown-of-thorns could have also contributed to the decline in new corals in the northern Great Barrier Reef.

The new paper, Kenkel said, convinced her that bleaching — and global warming — caused this decline in baby corals. The timing and location of the bleaching events matched too closely with the researchers’ empty coral panels.

Can the corals recover?

It takes about 10 years for the fastest-growing corals to rebound, said Hughes. That’s assuming baby corals are contributing to the regrowth of a reef, and that the recovery doesn’t get interrupted by another bleaching event.

“So we’ve had two summers now with no bleaching,” Hughes said, “following two summers with extreme bleaching. But we need 10 of them in a row, and the chances of that happening are pretty slim.”

Because the Great Barrier Reef is so large and diverse, Kenkel said, “I had this naive hope that it could bounce back, because historically it has. It’s scary to think we’re facing losing this whole ecosystem in my lifetime.”