How Hurricane Florence could cause unprecedented damage to the Carolinas

Last year, Hurricane Harvey was remembered for its torrential rain across the Gulf Coast. Irma flooded South Florida with 6 to 10 feet of storm surge. And then Hurricane Maria’s thunderous winds knocked out most of Puerto Rico’s electric grid.

Hurricane Florence poses all of these threats at once, according to early forecasts, as the tropical cyclone marches toward the Carolinas. Florence intensified to a Category 4 storm on Monday, nearly doubling its wind speed from 75 to 130 miles per hour in a little over 24 hours. This tremendous strength arrived a day earlier than expected.

The National Hurricane Center said the storm will keep growing in size. As of Monday afternoon, tropical storm-force winds stretched out 140 miles from Florence’s powerful eye. This storm’s track is similar to that of Hurricane Hazel, a Category 4 storm that hit the Carolinas in 1954, killing 176 people and spreading about $3.5 billion in damage as far north as Toronto.

A week ago, no one expected Hurricane Florence to roll into the Southeast. Now, it may create storm surges higher than the houses along the coast. Here’s what you need to know. 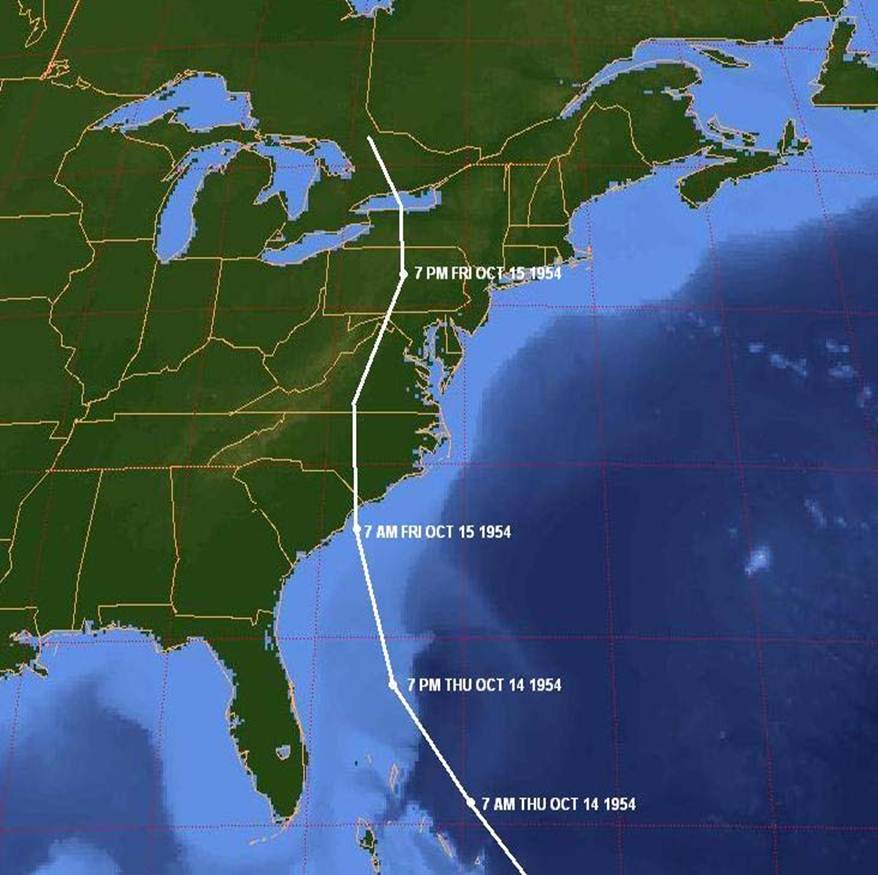 In the previous decade, a ridge of low-pressure air had typically steered hurricanes away from the continental U.S. This atmospheric blockade shifted westward last year, which left the eastern seaboard, Caribbean and Gulf of Mexico more vulnerable to tropical cyclones.

Hurricane Florence will slow down as it enters land, similar to what happened with Hurricane Harvey in Houston.

At the moment, this ridge has shifted west again. But this is not the main reason for Florence’s expected collision with the Carolinas.

Just more than a week ago, Florence was sitting in the middle of the North Atlantic, on a path that almost always pushes cyclones back out to sea.

“It was at 25 degrees north, and like 45 degrees west. If you were to look at all the previous storms that were 200 or 300 miles from where that storm was, none of them hit the U.S.,” Philip Klotzbach, an atmospheric scientist at Colorado State University, told the PBS NewsHour. “Normally …if you’re that far east, something picks it up and takes it north.”

But a strong ridge of high-pressure air is currently parked right outside of Maine, New Brunswick and Nova Scotia — otherwise known as the Atlantic Maritime. Winds from this high-pressure mass of air are swirling in a clockwise fashion over the northern Atlantic. As those winds headed south, they curled west and created a highway of air that pushed Hurricane Florence toward the U.S.

Late last Monday, Hurricane Florence encountered a batch of wind shear — a change in wind direction at high altitude — that should have weakened it to a tropical storm.

“If there’s a stronger wind let’s say 15,000 to 25,000 feet up in the sky versus closer to the ground, then the hurricane effectively gets torn apart,” said Sean Sublette, a meteorologist with Climate Central.

But Florence powered through this wind shear and headed into a batch of warm water, intensifying the storm.

“It’s in an environment of very warm water. It’s a couple degrees Fahrenheit warmer than normal in that part of the basin and there is no shear,” Klotzbach said. “So unfortunately, this environment looks to continue close to landfall.”

This environment could spell major trouble both for Coastal Carolina and inland areas of North Carolina and Virginia, as Florence may rank anywhere between a Category 3 and a low Category 5 storm when it makes landfall. (As a reminder, Hurricanes Harvey, Irma and Maria were all Category 4 storms when they made landfall on American soil.)

What to expect from Florence’s storm surge

Florence’s strength and the speed at which it passes over the Carolinas could be major factors when it comes to the storm’s flood-inducing storm surge.

If Florence hits as a Category 4, what we could see in terms of storm surge, flooding and the associated devastation could be unprecedented.

“We typically think about storm surge as the rise in the water level due to winds that is above and beyond what you normally experience during high and low tides,” said Rick Luettich, a coastal physical oceanographer at University of North Carolina Chapel Hill’s Institute of Marine Sciences.

Luettich and his colleagues at the University of Notre Dame and University of Texas have spent 30 years developing ADCIRC, a computer model that predicts storm surge and other impacts of major coastal weather events. The model — which takes wind speeds, water temperatures, geography, land surface cover and other factors into account — is routinely used for advanced planning and emergency response by agencies like Federal Emergency Management Agency (FEMA), the Coast Guard and Army Corps of Engineers.

How high water levels become during Florence ultimately depends on how strong the storm is when it makes landfall, exactly when it comes ashore and how long it takes to pass through the region. The longer the storm lingers on the shoreline, the more likely it is that the storm surge will coincide with high tide, leading to even higher water levels.

High tides in the Carolinas hit nearly every 12 and half hours. This week, one cycle will peak at 11 p.m. Wednesday, another at 11:30 a.m. Thursday and a third at midnight that evening. 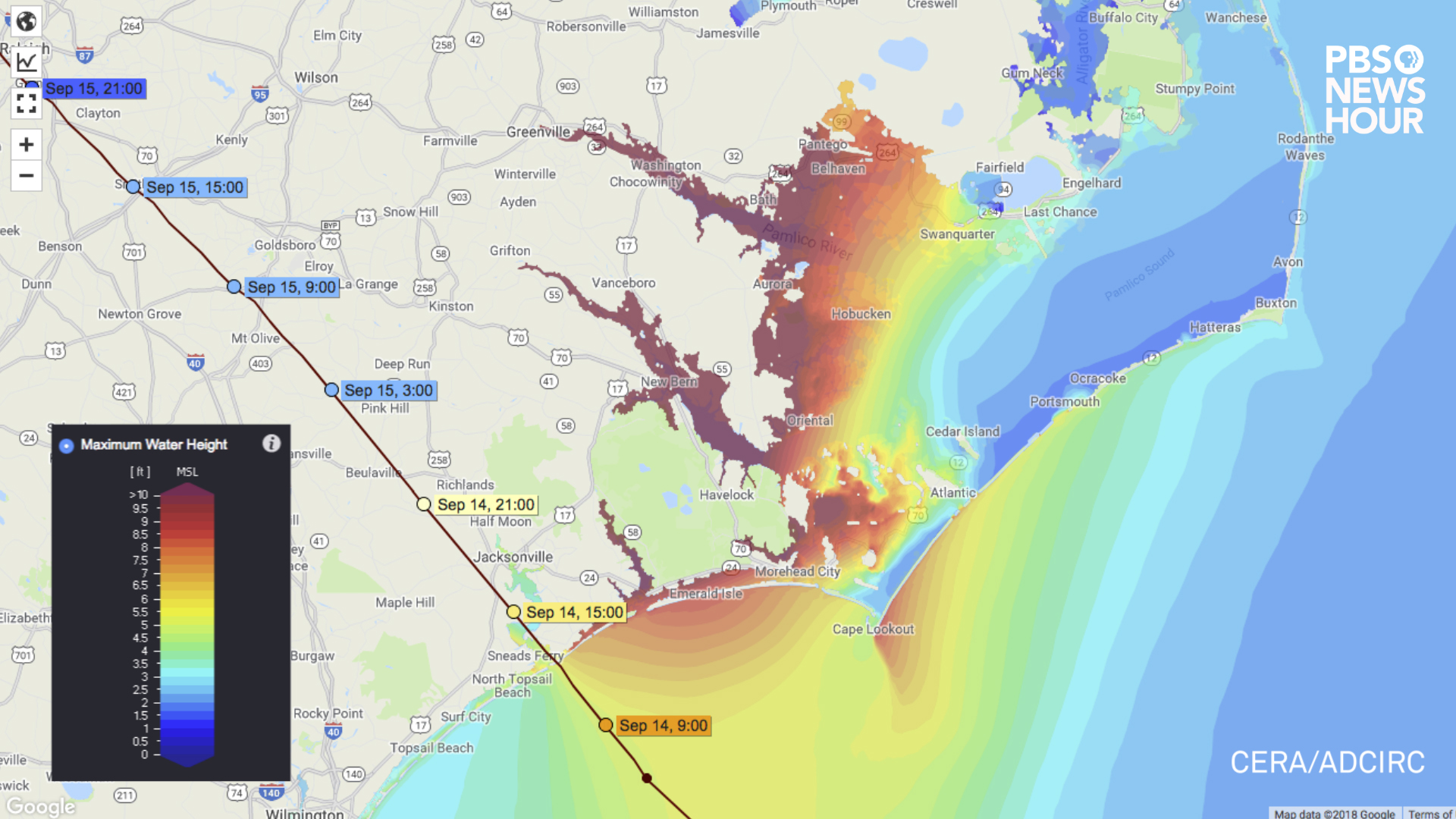 Maximum water heights caused by Hurricane Florence’s storm surge as predicted by the ADCIRC computer model. Projections as of 5:00am EST on September 11, 2018.

Should Florence hit as a Category 3, Luettich predicts a storm surge of 6 to 7 feet for a total water level 10 to 11 feet above normal at high tide. “That would probably be on the order of what Hurricane Fran was in 1996 in terms of its impacts, which were substantial,” he said. Fran ultimately killed 14 people in North Carolina and saddled the state with more than $2.4 billion in damages.

If the storm comes ashore as a Category 4, total water levels could be as high as 13 to 15 feet at high tide. Storms surges on that order have only been seen once before, during 1954’s deadly Hurricane Hazel, when records were less reliable.

Regardless, Luettich said, “this is a dangerous, dangerous storm. I’m encouraging everyone that’s remotely within the storm impact area, if they’re in low lying areas, to evacuate… If Florence hits as a Category 4, what we could see in terms of storm surge, flooding and the associated devastation could be unprecedented.”

Slowing down past the coast

Both Klotzbach and Sublette said Florence could strikes in two waves: first along the coast, and then along large rivers in North Carolina and Virginia, causing catastrophic flooding.

“One of the challenges in North Carolina and South Carolina is once you move inland, you get into elevated terrain,” Klotzbach said. “This topography can enhance rainfall rates,” as the storm pushes into the Piedmont and Appalachian Mountains.

Current predictions suggest Hurricane Florence will slow down as it enters land, similar to what happened with Hurricane Harvey in Houston. Klotzbach said the storm may not completely stall, but a slower pace could compound rainfall totals.

“The flooding is going to be a very big impact after the initial hit on the coastline,” Sublette said. “Many times, that message gets lost because of the focus on the run-up to where it is going to hit the coast,” he added.

Hurricane Florence is one of three cyclones in the Atlantic at the same time. This phenomenon has occurred in only 11 years on record, Klotzbach said. This uptick comes after what’s been a relatively quiet hurricane season, but it isn’t unprecedented.

“We like to remind people every year that the peak of the season is always September, even though the season starts in June,” Sublette said.

One thing behind the recent flurry in storm activity is the Madden-Julian Oscillation — a weather front of thunderstorms that are constantly traveling eastward across the globe every 30 to 60 days.

“Right now, it’s maximized over the Atlantic in such a way that’s really knocked the shear down,” Klotzbach said. “If you look at the forecast, after another week or so, this shear is going to come back up and probably the hurricane season will get a lot quieter again.”

Left: Top down look at Florence from the International Space Station on Sept. 10, 2018. Photo by NASA