How seeing a political logo can impair your understanding of facts

Social media can feel like a missed opportunity. Often, instead of allowing us to learn from the millions of people on the other side of the screen, these digital platforms lock in our personal beliefs. Liberal versus conservative. Christian versus Muslim. Patriots fans versus everyone else.

Merely seeing these political and social labels can cause you to reject facts that you would otherwise support, according to a study published Monday in the Proceedings of the National Academies of Science.

In the study, when hundreds of Democrats and Republicans were forced to engage in a social network, the presence of party logos — an elephant and a donkey — undermined their ability to collectively interpret climate change data from NASA. When political logos were removed, participants from both parties worked together to reach the same conclusion — that Arctic ice is melting over time.

To eliminate echo chambers and partisan rancor on social media, platforms need to limit the presentations of the most basic symbols that divide us, the research team said.

In 2013, the National Snow and Ice Data Center published a routine update about the size of Arctic ice that quickly became a viral controversy. Using NASA satellites, the center said it had recorded the sixth lowest amount of Arctic sea ice in history. But relative to the year prior — which had the least sea ice ever measured — 2013 measurements looked like an increase in frozen seawater.

“The trend showed a steep downward acceleration. Arctic sea ice was decreasing at an alarming rate,” said Damon Centola, a sociologist at the University of Pennsylvania’s Annenberg School for Communication. “What they were shocked to see was that when this information reached conservative pundits and the population as a whole, the data were actually interpreted as showing that Arctic sea ice was increasing.”

The Daily Mail and Fox News reported that Arctic sea ice had experienced “a whopping 60 percent increase” and 2013 had witnessed “global cooling.”

But if you look at the 30-year trend in Arctic ice reported at the time, there is a steady decline — which has continued through this year.

This graph was adapted from NASA’s 2013 public communications about climate change. The graph has been found to produce misinterpretations about the scientific information it communicates because its final data point indicates an increase in the amount of Artic Sea ice in the opposite direction of the overall trend that NASA intended to communicate. Image and caption by Guilbeault D, Becker J and Centola D, PNAS, 2018

Centola’s team wondered how social media had influenced these misinterpretations, so they recruited 2,400 people to join four custom-made social networks. In each of the networks, which were half Democrat and half Republican, the researchers presented a chart (pictured above) and asked the participants to sketch out a prediction for sea ice through 2025.

Three of the social networks allowed the participants to interact with each other by sharing their predictions. The networks varied in their levels of anonymity. One was completely anonymous, and none of the members could see the political affiliations of others; the second showed individuals’ political parties. The third network did not display individual party leanings, but an image of a donkey and an elephant — the logos for both parties — floated at the bottom of the screen.

In the fourth social network, a baseline group where the participants could not interact at all and instead relied on their own interpretations, Republicans made an inaccurate forecast — that Arctic sea ice was increasing — 40 percent of the time. Democrats missed the mark less often, about 25 percent of the time.

But this contrast disappeared when Democrats and Republicans were allowed to work together in the social network without identifying their political affiliations.

Social learning was nonexistent in the network where people could view each other’s party leanings.

“By the end of this social interaction period, more than 85 percent of Republicans and Democrats agreed that Arctic sea ice was going down,” Centola said, meaning both parties improved their abilities to accurately interpret facts.

This social learning was nonexistent in the network where people could view each other’s party leanings. Republican and Democrats remained stuck in their relative positions, suggesting that partisanship gets in the way of collective intelligence.

This pattern held even for the social network that simply showed the party logos without individual allegiances. This finding suggests that simply seeing political imagery — such as the illustration at the top of this article — can warp a person’s mindset and drive them away from accepting facts, Centola said.

In one social network, users saw how their peers answered the question about Arctic ice change, and their political identities were hidden. However, the presence of political party logos was enough to breed factual misinterpretations. Image by Guilbeault D, Becker J and Centola D, PNAS, 2018

There’s a name for the behavioral pattern observed among participants who saw the logos — priming — and it is common among political and social discourse. Research shows that priming with small partisan cues, whether they involve politics, race or economics, can sway the opinions of people. These knee-jerk decisions happen even if you’re encountering an issue for the first time or have little time to react.

“When people are reminded of their partisan identity — when that is brought to the front of their minds – they think as partisans first and as ‘thoughtful people’ second.”

“When people are reminded of their partisan identity — when that is brought to the front of their minds – they think as partisans first and as ‘thoughtful people’ second,” Dannagal Young, a communications psychologist at the University of Delaware, told the PBS NewsHour via email.

Young said this happens because logos prompt our minds to change how they process our goals. When reminded of our partisan identity, we promote ideas that our consistent with our attitudes and social beliefs in a bid to seem like good members of the group — in this case, Democrat or Republican.

Like teenagers at a digital school lunch table, we emphasize our most extreme opinions and place less weight on facts. When partisan cues are stripped away, people made considerations based on objective accuracy, rather than choosing goals by beliefs or peer pressure.

Young said any online social network — including the ones in the study — are conceptually distinct from the way humans exist in the world, but Centola’s experiments offer insights into how partisan cues can affect people’s attitudes and opinions in digital spaces. 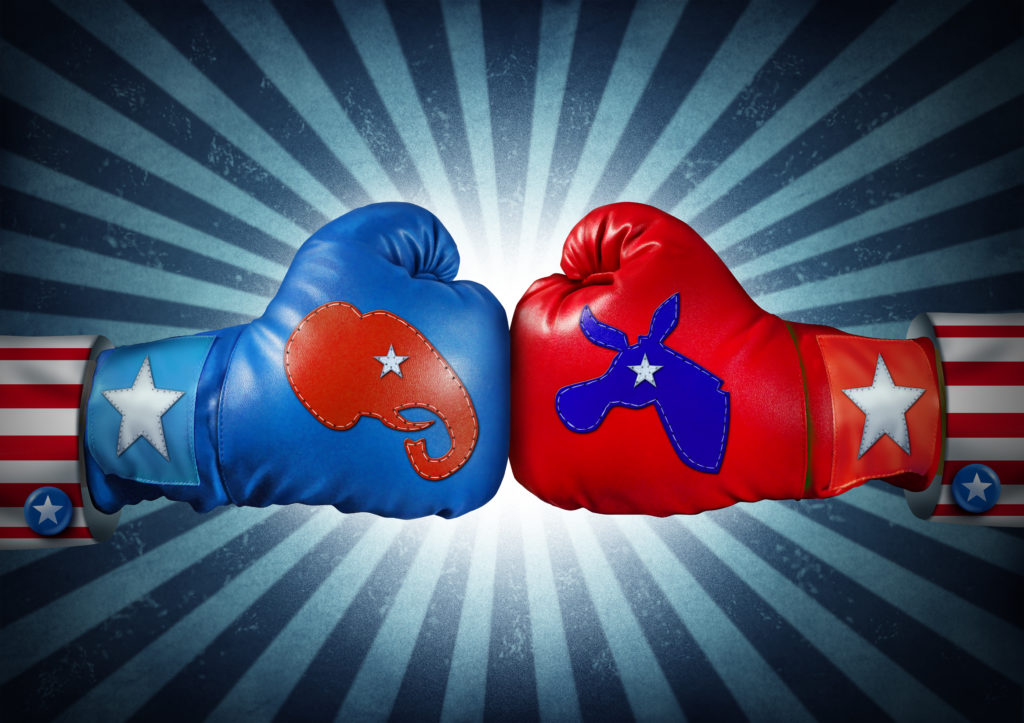 Having people on news shows talk about their views on climate change while also hinting at party allegiances could eliminate all of the social learning opportunities that could take place by virtue of this exchange, Centola said. Image by freshidea/via Adobe Stock

The study also offers clues for journalists reporting on partisan issues as well as for the designers of social networks like Facebook, which has pledged to reduce the damage caused by the spread of political news and propaganda on its platform.

“The biggest takeaway for me is that individuals and journalists seeking to overcome partisan biases need to drop the “Republicans say this and Democrats say that” language from their discussion of policy,” Young said. “These findings encourage journalists to cover policy in ways that are more about the substance of the issues rather than in terms of the personalized, dramatized political fights.”

Left: When hundreds of Democrats and Republicans were forced to engage in a social network, the presence of party logos — an elephant and a donkey — undermined their ability to collectively interpret facts. Removing partisan labels improved factual accuracy for members of both parties. Image by Hector Casanova/The Kansas City Star/MCT via Getty Images

How Facebook’s news feed can be fooled into spreading misinformation