A perfect cone shape, that vibrant green color, good needle retention — and no bare spots. If you’re in the Christmas tree business, like Virginia farmer Jim Gehlsen, you know what your customers are looking for.

Within the space of four weeks every spring, Gehlsen trims all 30,000 of his miniature pines and spruce trees by hand for the coming winter, because nobody else does it quite right, he said.

In the annual search for the perfect tree, people in the U.S. bring home more than 25 million of these festive holiday centerpieces each year, according to the National Christmas Tree Association. In 2017, total sales for harvested Christmas trees in the U.S. added up to more than $200 million.

But shapely evergreens don’t just grow straight out of the ground in top condition. Christmas tree farming is a year-round battle against fungal infections, insect attacks, erratic weather and climate change. Despite all these hazards, farmers cultivate Christmas-card-ready trees with careful attention to pests, timing and innovation.

A Christmas tree plantation is caterpillar heaven, with plenty of young needles and bark for them to gnaw on.

Bagworms — actually moths, though you hardly ever see one fluttering in the air — spend most of their lives as caterpillars inside cocoons spun from their own thread and the needles of the trees that surround them.

Without Gehlsen’s care, the bugs would “get so thick … that they’d kill the top half of a tree” by stripping the bark and killing the branches, he said.

After he’s done selling trees for the holiday, Gehlsen begins the new year by walking his rows of spruces and firs and removing as many bagworm eggs as possible. He returns to this task for a brief window in the summer when the newly hatched caterpillars are ravenous but vulnerable to chemical sprays. “You can only spray bagworms in June and expect to kill them.” 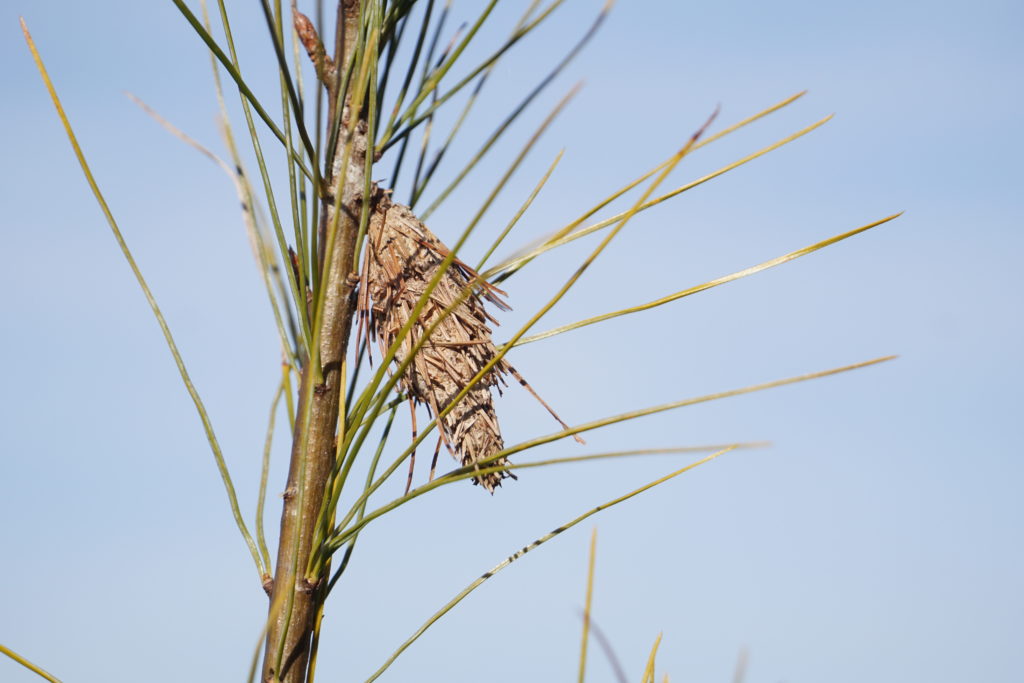 Bagworms are moths that live most of their lives in shelters that they build from silk and nearby vegetation. They can cause severe damage to new tree growth. Photo by Vicky Stein

The tiny invaders are just one of many tree-eating insect species. Dozens of types of weevils, midges and aphids make their appearances on farms across the country, depending on the tree species and the weather. They can travel on trucks hauling loads of trees or spread on the wind, finding new habitable territory where they land.

Christmas tree farms make for prime habitat for those parasites because the trees are so tightly packed together and of one consistent variety, said Chal Landgren, Oregon State University Extension’s Christmas tree specialist. It’s a great breeding ground for fungi, too, he added.

One in particular, a fungus called pine gall rust, killed or deformed more than 8,000 trees on Gehlsen’s farm over the past 15 years. He has stopped growing and selling scots pine, the species that the parasitic fungus attacks, planting more white pine and Norway spruce instead.

Success in tree farming is a moving target. Insect and fungus populations grow and shrink yearly. “Nobody is having much luck growing scots pine anymore,” Gehlsen said. “But 40 to 50 years ago it was the No. 1-selling tree.”

There are also “good bugs” that help farmers. Tree growers nationwide leave developing praying mantis eggs alone when they discover them in their fields each winter. 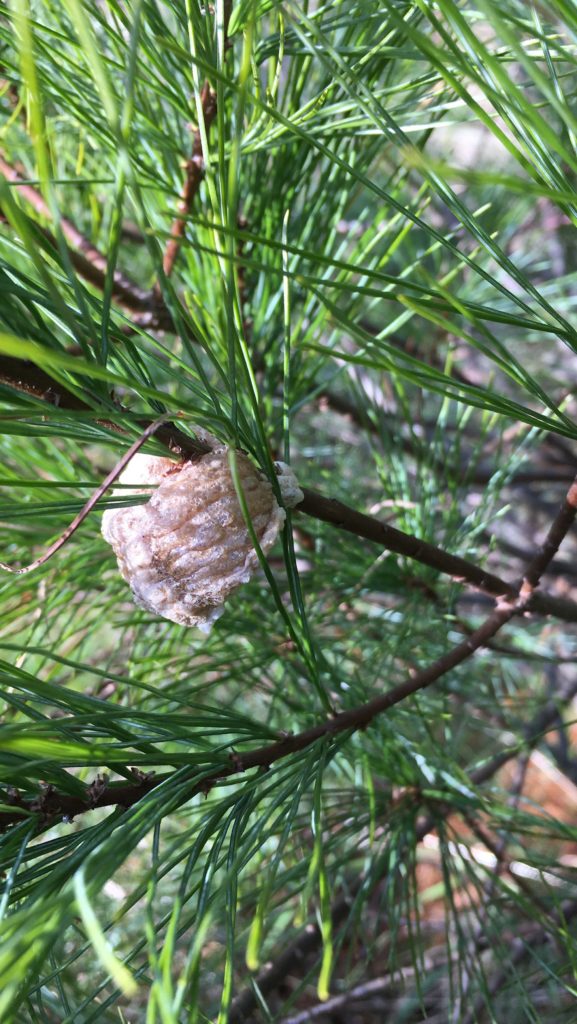 Praying mantis egg masses will hatch into dozens of tiny insect predators when they warm up, either indoors or in the coming spring. Farmers can use these insects as a first line of defense against tree-eating pests. Photo by Vicky Stein

Although one of the most common species of praying mantis is not native to the U.S., it can still provide valuable pest-control services, chowing down on aphids, midges and moths.

That is, if it’s allowed to hatch outdoors.

Much to the chagrin of some unsuspecting tree buyers, the egg masses can sometimes hide among the boughs and, when warmed up in your cozy house, result in a bumper crop of tiny predatory insects in your living room.

Abnormal weather is the new normal

“The mid-Atlantic area used to be pretty regular,” he recalled, and he depended on the predictable cycle. Trees used to start growing in early spring, but he said lately snows and cold temperatures have pushed late into the season. “The last couple of years, we’ve had most of our winter in March.”

Drought creates a cascade effect that throws trees and their defense against pests out of balance.

This year, a slow start to the growing season was followed by a summer of record rain, Gehlsen said. Some of his trees drowned in the water pooling at the lowest areas of his farm. “But it seems, nationwide, that the abnormal is starting to become the normal and that’s sad. Excessive rain, excessive drought, excessive heat, excessive everything.”

In Oregon, Landgren said, the last three summers have been so dry that most newly planted noble fir trees died.

Drought creates a cascade effect that throws trees and their defense against pests out of balance. Bark beetles usually only attack weakened trees, Landgren said, and far fewer of the trees are now able to muster up the water to create enough sap to push the beetles away.

“When the tree doesn’t have that ability to defend itself, the problem builds up,” Landgren said.

But less rain can also be a blessing. The drier weather means Oregon farmers have had fewer problems with fungus. “A lot of the foliage diseases like moist, wet springs and moist summers, so there’s a little bit of a trade-off,” Landgren said.

Just as Gehlsen is rethinking which tree species he plants in Virginia, growers in Oregon are making their own preparations for the future. In greenhouses and on hillsides, Oregon State University is tending to new kinds of Christmas trees—fir trees from the Mediterranean, which are resistant to root rot, local pests and the long dry summers that the West Coast is starting to expect.

“We enjoy that tree,” Landgren said of the variety he gets for his family every year, and which keeps its needles well. “But they’re a little harder to find.” At least for now.

Left: The tip of a pine tree grows tiny buds every winter. Those buds will become the tree's new set of branches in the coming year. Photo by Vicky Stein

Marshall Islands: A third of the nation has left for the U.S.