When these frogs move to cities, they change the way they flirt

The planet is becoming increasingly urban. As of 2007, more than half of the world’s human population lived in cities. Today, it’s almost 55 percent. As humans build and move into concrete jungles, other animals are joining them — and adjusting their behaviors along the way.

In a new study published Monday in Nature Ecology and Evolution, researchers in Panama City looked for changes in túngara frogs, inch-long amphibians known for their distinctive mating calls. They found that in the city, male calls were more elaborate and therefore more attractive to the female frogs — basically, city frogs could be described as sexier to potential mates. When placed back in the forest, city frogs reverted to less-showy songs, possibly because of the proximity of rural predators and parasites.

Frogs aren’t the only animals to change their behavior between urban and more rural environments. Urban coyotes look both ways before crossing the street, and anecdotes claim that crows have learned to use car tires to crack nuts. Some species of plants have altered the way they spread their seeds to increase their chances of sprouting amid asphalt and tall buildings.

As humans change more of the planet to meet our needs, many species will be threatened with extinction. This study shows some of the more subtle ways that other species like the túngara frogs, are affected by the changes, too.

What the researchers found

All male túngara frogs make mating calls while soaking in muddy puddles. The frogs inflate their bodies, floating on an inch or two of water to make a distinctive “whine and series of chucks,” said Wouter Halfwerk, an evolutionary biologist from Vrije Universiteit Amsterdam and the Smithsonian Tropical Research Institute who worked on the study.

Túngara frogs are named for the calls that they make — the onomatopoeia of the name is meant to echo the whine and chuck that is familiar to many residents of Panama City and more broadly across Central America, the region the frogs call home. “They really appreciate the sound,” Halfwerk said without sarcasm.

By recording the frogs in 11 urban areas and 11 forested areas, the team found that city frogs add more “chucks” to their calls — three or four, compared to one or two from the forest frogs.

When the researchers played both city and forest calls out of speakers, females from the city and the forest chose to approach the city calls 75 percent of the time, corresponding with prior research that showed female preference for more elaborate calls.

The team speculates that the forest frogs avoid making those more attractive calls for two reasons: predatory bats and parasitic midges. Previous research found that, just like female túngara frogs, both bats and midges are attracted to the male calls — the more chucks, the better.

In the dark forest, a frog putting too much time and energy into his calls might be snatched up in the teeth of a fringe-nosed bat — a quick execution. 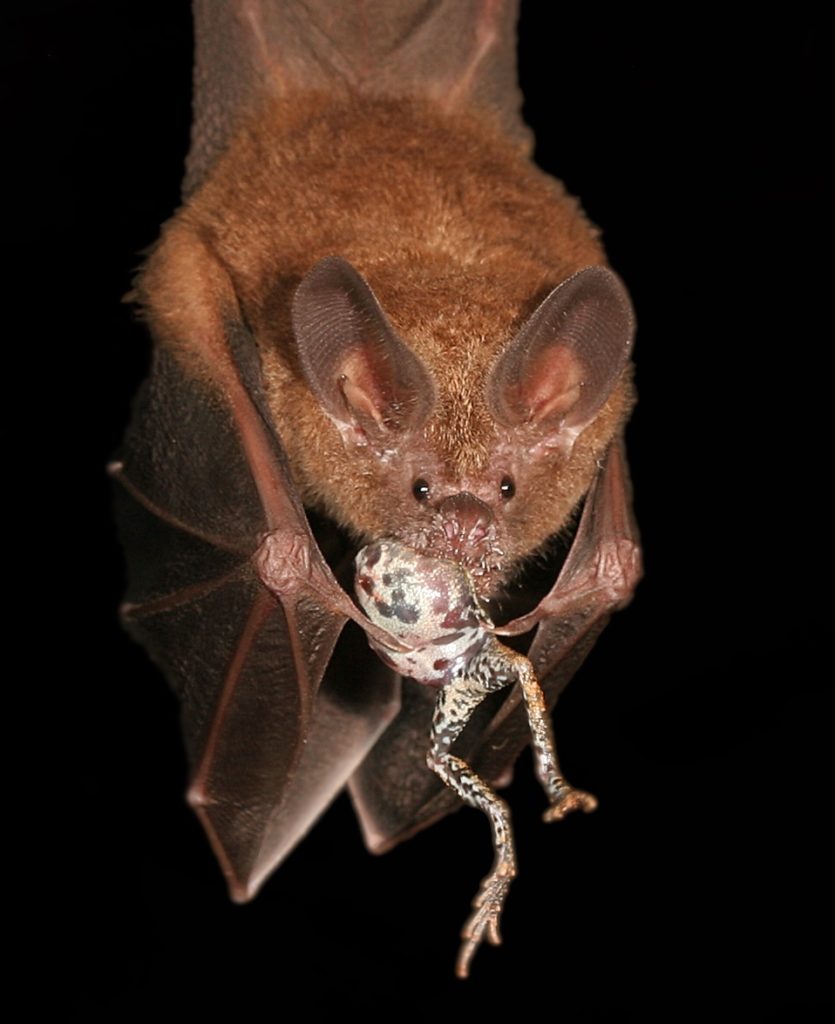 Fringe-nosed bats that feed on túngara frogs are attracted to the frog calls, but don’t like to venture into the city lights. Photo by Alex Baugh

Death by an infestation of midges is as terrible as it sounds.

The midges eavesdrop on the frog calls, possibly by picking up the sound vibrations through their antennae or through an ear-like structure recently discovered on the midges’ thorax.

Once they find a frog, the midges bite into the amphibians’ nostrils, feeding on their blood and occasionally transmitting mind-controlling parasites known as trypanosomes. The trypanosomes, Halfwerk said, seem to push male frogs into calling more frequently and at a higher pitch, making them less attractive to female frogs but more attractive to midges. The trypanosomes turn infected frogs into hubs for their own reproduction, implanting new midges with trypanosome offspring while the frog is slowly drained of its blood. 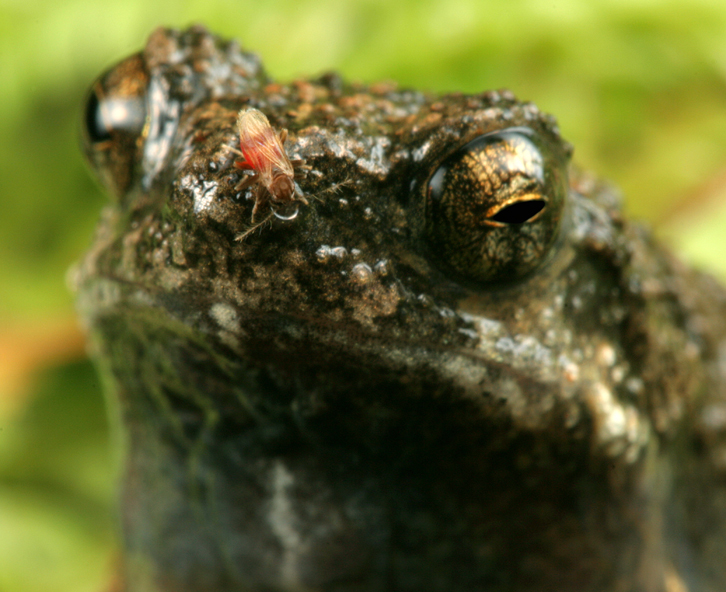 Parasitic midges feed on blood from túngara frogs’ nostrils, sometimes transmitting parasites. When there’s enough light, however, the tables are turned, and the frogs can feed on the midges instead. Photo by Alex Baugh

Neither bats nor midges like the city, however. An urban environment has become a “safe space for the frogs,” Halfwerk said. “When it’s light enough, instead of getting eaten by the midge, they can eat the midge.”

Another change also pushes the frogs toward more elaborate calls in the city: fewer companions. The researchers found fewer female frogs in the city, which meant that each male has to work even harder to attract a female’s attention.

This effect — the additional “chucks” in an urban frog’s call — disappeared when researchers brought a group of city frogs out to the forest. But forest frogs didn’t show the same kind of flexibility, sticking with their shorter calls when transferred to the city.

“It’s very clear that the urban environment has affected the male frogs’ behavior,” said H. Carl Gerhardt, a biologist studying animal communication at the University of Missouri, who was not involved in this study. “Urban animals are adapting to really different conditions, and they’ve made a beautiful demonstration of that.”

While the mainstream story around urbanization usually touts extinction, Halfwerk said, some urban environments can host a large number of diverse species. It will be important to understand what we’re doing to the communities of species that grow to accommodate human habitats, Halfwerk said — in this case, the frogs may benefit from associating with streetlights and roadside ditches, while the bats and midges certainly won’t.

Left: Male túngara frogs make a distinctive call for mates, inflating their bodies in small puddles. But those calls change dramatically when the forest frogs move into the city, a new study reports. Photo by Adam Dunn

Brexit may divert power from these ocean energy advances