How to teach a honeybee to do math

When most people picture math lessons, they imagine pencils, paper and desks, not sugar-water rewards and tiny mazes. But one group of cognitive scientists isn’t teaching arithmetic or calculus to high school students. They’re training bees to perform simple addition and subtraction.

Despite their “miniature brains,” the insects harness both long-term rules and short-term working memory in order to solve math problems and find a sugar-water reward. That’s according to a new study from a team led by cognitive scientist Scarlett Howard of RMIT University, published Feb. 6 in Science Advances.

Going back just a few decades, scientists believed “it was just humans and maybe a few primates that might have the capacity to process numbers in a more complex way,” said Adrian Dyer, a vision scientist from RMIT University in Melbourne, Australia, who was the senior author of the study and Howard’s Ph.D. adviser on the project. More recent developments have shown that a very intelligent bird can solve these kinds of problems, while another study found evidence of counting ability in spiders.

Now, Dyer said, it seems that a surprisingly wide range of animals might have the potential to develop these skills.

Humans have kept, cared for and benefited from Western honeybees, also known as Apis mellifera, for

Honeybees possess fewer than a million neurons — in comparison, humans have closer to 100 billion — and yet they’ve been known to learn some surprisingly complicated behaviors. Karl von Frisch earned a Nobel prize studying the bee’s ability to communicate the location of food and other resources to companions through dance. More recent research has looked into bees’ sophisticated collective decision-making. Bees can even recognize individual human faces.

Working with any animal is difficult, Dyer said, but bees have an unusual motivation. A foraging bee collects food not for herself, but for the entire hive.

So for the experiment, the scientists lured individual bees with sugar water.

“She flies back to the hive, gives it to the other bees, and two minutes later she’ll come back and do it again,” Dyer said. They could test the same individual for six to eight hours straight in a single day. 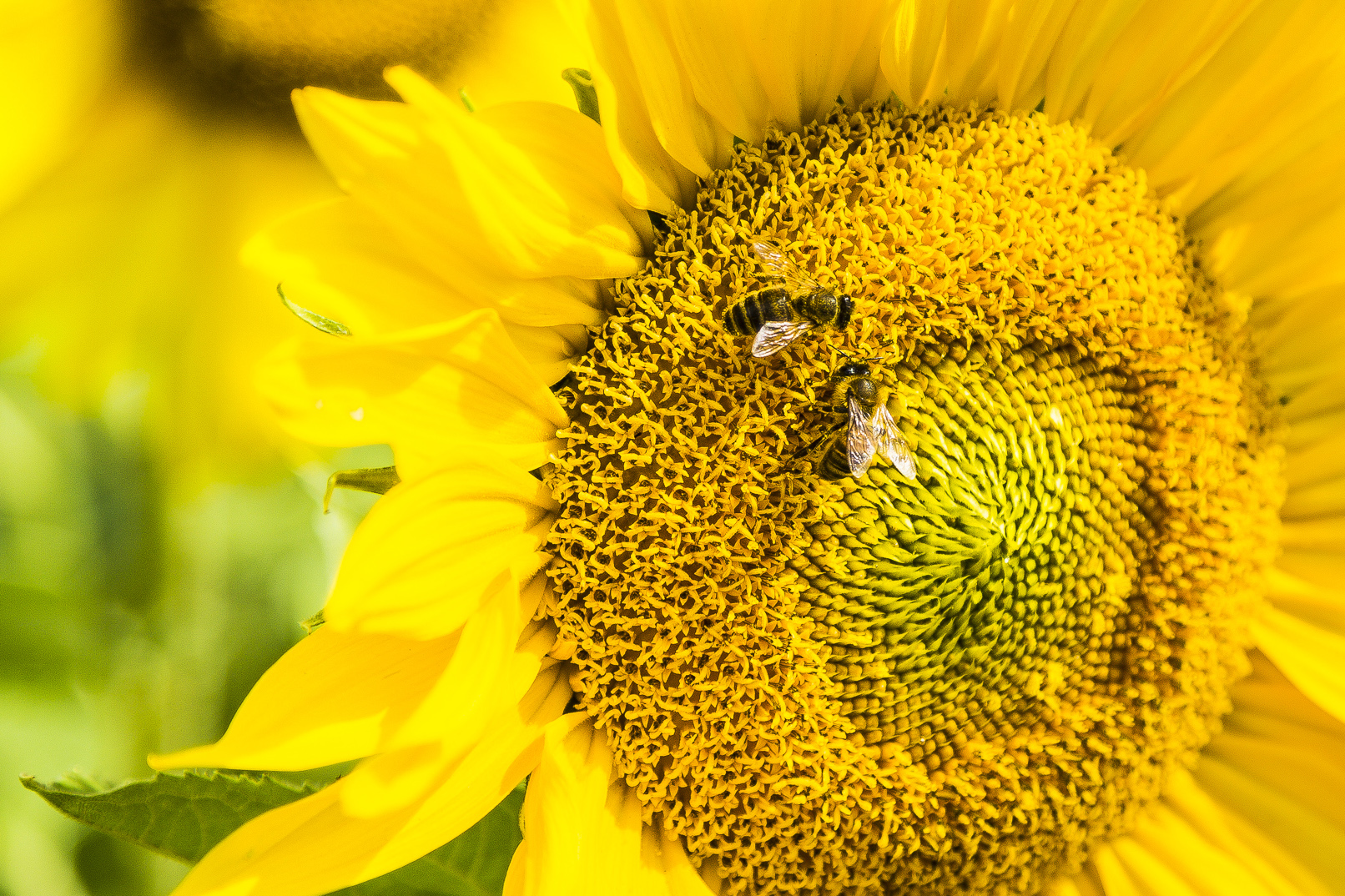 Honeybees forage for nectar, visiting hundreds of flowers a day to provide food for their entire colonies. That makes them ideal study subjects, according to researchers. Image courtesy of RMIT University

The researchers, who included scientists at the Université de Toulouse in France, taught and tested 14 bees over the course of the experiment — one bee at a time.

To learn the rules, a bee first would be shown cards printed with a number of shapes in one of two colors: blue, if they were supposed to add one to the shapes on the card, or yellow, if they were meant to subtract one shape.

Then, the bee would choose an answer to the problem by flying to one of two presented solutions. If it chose well, it found itself near a solution of delicious sugar water. If it chose poorly, however, it would be “punished” with a bad-tasting drink of quinine — the same stuff that makes tonic water taste bitter.

There’s also a possibility that the bees were learning something other than math, said Felicity Muth, an animal cognition researcher who works at the University of Nevada and was not involved in this study. The insects could be following some rule in their behavior that humans can’t easily identify.

“But I think this study did a good job of controlling for a lot of the obvious rules,” Muth said. To eliminate the possibility of false positives or cheating, the scientists varied the shapes printed on the cards, changed up the math problems and cleaned the testing chambers between experiments, eliminating as much possibility for the bees to follow scent trails made by prior testees.

The researchers found that each bee picked the correct answer in both addition and subtraction trials about 70 percent of the time.

“There’s this baseline assumption that humans are very complex, and there’s a decreasing level of complexity going away from humans,” Muth said. But in fact, “complex cognition [like the math problems solved by bees] can be underpinned by relatively simple mechanisms.”

That doesn’t explain why bees might have evolved the ability to figure out math problems, though. While honeybees live complicated lives, visiting hundreds of flowers per day and traveling miles to reach favorite locations, “I don’t know the context in which they would need specifically to know ‘one more’ or ‘one less,’” Muth said.

One possibility is that bees didn’t evolve to do addition and subtraction — they just evolved to be smart enough to figure it out.

“In [human] evolutionary history,” Dyer said, “there’s no need for us to play high-level music, program computers or ride a surfboard. We’re just highly intelligent, and that has allowed us to survive in a whole heap of different environments.”

“One thing I take from the bees,” Dyer said, “[is] once you see that this very small animal with a brain less than a million neurons can learn a very complex task… wow, what can [humans] achieve?”