Why the northern and southern lights don’t always look identical

On a clear night, people near the poles of our planet might get to see a show: drapes of colorful light wafting across the sky. Now new research could explain why the show doesn’t look the same to everyone — and could also help protect important infrastructure.

In the north, the phenomenon is called the aurora borealis or the northern lights. In the Southern Hemisphere, it’s the aurora australis, or southern lights. The name is different and it turns out that the view from each pole can be different too. Even though the Earth’s magnetic field stretches symmetrically from the north to the south, recent satellite images of the entire planet showed mismatched auroras happening at the same time in the two hemispheres.

The discovery set off a flurry of space weather theories, and in a new study published Jan. 24 in the Journal of Geophysical Research: Space Physics, a team from Norway proposes a solution. They posit that our magnetic field is squeezed asymmetrically by solar winds approaching from an angle, twisting and displacing the northern and southern lights into different forms and locations.

The auroras become mirror images of each other once again after the solar winds, which are also magnetic, drape around the planet and flow away from the sun-facing side of Earth. This creates a “magnetotail.”

When this tail is shifted by solar winds, “suddenly this asymmetry is reduced,” said Margaret Kivelson, a space physicist and professor emerita of the University of California, Los Angeles who was not involved in this study.

This kind of work, Kivelson said, is one more step toward understanding plasma — a form of matter that makes up most of the universe and is found in our planet’s ionosphere, a layer of charged particles surrounding the Earth.

Magnetic disruptions can affect this plasma, and in turn can mess with satellites and astronauts in space, airplanes flying over the poles, and even electrical grids and pipelines on the ground. Studying plasma can also reveal how magnetic forces play across the cosmos.

From the Earth’s surface, these heavenly ribbons seem peaceful, but the auroras in the north and south are visual representations of the turmoil above.

Tens or even hundreds of miles high in the atmosphere, vast solar winds are blowing across the Earth’s magnetic shield or magnetosphere, exciting particles in the atmosphere and sparking that light. 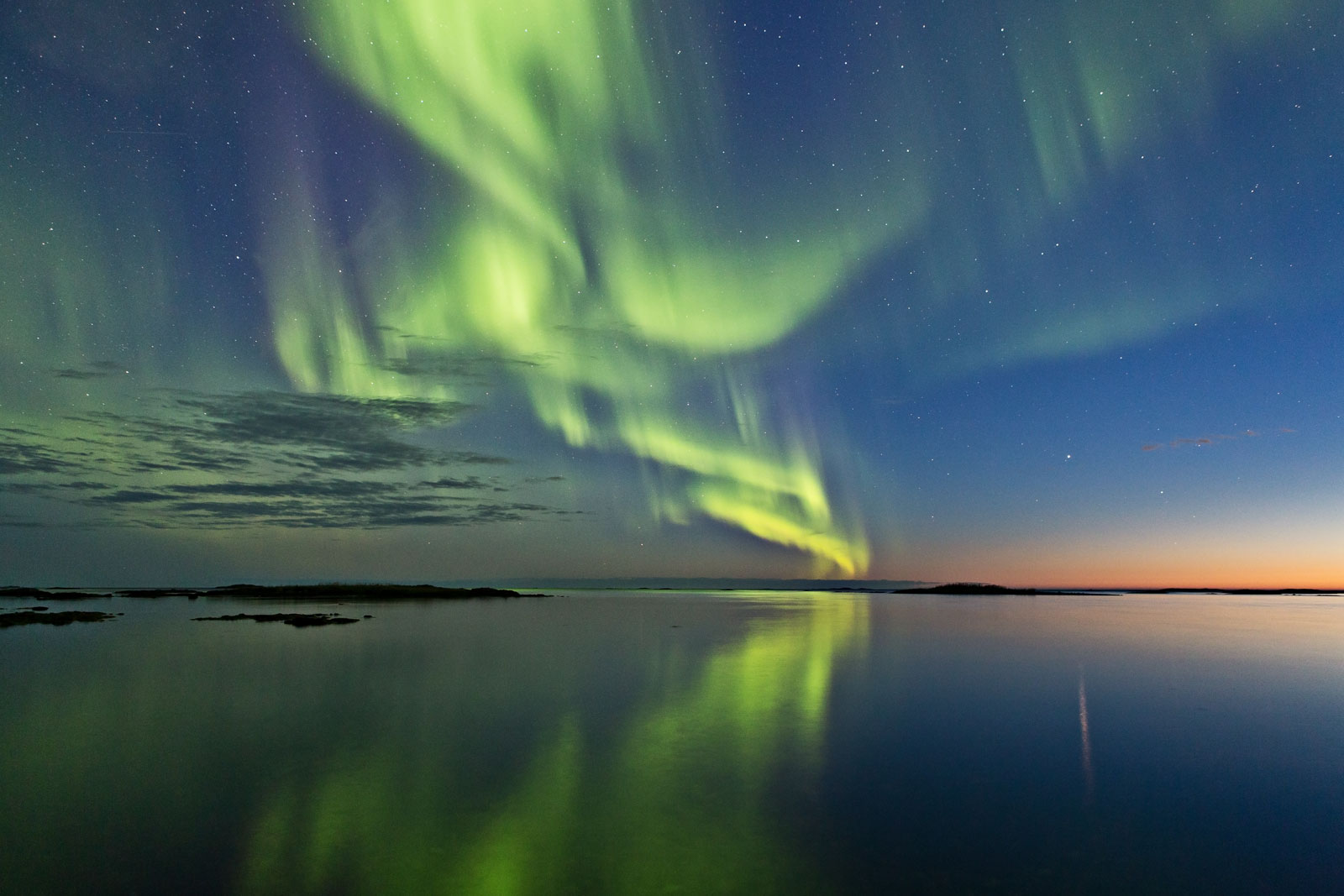 The northern and southern lights appear like drifting ribbons of light, but are actually the result of turmoil in the upper atmosphere. Image by Frank Olsen/Wikimedia

The researchers based their work on images of disturbances in Earth’s magnetosphere called “substorms” taken from 2001 to 2005 by two satellites. One of the satellites captured images of the Northern Hemisphere, and the other monitored the south.

The satellites were operated independently, so it was “sheer luck” that they had access to photos of auroras on both sides of the globe taken at the very same minute, according to Nikolai Østgaard, a space physicist who worked on the study and who is head of the Birkeland Centre for Space Science at the University of Bergen in Norway.

The researchers were looking for substorms caused by solar winds that had blown toward the Earth at a tilt.

Substorms happen several times per day, Østgaard said, and result in extra-bright auroras that spread across more area. And during substorms, the whole process creating symmetry repeats itself. 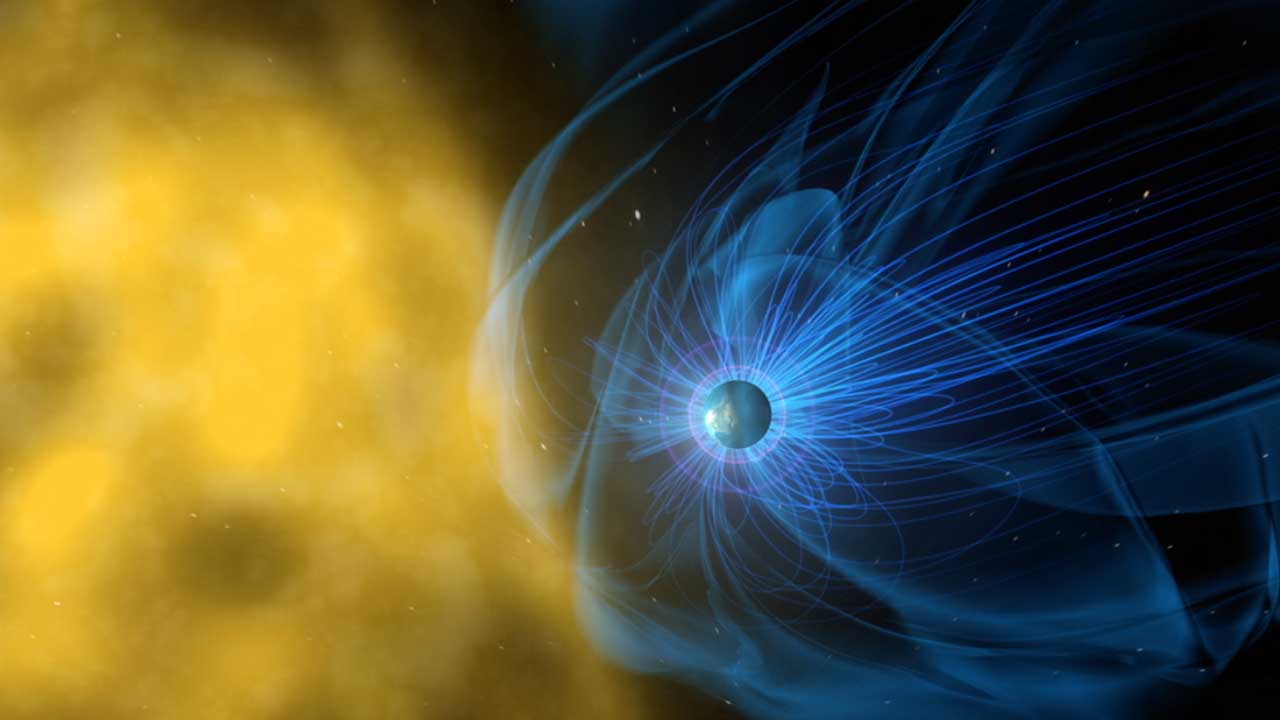 The Earth’s magnetosphere runs from the north to south pole, but solar winds can approach in different orientations. Image by NASA

“And that is important because it’s one of the most common states of the system. What we explain in this study is what the earth is experiencing most of the time,” Østgaard said.

They selected 10 substorms for a closer look, examining the Earth’s magnetotail along with the asymmetry between the northern and southern auroras during those 10 events.

You can think of a solar wind and its magnetic tug creating a cartoon raindrop. It peels away some of the Earth’s magnetic field and drags it from the sun-facing side of the planet to form the long magnetotail on the other side, Østgaard said.

The more dramatic angle of the solar wind, the more asymmetrical pressure builds up in the tip of the metaphorical raindrop. So as the solar winds’ bombardment of Earth shifts from perpendicular to more parallel with the poles, it forces the auroras to change shape or location, causing the asymmetry between the northern and southern lights.

But the symmetry can also be restored.

It’s in the magnetotail that the pressure is relieved through a process called tail reconnection. The magnetic field that belongs to the Earth disentangles itself from the solar wind and comes back to its original position. That’s what allows the “twist” in the Earth’s magnetic fields to straighten out, and the auroras to regain their symmetry.

“This is exactly the opposite of what people were thinking before,” Østgaard said. Researchers previously thought that the Earth’s twisted field re-joining itself in the magnetotail caused the aurora’s asymmetry, rather than working to resolve it. “That’s why this is kind of a big deal. It changes our understanding of cause and effect.”

For most people, this new knowledge isn’t going to be life-changing. But for those who manage some of our planet’s most advanced technology, understanding the auroras is vital.

“If you have intense auroras at some place, there will also be electric currents flowing” in the outer layer of the Earth’s atmosphere, Østgaard said. “And that will affect navigation and GPS.” 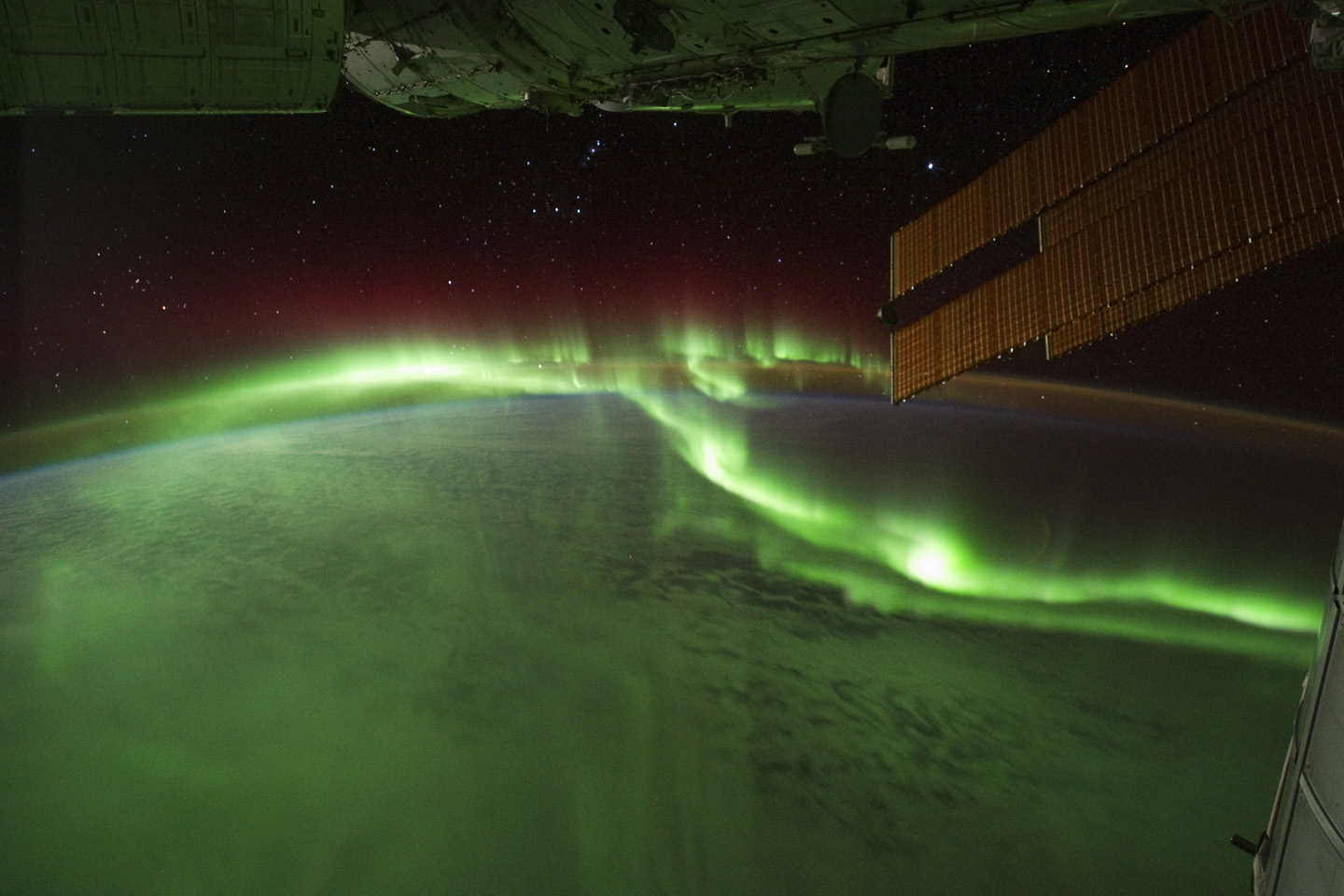 The aurora borealis and aurora australis can be seen from the International Space Station. Image by NASA

Those currents could even damage power transformers or oil pipelines, Kivelson added. Airplane flights scheduled to fly over the poles during active magnetic events could risk losing navigation and communication abilities, or expose passengers to dangerous radiation.

Just a few hundred years ago, space weather wouldn’t have mattered much to the people standing on the surface of the planet. “It affects a technological society,” Kivelson said.

For a society without satellites, electrical grids and high-altitude aircraft, the twists and turns of the magnetic fields hundreds of miles above would be little more than a glorious light show. And for most people on earth, it still is. In the north or in the south, the asymmetrical auroras shimmer on.

Left: Northern lights seen over Rovaniemi in Lapland, Finland, in 2018. Researchers discovered recently the northern and southern lights are not symmetrical, and now they think they know why. Image by REUTERS/Alexander Kuznetsov