Why Hurricane Harvey became so extreme

Hurricane Harvey is drowning southeastern Texas for the fourth day, putting a vast area under feet of water. Experts say Harvey has been stuck longer in one place than any tropical storm in memory. That is just one of the hurricane’s extremes; the storm is off the charts by many measures. Scientific American wanted to learn why, and we asked meteorologist Jeff Masters for help. Masters is the co-founder of Weather Underground, a web site that meteorologists nationwide go to for their own inside information about severe weather. Masters also wrote a fascinating article on why the jet stream is getting weird.

Harvey has dropped so much water over such a large area of southeastern Texas that the storm is pulling that water back up into itself and dumping it again as more rain.

Why did Hurricane Harvey so quickly explode from a Category 1 hurricane to Category 4?
Last Wednesday night, August 23, Harvey was a tropical depression, but after just eight overnight hours it was forming a hurricane eye wall. “That’s remarkably fast,” Masters said. On Friday it rapidly ballooned from a Category 1 hurricane to Category 4. That is because it happened to pass over a region of extremely warm ocean water called an eddy. This spot of hot water was 1 to 2 degrees Fahrenheit warmer than the Gulf of Mexico around it, which itself was already 1 to 2 degrees Fahrenheit higher than average, reaching 85 or 86 degrees Fahrenheit in places. The hotter the water, the more energy it drives into a storm. Hurricane Katrina, which destroyed New Orleans in 2005, also mushroomed to Category 4 in a similar fashion because it, too, passed over a hot eddy in the Gulf.

Why is Harvey so stuck in place over Texas?
Hurricanes are circular structures with winds that spiral counterclockwise, but they are steered by larger wind patterns in the greater atmosphere that push them in one direction. In Harvey’s case, a big high-pressure system over the southeastern U.S. is trying to push the storm in one direction, but a big high pressure system over the southwestern U.S. is trying to push the storm in the opposite direction. “The systems have equal strength and are cancelling each other out,” leaving Harvey stranded, Masters said. “It’s highly unusual to have two highs on either side of a hurricane of equal strength.” The only other time Masters recalls that happening to a huge storm system was Hurricane Mitch in 1998, which struck Central America and killed an estimated 7,000 people in Honduras.

WATCH: Why Houston is a ‘sitting duck’ for hurricanes

How can Harvey reverse direction, now, heading back out over the Gulf of Mexico from where it came?
The high pressure system in the southeastern U.S. is also trying to push Harvey west, but now the storm has bumped into the high pressure system in the southwestern U.S., which is pushing it back to the east. On any given day one of the systems might temporarily be winning this atmospheric ping-pong match. Masters said a low-pressure trough system has been setting up north of Harvey and might strengthen enough to start to pull the hurricane northward. National weather forecasts released Monday morning indicate that might happen later this week. 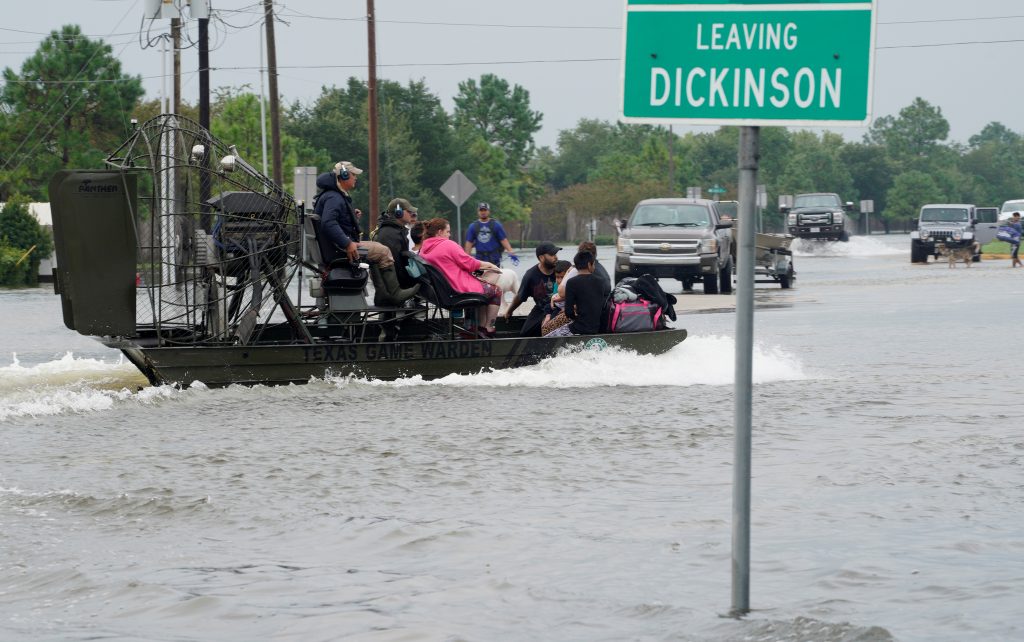 People are rescued by airboat as they evacuate from flood waters from Hurricane Harvey in Dickinson, Texas August 27, 2017. Photo by Rick Wilking/REUTERS

How can Harvey produce such extreme rainfall even though it is no longer over the ocean?
The answer to this is fascinating. Normally a hurricane pulls moisture up from the ocean and releases it as rain all around the storm’s area, particularly in the northeastern quadrant. But Harvey has dropped so much water over such a large area of southeastern Texas that the storm is pulling that water back up into itself and dumping it again as more rain. The flood area is so far and wide that it is acting like part of an ocean, feeding warm moisture up into Harvey. “You only need about 50 percent of the land to be covered with water for that to happen,” Masters said. “Obviously we have more than that in Texas.”

Could Harvey exist as a self-perpetuating rain machine over land?
Masters said meteorologists cannot answer this question yet. “If it were to stay perfectly still, could it maintain itself for a long period of time?” he asks. “That’s an interesting theoretical question. We just don’t know.”

Why did Harvey’s rain bands intensify at night rather than during the day?
This phenomenon is actually typical of large hurricanes: they weaken during the day and strengthen at night. “At night the upper atmosphere cools,” Masters explained. “That creates instability, which increases the updrafts in thunderstorms throughout the hurricane system. Those air currents pull more moisture up from the surface” of the ocean—or the flooded land.

Why has Harvey caused such deep coastal flooding even though the ocean storm surge was not so high?
This answer is also intriguing. Storm surge is often the deadliest aspect of tropical systems. Hurricane Katrina’s storm surge drowned New Orleans. Hurricane Sandy’s surge inundated New York City and New Jersey. Harvey’s storm surge was not nearly as high, yet water piled up along certain portions of the Texas coast. Masters said this is called “compound flooding.” With feet of rain, the rivers are so swollen that they are rushing toward the Gulf coast, but the storm surge is coming inland as those rivers try to flow seaward. The two surges meet at the coast “and the water piles up from both sides,” Masters said. The land’s shape and elevation at any location can make the compound flooding worse. In Galveston, for example, the sea surge was about three feet but the actual water surge was about nine feet.

This article is reproduced with permission from Scientific American. It was first published on Aug. 28, 2017. Find the original story here.