If this space study is right, humans have never left Earth’s atmosphere

The Earth’s atmosphere is described as a fragile coat wrapping around the planet, comparable in scale to an apple’s skin protecting the fruit. For more than half a century, even before the Apollo 16 mission captured the first ultraviolet images of Earth, researchers knew that the outermost atmospheric layer — the geocorona — extends far beyond the denser, surface-level air that we breathe.

Now, a new study from Space Physics redefines the boundaries of our planet, based on overlooked data collected at the end of the last millennium. The report concludes that the edges of the atmosphere actually extend more than 391,000 miles from the planet’s surface, about twice as far as our moon.

This doesn’t mean you can go moonwalking without a spacesuit, said Jean-Loup Bertaux, a study coauthor and planetologist. The hydrogen molecules that make up the outer atmosphere are so sparse that this region is still considered a vacuum. Any spacecraft traveling through it wouldn’t notice a thing or be slowed by drag.

It does mean, however, that humankind has yet to leave the Earth’s atmosphere. The moon, the farthest point ever reached by astronauts, orbits well within the geocorona.

All of this challenges the way we see our planet’s borders. NASA considers a space traveler to be an astronaut when they climb higher than 50 miles above the planet’s surface. The Fédération Aéronautique Internationale, which judges world records for aeronautic travel, uses the Kármán line — set at 100 kilometers above sea level — to denote the “edge of space.” 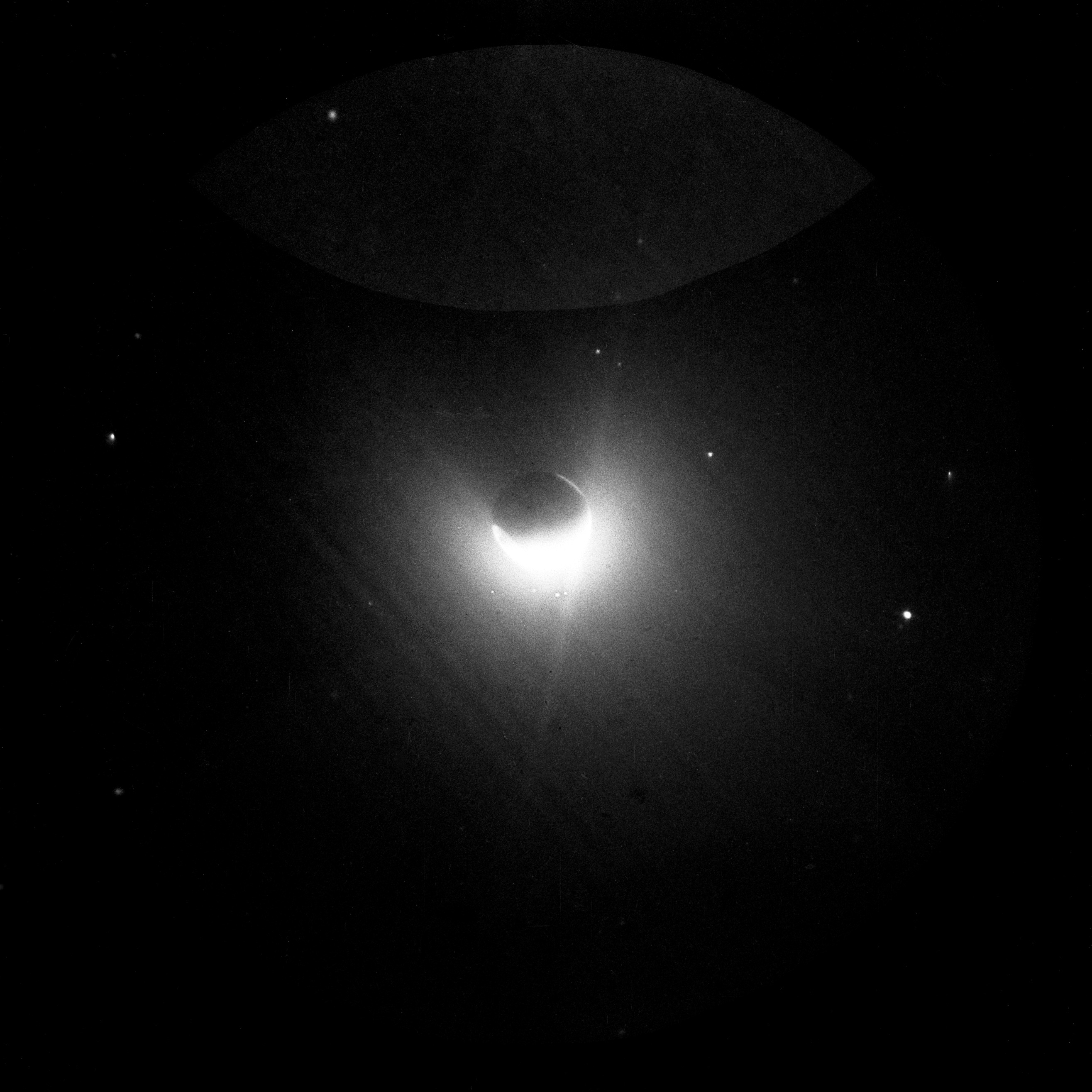 The first ultraviolet photos of the Earth’s geocorona were taken by Apollo 16 astronauts on the moon in 1972. Photo courtesy of NASA

With this new knowledge, high-powered telescopes on the moon or in Earth’s orbit will also need to account for — and filter out — the geocorona’s bright ultraviolet light when looking out into the universe. This would make it easier to scan the cosmos.

And if those telescopes spot planets out in the galaxy with the same halo that surrounds our Earth, that light could someday be used to locate habitable planets far from our own interstellar front door.

More than two decades ago, a spacecraft called SOHO — the Solar and Heliospheric Observatory — was suspended halfway between the Earth and the sun, searching the sky for a particular frequency of ultraviolet light known as Lyman-alpha radiation.

“Lyman-alpha is, basically, the color of hydrogen,” Bertaux said. It turns out that the solar system is awash in this color, given hydrogen is the most common element in the universe. As each atom of hydrogen is illuminated by the sun, it emits a Lyman-alpha glow.

Lyman-alpha lies in the far ultraviolet portion of the light spectrum, where human eyes can’t see it. But an instrument on the SOHO spacecraft called SWAN could, and did.

Back in the 1990s, Bertaux directed SWAN’s original and primary mission: to monitor solar wind, a constant barrage of charged particles flowing out of the sun. Bertaux is now at least nominally retired, but in his “free time,” his attention floats back to some of the long-overlooked, side-project data he collected in his 55-year career.

With Igor Baliukin, a physicist at Russia’s Space Research Institute and the study’s lead author, Bertaux delved back into images of the Earth taken by SWAN in 1996, 1997 and 1998.

Although the existence of the geocorona was well-known even in the early 1960s, according to Bertaux, experts at the time would have estimated that it ended well inside of the lunar orbit.

Bertaux, Baliukin and their team found the geocorona extends more than 50 times the Earth’s diameter away from the planet’s surface.

“When the astronauts were on the moon, they were looking back at the Earth,” Bertaux said, “but they were not thinking that they were indeed inside the atmosphere of the Earth.” 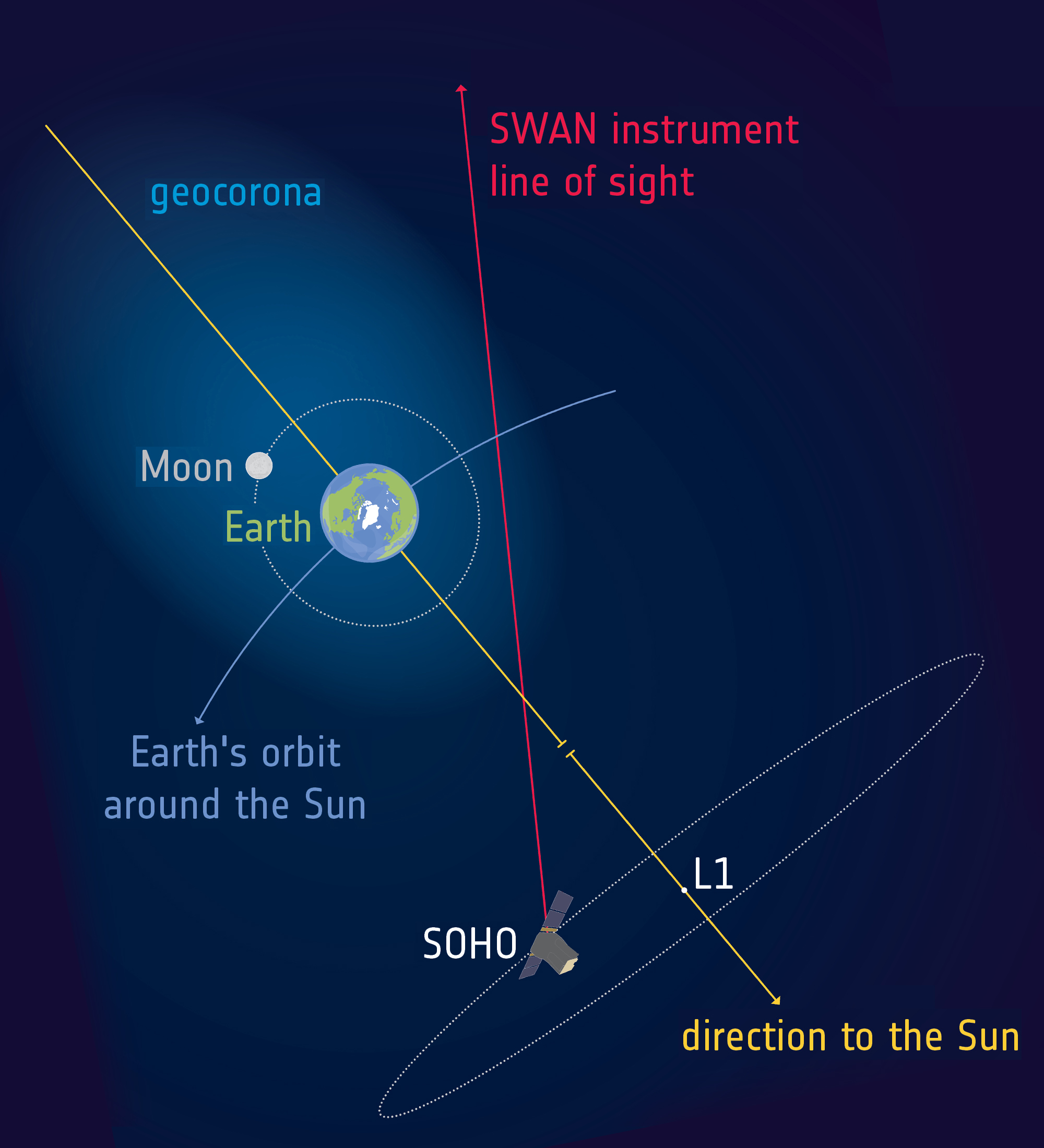 This not-to-scale diagram shows the Earth’s geocorona, the halo of hydrogen atoms that extends 50 times the diameter of our planet. On the sun-facing side of the planet, the geocorona is “pushed” by solar winds, creating an enlarged “tail” on the opposite side of the planet. Image courtesy of ESA, text enlarged by NewsHour

The team also knew, based on earlier observations of the geocorona, that photons in the solar wind push around the hydrogen in the outer atmosphere, meaning the geocorona must be asymmetrical between the Earth’s day and night sides.

Baliukin created a model of that asymmetrical effect — a “tail” on the geocorona that bulges out from the night side of the planet — that can expand our understanding of space weather. Space weather, in turn, can affect cellphones, GPS maps and electric infrastructure.

The Earth’s extended atmosphere isn’t much good for supporting life, but it does have consequences for our search for extraterrestrials, said Thomas J. Immel, a physicist at the University of California, Berkeley’s Space Sciences Laboratory who was not involved in this study.

“We’re more interested in the upper atmosphere of planets these days because of exoplanets,” Immel said.

There’s more to do here on Earth even as we reach out to observe planets around other stars.

Exoplanets orbit stars other than our own sun. Some of those exoplanets likely fall in the “habitable zone,” where liquid water might exist on a planet’s surface. The hydrogen in our atmosphere is the result of hydrogen atoms separating from water. If we’re looking for habitable planets out there in space, we might be looking for a geocorona just like ours.

“Thirty years ago, we knew there were 100 billion stars in the galaxy like our sun, but we did not know if there were any planets,” Bertaux explained. Today, one estimate lists nearly 4,000 confirmed and recorded exoplanets, with many more yet to be identified.

This research, Immel said, is “a reminder that we don’t know everything about our atmosphere. There’s more to do here on Earth even as we reach out to observe planets around other stars.”

The first image of the Earth’s geocorona was taken from the moon in 1972 by the astronauts of the Apollo 16 mission. The best information on our ultraviolet halo was collected in the late 1990s. Now in 2019, Bertaux, Baliukin and company gave us an estimate of the outermost reaches of our planet’s atmosphere.

Bertaux’s prediction for the future?

In the next 100 years, he said, “clearly we will have the means” to detect not only hydrogen around a habitable planet, but maybe even life among the stars.

Left: The famous Earthrise photograph captured by astronaut William Anders in 1968. These astronauts didn't know they were actually still inside of the Earth's geocorona. Image courtesy of NASA