In Louisiana, Journalists and Cleanup Crews Bake in the Heat 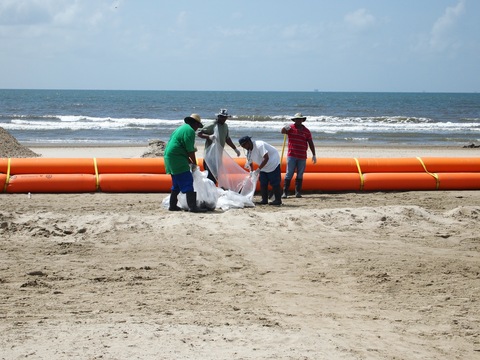 If you’re not used to it, the heat and humidity along the Gulf Coast can be devastating.

I’m not used to it, despite having made eight trips to the Gulf since April 28. I live in Colorado, where the humidity rarely gets above 60 percent. In Louisiana it seems to rarely dip below 80 percent, and is often much higher — or so it seems to me, I haven’t researched it. It’s just an impression.

It’s the kind of heat that smacks you in the face when you get off an airplane or go out the door of your hotel. Five minutes later you feel like you need another shower. Cameramen working down here wear towels draped around their necks to swab their faces every few minutes.

We visited the Coast Guard/BP operations center in Venice, La., on Tuesday. Safety regulations required us to wear hard hats. In the short walk from the gate to the dock, I could feel the sweat collecting under the hard hat’s plastic headband, and within a few minutes so much sweat poured off my face that my shirt looked like I had walked through a mild rain. And all I had to do was walk and talk. Cameraman Steve Mort had to shoot video. Within minutes his t-shirt was completely soaked through.

So imagine what it must be like to tote a shovel and walk down a beach picking up tar balls and puddles of oil while wearing a polyethylene Tyvek hazardous materials suit, your feet encased in rubber boots. One report said wearing one was like instantly raising the temperature 30 degrees.

Tuesday afternoon, we cruised down a long island beach aboard an airboat. Every couple of hundred yards there was a white gazebo-like tent: a shelter from the relentless sun for a small group of cleanup workers trudging around in “duck feet” — bright yellow pull-over boots that are sort of like ankle-high galoshes. There are so many tents that one has to wonder if BP has rented every one in existence.

Once ashore we saw what has become a familiar sight — people shoveling up the oil muck and putting it in plastic bags for eventual disposal in a landfill. Their shelter tent included something I hadn’t seen before — a generator-powered air cooler.

I looked up the temperature and humidity that day, and plugged it into the NOAA calculator grid for heat index — the “feels like” or “apparent temperature.” At 7:30 a.m., while we were at the command center, it was 106 degrees. By early afternoon on the beach, it was somewhere between 116 and 124 degrees.

Over the last few months some people have criticized the work ethic of the cleanup crews. There have been numerous reports that crews work for 15 minutes and then take 45 minutes off. Others say they work 20, off 20.

But under these conditions, it’s hard to begrudge anybody taking a break.

Find all of the NewsHour’s reporting on the oil spill, including Tom Bearden’s reporting from the Gulf, here.