The Squid and the Electric Current: Remembering the Work of a Brain Pioneer

In the late 1940s, Sir Andrew Huxley and Sir Alan Hodgkin teased a nerve cell from an Atlantic squid, placed it into a seawater bath and zapped it with currents. Then, with the data, they built a mathematical model that explained, for the first time, how electricity travels along nerves to control muscle movement and thought.

Many of the building blocks behind anesthesiology has its origins in the Nobel Prize-winning research these scientists did involving squids. Huxley’s death was announced this week, and as part of the NewsHour’s ongoing effort to shed some light on hugely important scientists and the role that they play, we take a look at his work. 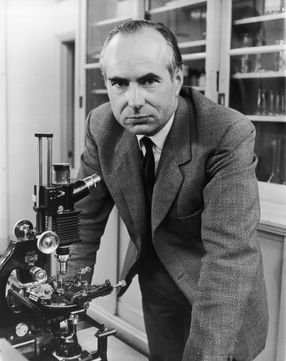 Almost all communication in our brain and spinal cord results from nerve impulses that allow electricity to travel the length of a nerve cell and then pulse from one cell to the next. At the time that Huxley and Hodgkin teamed up, there was debate over the mechanics of how this works: how nerve cells transmit electrical signals.

Some believed these signals relied on molecules that carried charged ions in and out of the cell membrane, said Daniel Gardner, professor of physiology and neuroscience at Weill Cornell Medical College. “What they discovered was this idea of a carrier molecule wouldn’t work.”

Huxley and Hodgkin instead proposed that electrical signals rely on special hinged gates – part of proteins that span the cell’s membrane – that open and close, allowing a cascade of charged ions to rush into and out of a cell.

They relied on a technique called a voltage clamp, which measured the pulse of current across a nerve cell membrane.

And they used the giant axon of the squid. An axon is a nerve fiber that extends from a neuron, carrying impulses from the body of the cell to other neurons or to muscles. The long, stringy squid axons can be as much as 1,000 times thicker than their human counterparts, making them ideal for study. The axon in the squid stretches along the length of its body, and is part of a neuron involved in the animal’s well-developed emergency escape behavior.

They dissected out the squid axon and inserted tiny silver wires, or micro electrodes, into its core to record the electrical current inside and outside of the nerves.

Huxley and Hodgkin’s data and equations showed that electricity itself opens and closes gates controlling the flow of charged ions across the nerve cell’s membrane, and when gates are open for a few milliseconds, sodium ions rush in and then potassium ions rush out of the cell, Gardner explained. Based on these findings, scientists then searched for the molecular mechanisms responsible for this gating and this flow, and found proteins with watery pores that span the membrane, allowing ions to flow. Parts of the proteins move tiny amounts when the voltage changes, opening and closing the gates.

“It’s a fundamental principle, the action potential, and understanding how it works is the basis for everything,” Levine said.

Their findings were published in five papers in the Journal of Physiology, London.

“They are physiologists, and they were trying to make sense of something,” Gardner said. “What they came up with was a series of equations. They can all be written down neatly on one page, and there are probably people who have memorized them completely.”

Huxley performed all of his calculations on a handheld calculator with a crank and derived a mathematical model for the process, which is now taught in every introductory neuroscience class.

“It was one of the few cases where we really understood something at a cellular basis and where mathematics predicted the physiology,” Gardner said.

Drugs used in anesthesiology, for example, shut off nerve cell activity by blocking the cell’s sodium ion channels. Ion channels also play a key role in the heart by inducing rhythmic activity. The research also provided insight into how neurons communicate with each other and has been key to learning and memory research.

Ragnar Granit of the Nobel Committee of Physiology and Medicine, who received the same prize in 1967, summed up the significance when he presented Huxley and Hodgkin, along with fellow scientist John Eccles, the Nobel Prize:

“By elucidating the nature of the … electrical events in the peripheral and central nervous system, you have brought understanding of nervous action to a level of clarity which your contemporaries did not expect to witness in their lifetime.”

Photo credit: Professor Andrew Huxley, seen here in October 1963, was awarded the Nobel Prize for Medicine for the research he had carried out on the human nervous system. Photo by Keystone/Getty Images.

Clarification: The text has been revised to clarify information about the nerve cell membrane and so-called “action potential.”