When Americans hear the word tornado, their minds may bolt to huge twisters rolling across northern Texas, Oklahoma, Nebraska and Kansas, like a scene out of “The Wizard of Oz.”

But the deadliest U.S tornado in six years didn’t strike the Great Plains — instead, it touched down Sunday hundreds of miles away in Alabama and Georgia. On Monday and Tuesday, search crews, aided by dogs and drones, sifted through wreckage caused by the violent tornado, which blew across 30 miles with winds reaching up to 170 miles per hour. So far, the storm has killed 23 people, including three children, and dozens remain missing.

While this weekend’s storms took the Southeast by surprise, the events fit into a growing trend for a region meteorologists now call Dixie Alley. Since the turn of the millennium, the Dixie Alley has witnessed an ever-increasing onslaught of tornadoes.

Rather than lie squarely in the Great Plains, America’s tornadoes appear to be sliding into the Midwest and Southeast.

“Whether this is climate change or not, what all the studies have shown is that this particular part of the U.S. has been having more tornado activity and more tornado outbreaks than it has had in decades before,” said Mike Tippett, a Columbia University applied mathematician who studies the climate.

Tippett is among a group of scientists trying to dissect why the South has become a hotbed for tornadoes and severe thunderstorms.

Some signs point to human-made climate change, but those conclusions are mixed at best. Weather and climate scientists have confidence, for instance, in the parallels between tornadoes creeping east and global warming — but are less convinced that climate change is increasing the number of tornadoes overall.

Most of all, their research highlights the barriers in forecasting that keep us from predicting where and when tornadoes might strike.

What happened with the latest tornado

The South was hit on Sunday by a supercell — a storm that doesn’t always have thunder and lightning, but is known for spinning winds called a mesocyclone.

A mesocyclone, much like a hurricane, swirls because warm air near the surface of the Earth is rushing upward and mixing with cold air floating high in the atmosphere.

In the case of southeast Alabama, the ingredients were an unusual bout of moist, warm ocean-lying air from the Gulf of Mexico, mingling with a rush of polar air from the West and Northwest.

That collision “led to a very unstable atmosphere and the development of a line of very intense thunderstorms during the early afternoon of Sunday,” said Dan Kottlowski, a senior meteorologist at AccuWeather. 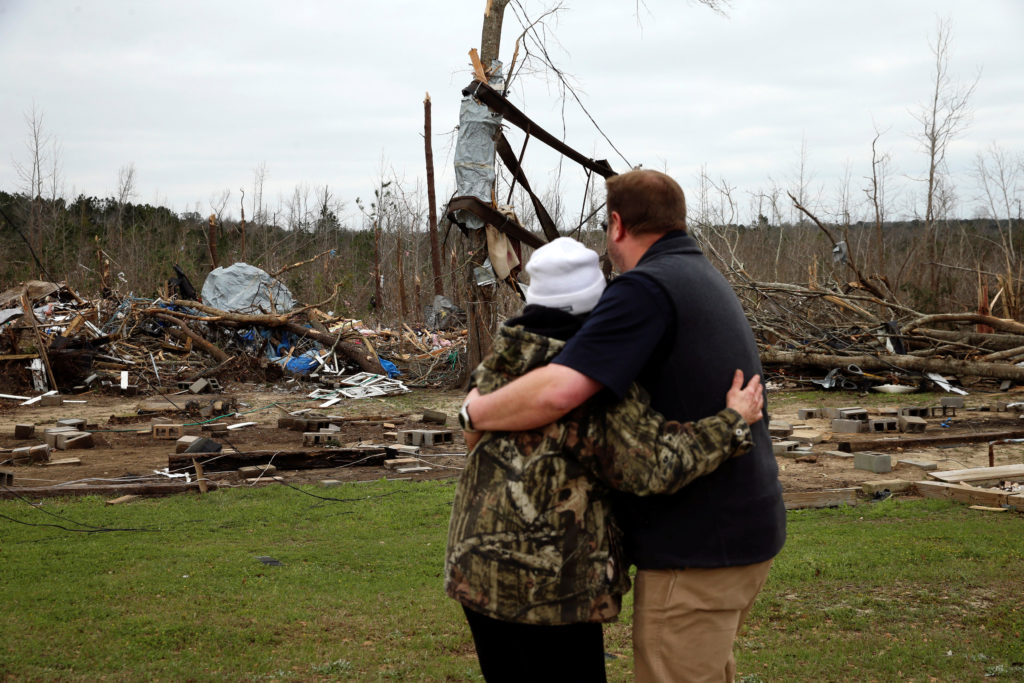 A man hugs Julie Morrison while looking at the remains of her home following a string of tornadoes that resulted in several fatalities in Beauregard, Alabama, U.S., March 4, 2019. Photo by REUTERS/Elijah Nouvelage

Historically, this weather pattern isn’t unusual for this time of year. March ushers in tornado season in the U.S.

As North America moves from winter to spring to summer, the conditions become primed for warm and cold fronts to smash into each other, and cause tornadoes.

But in recent springs, the Gulf of Mexico has been behaving abnormally, Kottlowski said.

“The water temperatures in the Gulf of Mexico have been running warmer than normal, not only overall during the last several years, but particularly during this time of the year — as we come out of winter into the springtime,” Kottlowski said. “When you have warm water, you’re creating a setup that is going to highly influence the development of violent weather across the South early in the season.”

Before Sunday, it had been nearly two years since a tornado of this magnitude — an EF-4 on the Enhanced Fujita scale — struck anywhere in the U.S., meaning warm waters and moist air can’t bear all the blame for Sunday’s storm.

More tornadoes are happening in Dixie, but is it climate change?

Despite their devastation, tornadoes are tiny in size, at least relative to other weather events. While droughts or hurricanes might span hundreds of miles, an EF-4 tornado like Sunday’s spans about half a mile.

“They happen in small areas, and they don’t last that long,” Tippett said. “It’s hard for us to use our scientific tools — whether they are physics models or other statistical tools — to have a good, clear idea of what’s going to happen.”

This limited resolution explains why weather forecasts cannot typically predict where a tornado will strike until 13 minutes before it hits — and that hampers climate change predictions too.

Scientists expect climate change to increase America’s propensity for warm moist air, which should mean more thunderstorms and tornadoes. As far as anyone knows, wind speeds should stay the same.

But tornado patterns are too small to explore deeply in the global computer models meant to simulate huge sections of the planet.

“There’s a lot of interest nowadays in how climate change is going to affect aspects of weather, especially extreme weather — whether it’s droughts, heat waves, floods or hurricanes,” Tippett said, adding that if you had to rank where the scientific research is certain or uncertain, tornadoes sit at the top of the uncertainty list.

Tippett compared the situation to having too few pixels in your cell phone camera and trying to take a photo of the Grand Canyon. Everything will come out fuzzy. You may recognize the huge gorge but good luck picking out your favorite boulder. 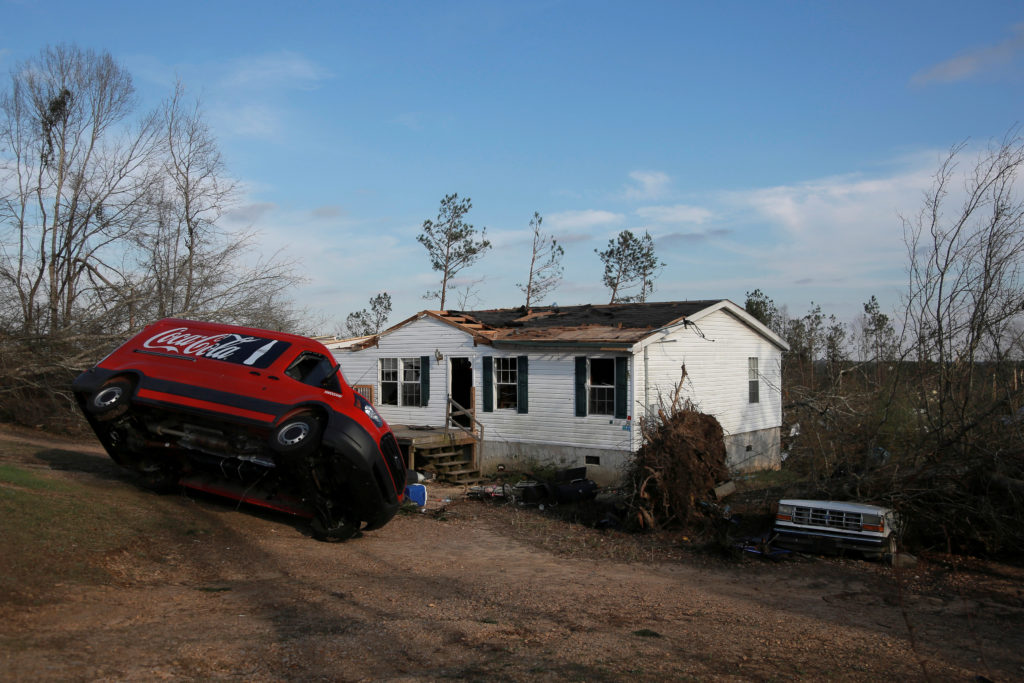 A Coca-Cola truck is seen tipped over on its side after two deadly back-to-back tornadoes, in Beauregard, Alabama, U.S., March 4, 2019. Photo by REUTERS/Elijah Nouvelage

So in the last five to six years, atmospheric scientists switched their approaches — rather than thinking globally, they’re looking locally.

“As an entire country, the United States hadn’t seen much change in the frequency of tornado events [since the 1970s,]” said Victor Gensini, an atmospheric scientist at the Northern Illinois University who studies extreme weather. But last October, his team reported a major geographical change.

After examining a giant repository of severe weather reports — collected by storm chasers, news outlets, emergency managers and the public — the team found a shift in the location of the nation’s so-called Tornado Alley.

Rather than lie squarely in the Great Plains, America’s tornadoes appear to be sliding into the Midwest and Southeast. This finding is worrying because it means severe weather and tornadoes are pushing into states and communities with higher densities of people — raising the chances of human casualties and property destruction. Gensini’s lab has also found hailstorms, another feature of convective storms like tornadoes, have increased across the nation — though this work is yet to be published.

“That doesn’t mean that Kansas, Oklahoma and Texas don’t get tornadoes. They still see a majority of the tornadoes every year,” Gensini said. It’s more [that] the trend in those locations is downward over the past 40 years and increasing in places further to the east.”

Tippett has discovered a similar increasing trend in tornado outbreaks — severe storms where multiple twisters emerge, one after another.

Given these tornado trends coincided with those of warming oceans, there might be a link to climate change — except no one knows for sure.

Solving this mystery is further complicated by other climate patterns. Two weeks ago, NOAA announced the arrival of El Niño, which according to Tippett’s lab, should stymie tornado formation in the U.S.

Sunday’s storm may also have been tied to the Madden-Julian Oscillation, a weather front of thunderstorms that are constantly traveling eastward across the globe every 30 to 60 days. The MJO is seen as a predictor of when extremely violent weather strikes the U.S.

Left: At least 23 people were killed when tornadoes moved across Alabama and Georgia on Sunday. This footage was captured by a truck driver in Georgia. Image by Keith Irwin via Storyful