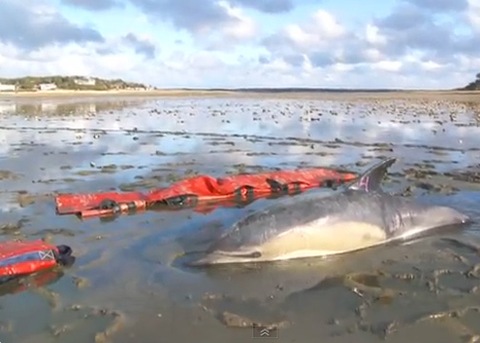 Nearly 180 dolphins have been found stranded this winter on the shores of Cape Cod. Image by the International Fund for Animal Welfare.

Last week, we posted a story on the unusually high number of dolphins that have been stranded off the Cape Cod coastline this winter: 179 have been recorded stranded, at least 108 of which have died. That’s more than half the strandings seen in an average year in just the last month.

Since the story was published, we’ve received several comments inquiring whether military exercises and sonar could be responsible for the surge in strandings. So we turned to some experts for an answer.

It’s true that naval sonar has been linked to marine mammal beachings in the past. In March 2000, 17 whales were stranded in the Bahamas following a U.S. Navy sonar exercise. Another incident involving sonar use in a 2002 international naval exercise left 14 beaked whales stranded on the Canary Islands.

But experts say it’s unlikely that sonar was a factor in the Cape Cod events.

Terrie Williams, director of the Marine Mammal Physiology Project at the University of California, Santa Cruz, studies the physiological effects of sound in the ocean on marine mammals. She says sonar can cause two types of injury in deep-diving animals, such as beaked whales.

Research has indicated that sounds in the water can disorient the animals, causing them to alter their swimming paths and engage in risky diving patterns. If a deep-diving mammal rises too rapidly, it can lead to a case of “the bends,” which involves nitrogen bubbles forming in the animal’s body tissue, Williams says. If the bubbles lodge in the wrong place, such as the brain or neural tissues, they can obstruct blood flow, leading to bone damage.

“When I’m looking at the effects of sound on stranded animals, I look for changes in heart rate, ear bone structure … and problems in the head,” Williams said. But the sound itself can also cause cracking or damage to the ear bones. So she also searches for signs of damage caused by acoustics.

Katie Moore, manager of the marine mammal rescue effort for the International Fund for Animal Welfare says she’s seen no evidence of any of these symptoms in the dolphins she and her team have tried to rescue.

Darlene Ketten of the Woods Hole Oceanographic Institution, who has been studying the stranded dolphins in her lab, agrees. Research is still ongoing, she says, but lab analyses show no indication of animals suffering from issues related to acoustics.

“We’ve seen multiple different causes of death from some of the animals,” Ketten said. “They’re generally healthy, and there’s not one single cause that we can pinpoint as of yet.”

Because of their speed and the depth at which they swim, common dolphins are rarely affected by sonar, Williams said: “They are very fast animals, and give the impression that they are fairly robust when it comes to sound.”

The United States Navy has operated one marine training exercise on the East Coast this year, according to U.S. Navy spokesman Lt. Matt Allen. The exercise, Operation Bold Alligator 12, occurred between Jan. 30 and Feb. 12 in and around the coasts of southern Virginia and North Carolina.

High frequency active sonar may have been used in this operation, Allen said. “This type of sonar is used for depth finding and mine location purposes, and is similar to fathometers, which are used by fisherman,” he said. “But it’s short range and has never been associated with marine mammal strandings.”

It couldn’t have affected these dolphin strandings because of the distance this sonar travels, Allen added. High frequency active sonar typically travels five nautical miles, and Cape Cod is hundreds of miles away.

Katie Moore elaborates on the subject in a post here. “The fact is we know there has been no naval sonar activity in our region within a proximity affecting the coast of Massachusetts and these particular animals,” she writes. “The acknowledged Mid-Atlantic activity is simply too far away to drive these dolphins to strand.”

Marine experts have been working feverishly on the scene and in labs to determine the possible causes. So far, they’ve arrived at few definitive answers. Moore, who has led the rescue effort on Cape Cod, speculates that changes in the greater Gulf of Maine ecosystem, including an unusually warm winter and movement of prey, as well as the hooked shape of Cape Cod are all possible contributing factors.

But as researchers are faced with increasing pressure to find a cause for the strandings, frustration is mounting on all ends.

Critics and concerned citizens have been sending emails and voice mails to IFAW, claiming that researchers and rescuers are not telling the truth, Moore said.

“All we can tell people is what we’ve found based on the tests we’ve run and the research we’re doing,” she said. “But there are some people who are not going to want to believe that. I can only tell you what we know and be honest about what we’ve found.”

But Moore says that she recognizes that it’s important for people to question what is happening in the water.