Universe is Expanding, But Not All of It 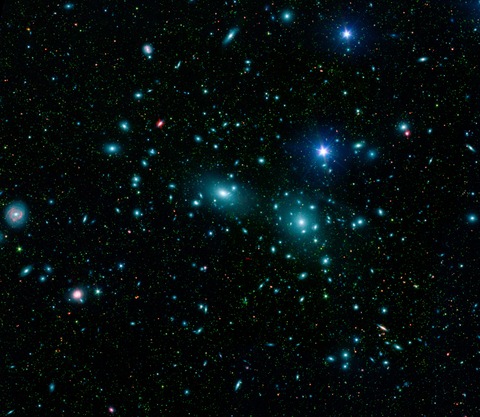 Regarding the expanding universe which recent observations shows is accelerating: I understand that not everything is expanding, just the space between galaxies. Is that correct? If so, why? — Bill Ellena

How a given piece of space expands and contracts with time depends on how much matter and other energy is contained within it, says Dan Hooper, astronomy professor and scientist at the Fermi National Accelerator Laboratory. “So regions with relatively little density expand faster than other regions do.” And some even contract.

Astronomers use metaphors to help the not-so-space savvy visualize all this. Raisin bread is a common one, or a sheet of rubber with thumbtacks on either end. The bread expands, the rubber stretches, but the raisin and thumbtacks stay put. Similarly, space stretches with time; galaxies don’t.

Gravity is the force holding these objects back from expansion, says astrophysicist Richard McCray of the University of Colorado. Objects in orbit, for example, are believed to be held together by the gravity of dark matter. So are clusters of galaxies. “If they have enough gravity to stay together, they don’t join universal expansion,” McCray says.

However, Hooper adds, when all is “averaged over the very large volumes that cosmologists usually think about…the energy and matter is distributed very evenly, and the expansion rate of space is about the same everywhere.”

Astronomers rely on observations of bright, far-flung objects like supernovas to measure the rate of expansion. And they use supercomputer simulations to show that regions of high-matter density stay intact.

Email your Just Ask! questions to science@newshour.org with “Science Question” in the subject line.