Just Ask: How Does Sunscreen Work? 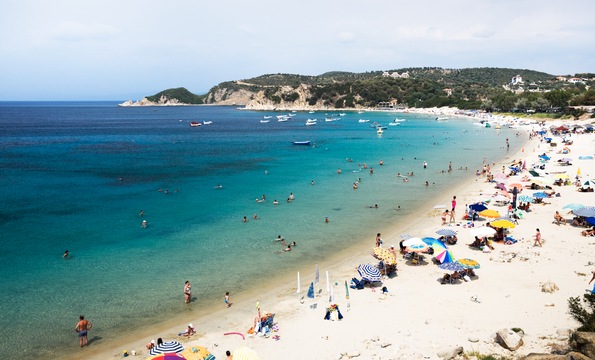 As a cold front settles across the Eastern seaboard, we turn wistfully to thoughts of the sun for this week’s Just Ask! science post. This one comes from a reader, Amanda Teicher, who wants to know: “How does sunscreen work?”

The first widely used sunscreen was a sticky, red substance with a consistency like jelly. It was created during World War II by a man named Benjamin Greene, who distributed the stuff to soldiers in the Pacific for their sunburns. He later founded the American sunscreen company, Coppertone.

Sunscreen’s job is to protect the skin from ultraviolet rays, an invisible form of radiation emitted from the sun. UV rays can damage the skin’s DNA and increase the risk of skin cancer, while accelerating the aging process, and creating wrinkles and pigmentation, says Steven Wang, director of dermatological surgery at Memorial Sloan Kettering Cancer Center at Basking Ridge, N.J.

There are two common types of sunscreen: inorganic and synthetic, and they work by either blocking or absorbing these rays. Inorganic sunscreen is made with zinc oxide or titanium dioxide, and it reflects and scatters UV light rays, says Stefan Wawzyniecki, a professor and chemist at the University of Connecticut and the American Chemical Society. “The tiny particles of oxides act like reflectors of the harmful UVB rays, which are the ones that cause the skin to burn.”

But early zinc oxides were thick and greasy – remember the white-nosed lifeguard? So a second type of chemically synthesized lotion was developed. These lotions are made up of complex molecules that undergo chemical reactions with the sun’s rays, and they have awkward, unpronounceable names like octylmethoxycinnamate, and 4 methylbenzilidine camphor. The chemicals in the sunscreen absorb the UV rays and then release the extra energy as heat.

All sunscreens have an a SPF, a Sun Protection Factor, which can range from 15 to higher than 100. But that number, Wang, says, assumes that you’re using 2 milligrams per centimeter squared of sunscreen. “Most people put on half or a quarter of that amount, so the real protection is only about one-third of the labeled protection.”

Plus, many sunscreens guard against UVB, but not UVA rays. UVB rays, which can damage the cell’s DNA, are known for burning the skin. But UVA rays, which have a shorter wavelength, closer to that of visible light, penetrate deeper into the skin, generating free radicals. This can lead to longer lasting damage. Titanium oxide, for example, is a good UVB, but not a good UVA blocker.

“The sunscreen industry is improving,” Wang says. “But because of the lack of regulatory guidelines, it’s important for consumers to decide which sunscreen has UVA protection.”

Have a question about science or technology for Just Ask? E-mail us at science@newshour.org with “Science Question” in the subject line. Visit our Science page for more coverage.

Editor’s note: Steven Wang’s name was misspelled in an earlier version of this post.