Just Ask: What Would a Supersized Atom Look Like? 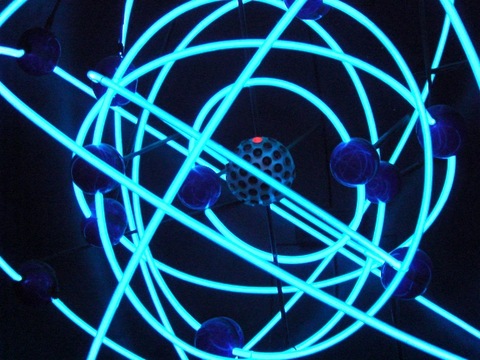 If you expanded an atom to the size of a baseball, what would it look like? And how would the inside look if you sliced it open?

The nucleus is the atom’s central core and contains more than 99.9 percent of its mass. Surrounding the nucleus is a cloud of electrons, which makes up most of the atom’s volume. But the nucleus is tiny, so fantastically tiny, that if the full atom was the size of your thumbnail, the nucleus would be no bigger than one cuticle cell in that thumbnail, says Jim Kakalios, a physics professor at University of Minnesota and author of the book, ‘The Amazing Story of Quantum Mechanics.’ And if the nucleus was expanded to the size of a marble, the outer edge of the atom would be nearly a football field away.

A quick primer on the atom: Atoms are composed of protons, neutrons and electrons. Protons are positively charged, electrons are negatively charged, and neutrons have no charge. Electrons are outside of the nucleus but bound to it by electromagnetic force; protons and neutrons are packed tightly inside, held together by a force that’s roughly 100 times stronger than electricity – the strong force, it’s called.

“The center would be hard and very dense,” says Stephen Ekker, professor of biochemistry and molecular biology at the Mayo Clinic. “And there would be a large volume all around it that’s mostly empty space… If I were to model a nucleus, especially something with 20 or more protons and neutrons, I would get magnetic beads, and I would probably shape them into a sphere.”

But here’s where it starts to get tricky. The traditional atom model that shows electrons orbiting a central nucleus the way planets orbit the sun is a perfectly reasonable picture, according to Kakalios, since the force of attraction between electrons and protons is mathematically similar to the gravitational attraction between planets and their sun in the solar system. But, he says, “it turns out to be completely wrong.” Electrons are defined not by their orbit, but by their wave patterns.

“Just as strings on a guitar have different frequencies and octaves, atoms with different protons and electrons have different wave patterns… The electron can only have certain energies, and this explains a tremendous amount of things. It explains why each atom has a unique fingerprint.”

To make things a little weirder, the electron cloud isn’t an actual cloud, in which electrons can be nailed down to a physical point in space. Rather, it’s an area of probability, in which the size of the atom is defined by the probability that an electron will be found at a certain distance from its nucleus.

So the answer is, if you expanded an atom to a size we could see, it wouldn’t look much like anything.

“There would be a small little spot that would be the nucleus, and there would be a vast region with a buzzing of electrons,” Kakalios says. “And if you start to ask, where is the electron, really?… that’s when you start getting into the late-night philosophical questions. Then it goes into a different realm.”

Email your Just Ask! questions to science@newshour.org with “Science Question” in the subject line.