The America’s Cup sailing race kicked off this week in Bermuda, but a month ago, a different type of competition was held in the island’s lucid waters. It was a contest that pitted chef against chef and robot against beast.

Last August, NewsHour reported on a robot being developed to stop lionfish, an invasive species that has decimated Atlantic coral reef ecosystems due to their insatiable appetites for other fish. This spring, the prototype — called the Guardian LF1 and conceived by the foundation for Robots in Service of the Environment — launched into the open ocean for the first time, as part of a sustainability promotion event for the America’s Cup.

Piloted by a Playstation controller — yes, a videogame controller! — the final prototype cruised through a Bermudian shallows, according to videos of the event, where it zapped and then vacuumed up lionfish. The robot can capture about 10 lionfish before resurfacing.

“I got to tell you, the moment when we caught the first fish in the wild was just so jubilant,” John Rizzi, a retired entrepreneur, Navy veteran and RSE’s executive director, told NewsHour. “The whole team just like exploded in joy.”

WATCH: How do you stop invasive lionfish? Maybe with a robotic zapper

When we first met the RSE team in Bermuda, the prototype wasn’t much more than blueprints and components being individually tested on the island and at the foundation’s headquarters near Boston. A year prior, RSE had formed when Colin Angle, the CEO for iRobot and the maker of the Roomba robotic vacuum, visited friends and marine biologists on Bermuda and they explained how lionfish quickly became king of the Atlantic’s coral reefs.

To suck in a lionfish, a single high-powered thruster sits inside the tube’s back end. Photo by Robots in Service of the Environment

As fierce predators and constant feeders, lionfish escalated in the Atlantic food chain by preying on the naivety of native fish, which don’t recognize lionfish as a threat. On the flip side, lionfish aren’t easily spooked because they have few of their own predators in Atlantic. While on a submersible ride to the bottom of the ocean, we sailed straight up to a lionfish, without it fleeing. RSE’s team planned to capitalize on this boldness by sneaking up behind lionfish and zapping them.

Here’s how they took the idea from paper to practice. After our visit, RSE’s all-volunteer team headed back to Boston, where they began to assemble the components in their engineering lab — also known as Rizzi’s garage.

“The challenge in New England, of course, is everything freezes in the winter time, so we lost access to outdoor pools,” Rizzi said. “In the winter, we put a 300 gallon tank in my garage.” One of the engineers — Rosario Robert — is also a fish aquarium hobbyist, so she helped with the installation, but also cared for and raised lionfish at her house for future testing.

The Guardian LF1, a lionfish zapping robot, approaches the invasive predator, which reacts by opening its mouth and flashing its poisonous barbs — its typical response when threatened. The robot maneuvers its metal electrodes around the lionfish to stun but not kill the animal. A thruster positioned in the main tube sucks up the animal into a vacuum chamber, where it can then be carried to the sea surface. Also, notice how the robot does not shock nearby fish. Video courtesy of Robots in Service of the Environment

One of the first challenges came with the electrocution device — two electrode plates at the front of the robot. Did the team want to stun or outright kill the lionfish? They ultimately opted for the former, because it requires less power, is easier on the electronics and is more humane. The duration of the shock is now less than one second.

At first, the electric current was choosing the path of least resistance and passing around the fish. So RSE recruited an engineer from an electrofishing company in Washington, who tweaked the configuration of the plates and the electricity current waveform so it could strike the fish.

A camera mounted on the robot allows the pilot to view what the robot sees via a laptop screen, and most can figure out the Playstation piloting system within 30 seconds. Photo by Robots in Service of the Environment

Next, came the vacuum. The robot features a central tube — the vacuum chamber — that doubles as the device’s chassis. Small propellers and a motor hang off the sides of this chamber, providing thrust and maneuverability. To suck in a lionfish, a single high-powered thruster sits inside the tube’s back end.

“It was brilliant work by our software guys. [The main tube] thruster sucks in so hard that it actually pushes the whole ROV forward, but you don’t want it to crash into the coral,” Rizzi said. “So other thrusters, that normally drive the ROV forward and backward, counteract the suction.”

In the end, RSE’s team of 20 engineers — along with a set of marine biologists, web developers and marketing gurus — worked together to create a lionfish-hunting device that can run off a 12-volt battery found on most boats. A camera mounted on the robot allows the pilot to view what the robot sees via a laptop screen, and most can figure out the Playstation piloting system within 30 seconds, Rizzi said. 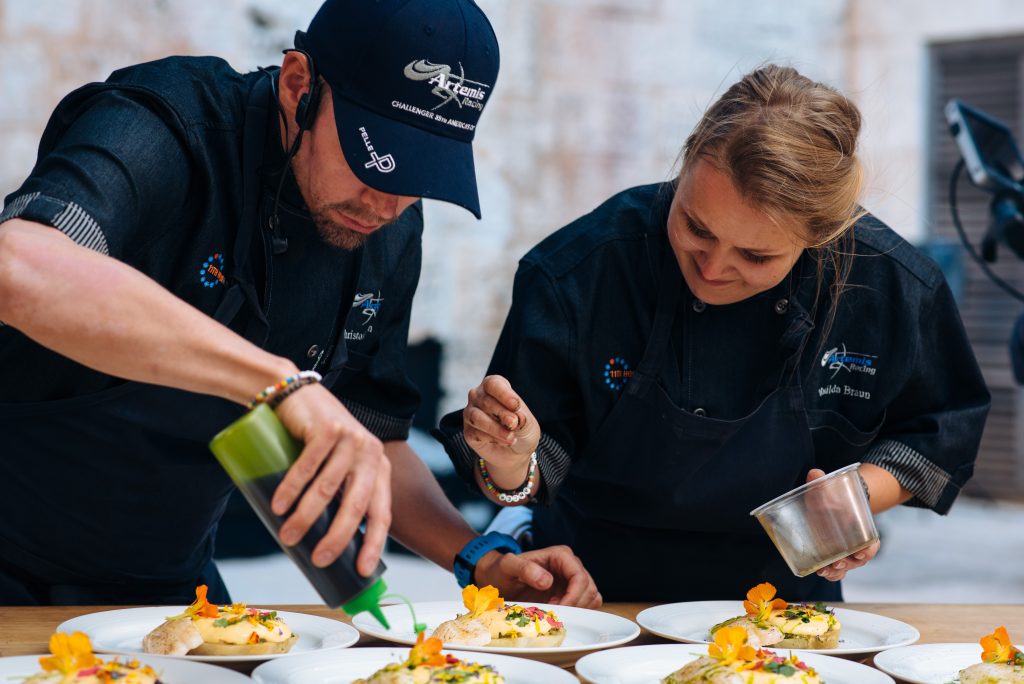 RSE hopes to market the robot to commercial fisherman who want to sell lionfish to restaurants, as well as recreational fishers and sailors.

“Most sailors care about the environment. The environment is their playground,” said Todd McGuire, program director of sustainability organization 11th Hour Racing, which hosted the #EatLionfish Chefs’ Throwdown in Bermuda where the Guardian LF1 debuted publicly in mid-April.

The event invited celebrity chefs from across globe — Gael Orieux from France, Taichi Kitamura from Seattle, Annabel Langbein from New Zealand — to raise awareness about lionfish through the sport of sailing. RSE receives grants from the Schmidt Marine Technology Partners, a program of The Schmidt Family Foundation, which also includes 11th Hour Racing in their portfolio and is how the two learned about each other.

With the initial launch complete, RSE will now turn its attention to fundraising, so they can begin work on a commercial-sized model that can hold 40 to 50 fish at a time and conduct more field testing with the Guardian LF1. The current equipment is built to withstand depths of 300 feet, though the team has not tested this limit yet. They aim to do so this summer off the coast of Boston.

Left: The Guardian LF1, a prototype robot that stuns and collects invasive lionfish. Photo by Robots in Service of the Environment