Sometimes art and science can be in the same boat.

New kayaks, rigged with custom sensors by British scientists, can serenade paddlers with music made from environmental data. The Sonic Kayak records temperature, GPS locations and underwater noise, and then transforms the information into a soundtrack for the cruise. The team behind the project, which published Thursday in PLOS Biology, hope the kayaks can entice citizens into conducting science.

These sonic kayaks began as sonic bikes in the non-profit lab FoAM Kernow, which were built to play certain sounds based on a rider’s location. But when geneticist Amber Griffiths, the lab’s co-founder, decided to move everything to Cornwall, she realized the bikes were impractical for the rugged hills of southwest England. Jokingly, she added “let’s do it with boats” to the office’s “dream board” — a whiteboard for far-fetched project ideas.

Others began to take interest, so in March 2016 Griffiths led a Sonic Kayak development team at an open hacklab, an event for designers to collaborate and work together. Expanding on the bike project, the kayak would pump location-based sounds through speakers mounted to the kayak’s deck. 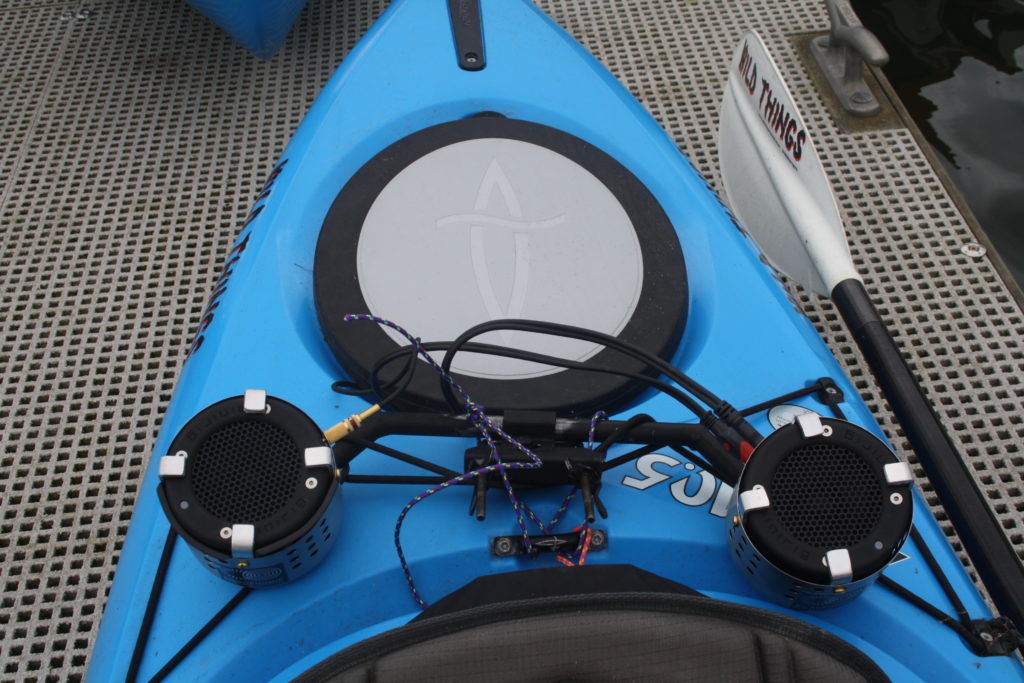 The Sonic Kayak is rigged with speakers and underwater microphones. Photo by FoAM

But then, working with the Bicrophonic Research Institute, Griffiths used her biology background to take things a step further. Her past research looked at adaptations of marine animals to changes in the environment. Inspired by a citizen science project that fitted sensors to surfboard leashes, Griffiths added noise and temperature sensors to the kayak. Underwater sound data is typically collected from sensors affixed to the seafloor, or set adrift in ocean currents.

“I knew from that [past marine biology] work that this type of data is very hard to come by,” Griffiths said in an email to NewsHour.

The Sonic Kayak presents an opportunity to create fine-scale maps of noise and temperature data by collecting new measurements every second. While logging these stats, an onboard computer converts them into sonifications — the auditory equivalent of data visualizations. You encounter sonifications all the time, for example when a clock ticks with every second and chimes on the hour. Other sonifications include sonar and a Geiger counter pings.

Stern launched Smartfin, his own citizen-science effort, in May 2017 to distribute fin-shaped data-collection devices to surfers in the hopes that they advocate for science-based policy. The most important thing for increasing awareness, he said, is by “engaging people’s hearts and souls with the environmental challenge.”

The Sonic Kayak is precisely the tool we need, Stern said, but added that the cost and bulkiness of the equipment will make it challenging to distribute in wide numbers, which is critical for data collection. Building a Sonic Kayak requires supplies available in hardware, tech and online stores, like speakers, thermometers, and underwater microphones called hydrophones.

But Griffiths listed other benefits, such as multitasking. Sonifications allow a scientist to monitor changes in pitch, rhythm, volume, and tempo while engaging their hands and eyes in other tasks. In the case of the Sonic Kayak, they can monitor temperature changes without compromising their focus on safe boating.

In keeping with the crowd sourced, citizen science theme, Griffiths’ team opted to disclose the kayak’s hardware design in an open-sourced journal, so others can use, adapt, and improve the technology. Griffiths hopes this opportunity opens up research to people who typically cannot finance large research projects.

Left: A kayaker enjoys the sonifications from the ocean while paddling. Credit: FoAM