So many questions, so few definitive answers.

Last Saturday, I participated in the taping of a television program called “Louisiana Public Square.” It’s part of a monthly public affairs series that airs on the six non-commercial television stations that comprise Louisiana Public Broadcasting. 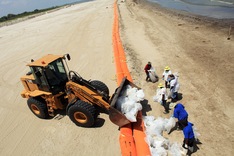 This particular program is called “Crisis in the Gulf: Louisiana and the Oil Spill.” About 60 people gathered in Buras, La., to ask a panel of experts questions about all manner of issues that are still swirling in the wake of the Macondo well blowout.

There were familiar faces both in the audience and on the panel — Plaquemines Parish President Billy Nungesser, retired LSU professor Ed Overton, Acy Cooper, vice president of the Louisiana Shrimpers Association — people I’ve interviewed for the 20-plus stories I’ve done in the region for the NewsHour since late April. Other panelists included Robert Barham, the state Wildlife and Fisheries secretary, Cynthia Sarthou, executive director of the Gulf Restoration Network, and Keith Seihan, a director for BP America.

It’s probably appropriate that the session took place in an auditorium that was heavily damaged by Hurricane Katrina. More than a few ruined buildings still surround the auditorium five years after the storm. The local economy was just beginning to recover from Katrina when the Great Recession hit, and then came the oil spill.

The people asking the questions weren’t journalists — they’re the people who will have to live with the consequences of the gusher for many years to come, and perhaps for the rest of their lives. They wanted to know how long will BP be around to clean up more oil as it comes ashore, whether the $20 billion claims fund is large enough to make everyone who suffered economic damage whole, how long will it take for the fisheries to recover, and how can the multi-billion-dollar Gulf seafood industry overcome three months of very, very bad press.

To the disappointment of many, there weren’t many answers they could take to the bank — particularly about the long-term ecological consequences. Scientists are still in the beginning phases of research projects and more are just getting underway. Some of the studies that have been done so far, like everything else about the disaster, are highly controversial. Scientists working for the National Oceanic and Atmospheric Administration say most of the oil has either evaporated, been consumed by microbes, or been dispersed, but researchers associated with several universities hotly dispute that.

You can watch the full program and find more information about the panelists on Louisiana Public Broadcasting’s website.