Mars has a giant hidden lake. Could there be life in it?

Located at the edge of a more than three-billion-year-old ice cap covering Mars’s south pole, the region known as Planum Australe would rank high on any list of the Red Planet’s least-interesting locales. Frozen, flat and featureless, it seemingly offers little more than windblown dust and drifts of crystallized carbon dioxide for any aspiring explorer to see. Unless, that is, one could somehow peer deep beneath its frigid surface to the base of the ice cap some 1.5 kilometers below, where a lake of liquid water nearly three times larger than the island of Manhattan may lurk.

Discovered by a team of Italian scientists using three year’s worth of data from the Mars Advanced Radar for Subsurface and Ionosphere Sounding (MARSIS) instrument on the European Space Agency’s Mars Express orbiter, the potential lake is at least a few meters deep, and might be a fixed, steady feature of the subsurface. If confirmed, this would be the first-known reservoir of liquid water on present-day Mars—a keystone in the search for past or even present life on the Red Planet, potentially offering fresh clues about how Earth’s neighbor so profoundly transformed billions of years ago from a warmer, wetter world to its current freeze-dried state.

Announced today at a press conference in Rome, the results are detailed in a study appearing in the July 26 edition of Science. Although this is just one detection, the team wrote, “there is no reason to conclude that the presence of subsurface water on Mars is limited to a single location.”

“The presence of a body of liquid water beneath Mars’s south polar cap has various implications, opening new possibilities for the existence of microorganisms in the Martian environment,” said Sebastian Lauro, a study co-author based at Roma Tre University in Rome. “Moreover, it provides a valuable confirmation that the water that once flowed abundantly over the Martian surface in the form of seas, lakes and rivers filled the voids in the subsurface.”

For the past 12 years MARSIS has mapped the Martian underground using beams of low-frequency radar pulses, which can penetrate up to several kilometers beneath the surface. Although they pass relatively unscathed through most substances, these pulses reflect back up to the spacecraft each time they encounter boundaries between different materials, such as the interface of ice and bedrock. 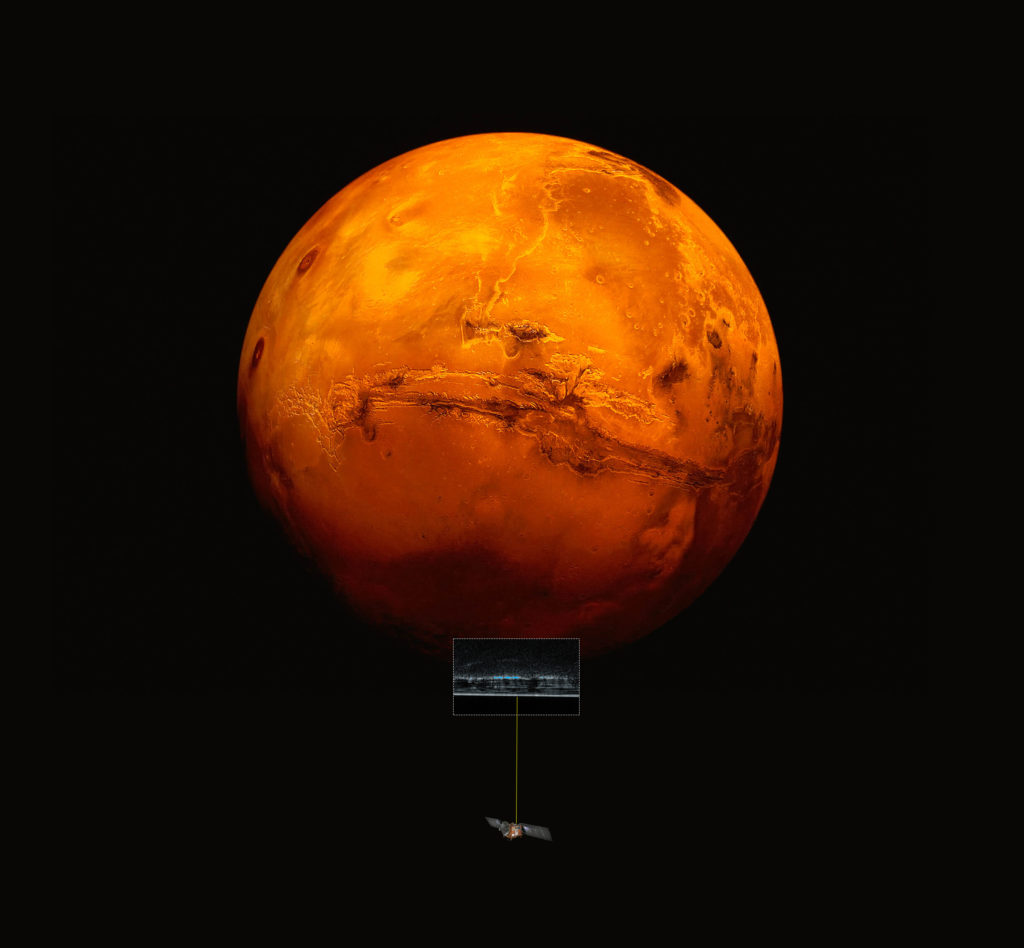 Artistic impression of the Mars Express spacecraft probing the southern hemisphere of Mars. A
radar cross section of the southern polar layered deposits is shown as a detail. The radar cross
section has been tilted 90°. The rightmost white line is the surface radar echo, while the light
blue spots along the basal radar echo highlight areas of very high reflectivity, interpreted as
being caused by the presence of water.
Photo by ESA, INAF. Graphic rendering by Davide Coero Borga – Media INAF

That reflection is particularly strong at interfaces with liquid water, and shows up as a distinctively bright spot in visualizations of the data. Following up on preliminary detections of bright spots beneath Mars’s southern ice cap dating back to 2007, the Italian team reprogrammed MARSIS to employ a more intensive scanning mode, then surveyed Planum Australe 29 times with the instrument between 2012 and 2015.

On Earth those lakes are often connected by channels, forming branching riverlike networks of water that extend across vast spaces beneath the ice.

Time and time again across the entire observing campaign the new MARSIS readings revealed a consistent 20-kilometer-wide bright spot nestled in a bowl-like depression beneath the ice cap in Planum Australe—a feature consistent with a sizable body of liquid water (or, to be fair, with water-saturated sediments more akin to subterranean sludge).

The team then spent almost a year analyzing the data, and another two years writing their paper and attempting to rule out non-aqueous explanations for what they had seen.

Billions of years ago, Mars was a much more Earth-like place where water pooled in seas, carved enormous canyons and bubbled from hot springs. Life, many astrobiologists speculate, may have had no difficulty getting started there. But early in its promising existence the planet somehow lost its way, transforming into a desiccated orb of dried-up ocean-, river- and lakebeds. Robotic missions to the planet’s surface still find surprising echoes of that bygone time, such as patches of water-ice frost forming on rocks as well as water droplets condensing like dew on a lander’s leg. Orbiters, too, have glimpsed what might be rivulets of waterflowing down sun-bathed crater walls at the height of Martian summer.

ESA’s Mars Express has used radar signals bounced through underground layers of ice to identify a pond of water buried below the surface. The bright horizontal feature at the top corresponds to the icy surface of Mars. Layers of the south polar layered deposits – layers of ice and dust – are seen to a depth of about 1.5 kilometer. Image by ESA/NASA/JPL/ASI/Univ. Rome; R. Orosei et al 2018

Perhaps life, too, has managed to endure in some diminished, limited way. But, if so, it would have to contend with a world in which all moisture quickly vanishes in the thin, cold air, leaving the surface dry as a bone.

Still, the water that once flowed across the land had to go somewhere. Some of it was likely lost to space, due to Mars’s diminutive gravitational field, but a significant fraction of the planet’s aqueous inventory never really left, instead just freezing belowground. Now it appears not all of that buried watery wealth is frozen after all.

“The really exciting thing is that this is a stable body of liquid water that was observed in the radar data over three years, not just droplets that have been observed over a short period of time,” said Anja Diez, a glaciologist at the Norwegian Polar Institute who wrote an accompanying commentary about the discovery. The subsurface lake, Diez said, may be similar those found via radar-sounding on Earth beneath ice sheets in Antarctica and Greenland.

Whether below an Earthly glacier or a Martian ice cap, the mechanism for melting is much the same: heat trickling up from below combines with the immense bulk of an insulating blanket of material pressing down from above to form lakes of meltwater.

On Earth those lakes are often connected by channels, forming branching riverlike networks of water that extend across vast spaces beneath the ice. In the late 1980s, Steve Clifford, a researcher now at the Planetary Science Institute, began exploring how similar hydrological activity could occur under both Mars’s southern and northern polar caps, and whether it might feed meltwater into worldwide aquifers he hypothesized should exist beneath the planet’s permafrost. Clifford’s models suggest huge amounts of liquid water could still be hidden in the planet’s depths, providing a globe-spanning refuge for any life that retreated from the ever-more inhospitable surface long ago.

“This finding is potentially of enormous significance,” said Clifford, who was not involved with the study. “Based on analogy with Earth, if water still exists in the subsurface, there is no reason to believe that life which arose on Mars and evolved for underground conditions could not persist there into the present day…. If you do have liquid water as shallow as 1.5 kilometers beneath the surface [at Planum Australe], then liquid water is also likely to be present at greater depths here. And if you have conditions for life in one area of the planet that is in hydraulic continuity with other areas where liquid water also exists, you could have a very substantial subsurface biosphere that has survived since the planet’s early history.”

That life, however, would have to contend with another key factor making its aquatic environs possible: mineral salts that leach out of rocks and sediments to act as antifreeze. Suffusing the meltwater, the salts would create brines that remain liquid far below the typical freezing point of pure water. Such salts are known to exist in abundance in some Martian rocks, and are the most likely cause of the dewlike droplets and crater-wall rivulets previously observed on the planet’s surface.

But Clifford holds out hope subsurface geothermal hotspots like those that power volcanoes and hot springs on Earth could sufficiently heat portions of the Martian underworld to allow liquid reservoirs to exist there without the need for life-sabotaging salt levels. Such a hot spot could, in fact, be responsible for the MARSIS team’s newfound lake. 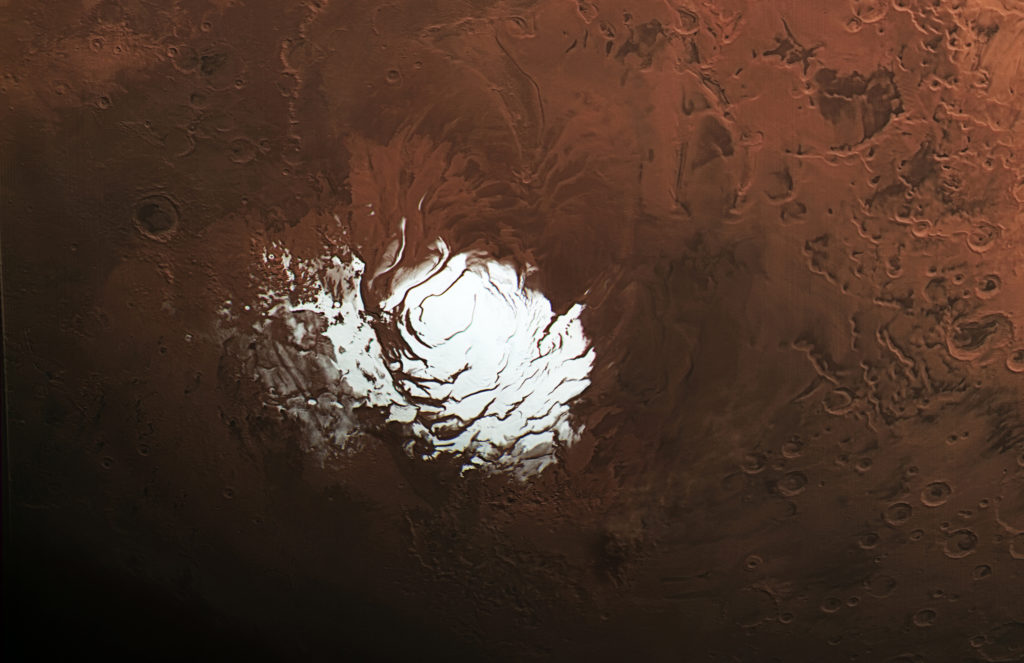 These conjectures must, for now, remain untested. The MARSIS instrument lacks sufficient sensitivity and resolution to clearly determine the thickness of this deposit or whether it is in fact connected to other similar bodies, although studies using more advanced radar instruments on an as-yet-unbuilt next generation of orbiters could clarify such details. For that matter, the detection itself is as yet uncorroborated: Another radar-sounding instrument called SHARAD (for shallow radar) onboard NASA’s Mars Reconnaissance Orbiter has also repeatedly scanned Planum Australe and other regions in search of buried water.

But its beams cannot penetrate as deeply, and it has not replicated MARSIS’s detection.

Even so, according to Bruce Campbell, a SHARAD team member and senior scientist at the Smithsonian Institution, “it is possible that a targeted effort [by SHARAD] to collect data on more tracks across this region could build up enough echo strength to detect the reflector seen by MARSIS.”

Ultimately, “ground truth” may be required to solve the mystery of just how much water is locked away in Mars’s underworld. But there are presently no public or private plans to build or launch missions, robotic or human, that would be capable of drilling or melting down to the depths probably required to directly sample meltwater anywhere on the planet—which, Clifford said, might be for the best.

“The possibility that life could currently exist somewhere beneath the polar ice reinforces the point that we must take care that our investigations do not needlessly contaminate Mars,” he said. “That could not only make the result of any life-detection experiment ambiguous but could also contaminate a habitat that may be interconnected on a global basis, leading to a very serious impact on any native biosphere. I worry that unless we are very careful, we could end up responsible for the extinction of the very first life we ever detect on another planet.”

This article is reproduced with permission from Scientific American. It was first published on July 25, 2018. Find the original story here.

Left: Radar observations by the European Space Agency have revealed what appears to be a buried lake on Mars, the first-ever stable reservoir of liquid water found on the Red Planet. Image by NASA/Goddard Space Flight Center Scientific Visualization Studio

This aquatic grass could help shellfish threatened by ocean acidification