Mechanics of a Nuclear Meltdown Explained 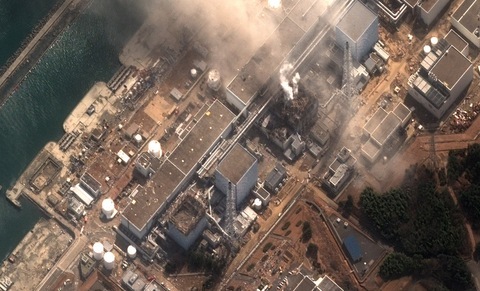 After a powerful explosion on Tuesday, Japanese workers are still struggling to regain control of an earthquake and tsunami-damaged nuclear power plant amid worsening fears of a full meltdown.

Which raises the questions: What exactly is a nuclear meltdown? And what is a partial meltdown?

“This term ‘meltdown’ is being bandied about, and I think people think that you get the fuel hot and things start melting and become liquid,” said Charles Ferguson, physicist and president of the Federation of American Scientists. “But there are different steps along the way.”

Inside the core of the boiling water reactors at Japan’s Fukushima Dai-ichi facility are thousands of zirconium metal fuel rods, each stacked with ceramic pellets the size of pencil erasers. These pellets contain uranium dioxide.

Under normal circumstances, energy is generated by harnessing the heat produced through an atom-splitting process called nuclear fission. As uranium atoms split, they produce heat, while creating what’s known as fission products. These are radioactive fragments, such as barium, iodine and Cesium-137. In a working nuclear reactor, water gets pumped into the reactor’s heated core, boils, turns into steam and powers a turbine, generating electricity.

“Basically, each uranium atom splits into two parts, and you get a whole soup of elements in the middle of the periodic table,” said Arjun Makhijani, a nuclear engineer and president of the Institute for Energy and Environmental Research.

A reactor is like a pressure cooker. It contains boiling water and steam, and as temperature rises, so does pressure, since the steam can’t escape. In the event of a cooling failure, water gets injected to cool the fuel rods, and pressure builds.

This superheated core must be cooled with water to prevent overheating and an excessive buildup of steam, which can cause an explosion. In Japan, they’ve been relieving pressure by releasing steam through pressure valves. But it’s a trade-off, as there’s no way to do this without also releasing some radioactive material.

A nuclear meltdown is an accident resulting from severe heating and a lack of sufficient cooling at the reactor core, and it occurs in different stages.

As the core heats, the zirconium metal reacts with steam to become zirconium oxide. This oxidation process releases additional heat, further increasing the temperature inside the core. High temperatures cause the zirconium coating that covers the surface of the fuel rods to blister and balloon. In time, that ultra-hot zirconium metal starts to melt. Exposed parts of the fuel rods eventually become liquid, sink down into the coolant and solidify. And that’s just the beginning of a potentially catastrophic event.

“This can clog and prevent the flow of more coolant,” Ferguson said. “And that can become a vicious cycle. Partial melting can solidify and block cooling channels, leading to more melting and higher temperatures if adequate cooling isn’t present.”

A full meltdown would involve all of the fuel in that core melting and a mass of molten material falling and settling at the bottom of the reactor vessel. If the vessel is ruptured, the material could flow into the larger containment building surrounding it. That containment is shielded by protective layers of steel and concrete.

“But if that containment is ruptured, then potentially a lot of material could go into the environment,” Ferguson said.

Meltdown can also occur in the pools containing spent fuel rods. Used fuel rods are removed from the reactor and submerged in what’s called a spent fuel pool, which cools and shields the radioactive material.

Overheating of the spent fuel pools could cause the water containing and cooling the rods to evaporate. Without coolant, the fuel rods become highly vulnerable to catching fire and spontaneously combusting, releasing dangerous levels of radiation into the atmosphere.

“Water not only provides cooling, but it provides shielding,” said Robert Alvarez, a nuclear expert and a senior scholar at the Institute for Policy Studies. “[Radiation] dose rates coming off from spent fuel at distances of 50 to 100 yards could be life-threatening.”

Since spent fuel is less radioactive than fuel in the reactor core, these pools are easier to control, said Peter Caracappa, a professor and radiation safety officer at Rensselaer Polytechnic Institute. But they’re also less contained. “If material is released, it has a greater potential to spread because there’s no primary containment,” he said.

Most of the problems with the backup generators were caused by the tsunami flooding them. But Makhijani suspects that unseen damage from the earthquake may be adding another challenge.

“I think because the earthquake was so severe, there’s probably a lot of damage becoming apparent now,” he said. “Valves might have become displaced, and there may be cracked pipes. We can’t know, because there’s no way to suspect. Yesterday, they had trouble releasing a valve. And they’ve had trouble maintaining coolant inside, which means leaks.”