Editor’s note: Science Magazine retracted the study described below on May 26, 2017, citing the following reasons: “(i) lack of ethical approval for the experiments; (ii) absence of original data for the experiments reported in the paper; (iii) widespread lack of clarity concerning how the experiments were conducted.”

When exposed to microplastics, baby fish stop eating natural food and prefer consuming the pollutant, according to a report from ecologists at Uppsala University in Sweden. The dietary switch derails the basic instincts of the fish, the researchers found, elevating the likelihood of being caught by predators. The findings may explain why populations of European perch (Perca fluviatilis) — the main species analyzed in the study — have declined in the Baltic Sea.

“Perch are common and popular recreational fish in Sweden,” said Oona Lönnstedt, an Uppsala ecologist and the project’s leader. “But they have seen continuous and rapid declines in density and abundance since the mid-1990s in the Baltic Sea.”

If this process takes place in the marine ecosystem, plastics can affect the health of food webs, which include humans as an apex predator.
The trend is especially true for young perch, and the cause remains unknown. Some experts blame habitat destruction, while others cite too much salty runoff from land due to climate change. But two years ago, Lönnstedt and her colleagues set their sights on microplastics as a leading factor.

Microplastics litter the Earth’s oceans. The particles typically measure less than five millimeters (one-fifth of an inch) in size, and recent estimates suggest up to 236,000 metric tons wash into the oceans each year. That’s equivalent to the weight of 1,300 blue whales, and it may represent just one percent of the total contained in oceans. The Baltic Sea carries about 25 to 40 plastic particles per gallon of water — or 229 quadrillion pieces across its entire volume.

Sans pollution, the eggs hatched about 96 percent of the time, but birth rates fell with both average (89 percent) and extreme (81 percent) quantities of microplastics. 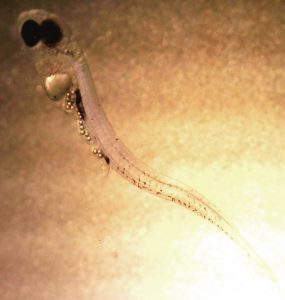 The consumption of microplastics may reduce energy levels in larval fish. Photo by Oona Lönnstedt

Things got weirder when the animals grew older. The researchers raised European perch for 10 days in regular water with the perch’s favorite food, brine shrimp, and then added microplastics to the tanks.

“The biggest surprise in this study was the fact that larvae preferentially ate microplastic particles,” said Lönnstedt, whose study was published June 2 in the journal Science. “They literally stuffed themselves with the microbeads and ignored their natural food source.”

One way baby perch survive their vulnerable youth is by smelling predators. Much like stinky gym socks, predators exude repulsive scents that the baby fish can sniff and avoid. When the team squirted drops of these chemical alarms into the tanks, they found fish with microplastics were less likely to flee. The microplastics impaired the perch’s olfactory reflexes. 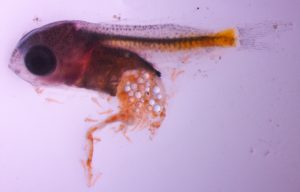 There could be two potential reasons for this. Either the plastic particles exude toxic chemicals that interfere with nerve development, effectively altering their behaviors and olfactory responses,” Lönnstedt said. “Alternatively, the fish are lacking so much energy, due to plastic-filled stomachs, that they simply have no energy…and consequently ignore the chemical threat cues of predators.” 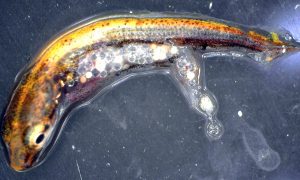 Pike larva with burst stomach due to microplastic consumption. Photo by Oona Lönnstedt

This dampened fear response translated into real-world doom. In a separate experiment, the team added a perch predator — Northern pike (Esox lucius) and then monitored survival for 24 hours. Without microplastics, 46 percent of baby perch survived the night. Average microplastic levels cut 24-hour survival by another 20 percent. None survived against predators with high levels of microplastics.

Perch may not be suffering alone. Since completing this study, Lönnstedt and her colleagues have recorded similar (unpublished) patterns in other species of larval fish, both tropical (coral reef damselfish) and temperate (pike and flounder).

“In this way, the plastic contaminants are transferred from the small prey fish to the larger predatory pike and are likely to bioaccumulate in the food chain,” Lönnstedt said. “If this process takes place in the marine ecosystem, plastics can affect the health of food webs, which include humans as an apex predator.”

If we can target the chemical that is most harmful at least this could hopefully be phased out of production.
The next step in the project will be examining the process in nature. They’ve found European perch in the Baltic Sea with bellies filled with plastic, but this needs to be studied more in depth, according to Lönnstedt. The other open question is whether all types of plastic cause these problems. This study used polystyrene, a common and inexpensive polymer found in fishing floats, buoys, packaging and insulation, toys, kitchen appliances, lids, bottles and disposable cutlery.

“Now we know that polystyrene is harmful, but we also need to compare it to the other common polymers such as polyethylene and PVC,” Lönnstedt said. “If we can target the chemical that is most harmful, at least this could hopefully be phased out of production.”